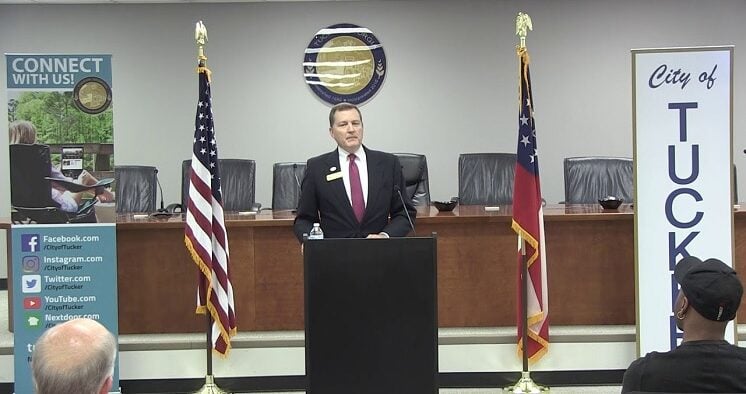 Frank Auman gives the 2018 State of the City speech. Image obtained via the city of Tucker.
Share

Tucker, GA — Juneteenth recently became an official paid holiday for Georgia state employees, but the city of Tucker has no plans to change the city’s decision to remain open for the holiday.

Many other local cities decided to close their doors in honor of Juneteenth before the state recognized it. Tucker rejected that idea, citing the need to keep summer camps open, even though they already were scheduled to be closed. When Tucker Observer pointed this out to the city, the city changed its camp schedule, so camps would be open on Monday, June 20, the day the holiday will be officially observed. The city said the initial decision to close camps that day was a “clerical error.”

While Tucker is planning a celebration to mark the occasion, Mayor Frank Auman is proposing that Dec. 6, not June 19 should be the day Georgia marks the end of slavery. He argues that Dec. 6 is a more appropriate date because the 13th Amendment — which abolished slavery in the United States —  became effective when Georgia became the 27th state to ratify it, Dec. 6, 1865.

A combination of the words “June” and “nineteenth,” the holiday commemorates the day when Black slaves in Galveston, Texas, learned they were free. President Abraham Lincoln signed the Emancipation Proclamation in 1862 and it went into effect on Jan. 1, 1863. But the slaves in Galveston weren’t informed until June 19, 1865.

Juneteenth has been celebrated on June 19 since 1866, but became a federal holiday in 2021. The holiday had to be approved at the state level for state employees to receive paid leave. Gov. Brian Kemp signed legislation on April 6 making Juneteenth a holiday for state employees.

In February, City Manager Tami Hanlin presented the 2022 calendar with 11 holidays. After a long discussion, City Council voted 5-2 to approve the calendar without the addition of Juneteenth. Councilmembers Noelle Monferdini and Alexis Weaver voted no.

When asked if Tucker planned to amend its decision about Juneteenth in light of the state holiday, Mayor Auman said that’s up to the City Council.

Unlike the state of Georgia, Tucker has never had an ordinance about the number of paid holidays, said Auman.

“I can’t really speak to what the city might do about Juneteenth, as beside me, there are six other members of our council who will decide it. But I can say that we will be reviewing our whole vacation and holiday policy along with our Council, Board, Commission and Authority meeting schedules before we approve our next annual calendar,” Auman wrote in an email to Tucker Observer.

Tucker typically approves the city’s calendar in the fall.

Auman said, “Tucker has planned a community celebration of Juneteenth this year” but it is being organized by a group of citizens, not the city.

Councilmembers Virginia Rece, Cara Schroeder and Alexis Weaver are working with a group of residents to plan a Juneteenth event on June 18 in Tucker.

“The city is partnering with Camile Mahdi, who is leading the organization Citizens for Family Activities in Tucker, to organize our Juneteenth event,” said Rece. “I believe our Juneteenth event will be a true reflection of shared collaboration and partnership throughout our community to plan this historic celebration.”

When asked about plans for the Juneteenth celebration, Auman told Tucker Observer that instead of marking the emancipation of enslaved people on June 19, his preference would be to celebrate on Dec. 6.

“As for my own view on Juneteenth, I’m fairly particular about accurate history, so I wrote the following summary for your article. My own preference is that we would celebrate Dec. 6 as the appropriate day to recognize the abolition of slavery in the United States,” he said. “I took the time to write all this so that people might understand that this and many other issues are not nearly so simple as they are often portrayed, and that the facts of history matter. I hope it helps.”

“As to whether it would be a paid day off, a floating or ‘optional’ holiday, how many of which kind we should have for city employees, and so on, that is a function of how the council wants to treat it in light of our budget, providing services to our citizens, and a number of other factors,” Auman said.

See Mayor Frank Auman’s full statement about celebrating the end of slavery on Dec. 6 instead of June 19:

“Here’s what I know of the history and significance of Juneteenth in the context of the end of slavery in the United States:

Abraham Lincoln was elected president on November 8, 1860. By the time he actually took office on March 4 of 1861, at least seven states had already seceded from the United States, mostly in reaction to his election as a Republican and an abolitionist. The war began about five weeks later, on April 12, when Confederate forces fired on Fort Sumter in Charleston Harbor. From there, the war went unexpectedly badly for the United States, and lasted much longer than most expected.

History is clear that although he favored an end to slavery, Lincoln’s first priority was to preserve the Union. He struggled over how to balance the two, fearing that focusing the war too much on the slavery issue could make it more difficult to reconcile the northern and southern states after the war, and that using too heavy a hand on the issue might make things worse rather than better for the war effort as a whole. Over the course of 1862, however, as the war dragged on, losses on both sides mounted, and it became apparent that it would not be over soon, Lincoln began to consider a plan to free the slaves in the southern states, both as a way of asserting his own values, and as a measure to help win the war.

Of course, the president does not now, and never has had, the power to enact such things on his own accord. But in consultation with his cabinet and many other advisors, he became convinced he could do so under an executive order, applying it only to the states that were in rebellion, using his war powers as authority. Even so, it was controversial, and many did not believe he had such powers. Nonetheless, Lincoln determined that if the progress of the war continued poorly for the United States, he would proceed with his plan. Ultimately, on January 1 of 1863, he issued the Emancipation Proclamation.

As expected, doing so changed the character of the war, focusing it much more on the slavery issue. Even though slavery remained legal in the United States, the Emancipation Proclamation provided motivation for the troops and people of the United States, who were largely for the end of slavery, and it allowed former slaves in the south to join the Union army. In many ways, it turned the tide of the war. Throughout 1863 and 1864, everywhere the Union army regained territory and the Proclamation was enforced, there was great celebration by and on behalf of former slaves.

Toward the end of 1864, it became clear the United States would win the war. Through the fall, Sherman’s army marched across north Georgia, through Atlanta, and on to Savannah, with Sherman famously presenting Savannah to Lincoln as a ‘Christmas gift.’ During this time, old worries arose again that since the freedom of slaves in the south was a function only of an executive order, war powers, and those states being in rebellion, then when the war ended and those states rejoined the union, the slaves would no longer be free unless slavery had actually been abolished in the United States. The only way that could happen was through legislation, as opposed to Lincoln’s executive order. And so, Lincoln and many Congressional leaders of the northern states undertook to pass an amendment to the United States Constitution, permanently abolishing slavery in all of the United States.

The Congress, controlled by Republicans from northern states, and without the southern states represented, passed the 13th Amendment on Jan. 31, 1865, and it was sent to the states for ratification. It required three-fourths of the states to ratify it before it became law. Importantly, the Congress required the southern states who had seceded to ratify it as a condition of their being readmitted to the union, before they could again be represented in the United States government.

Ten weeks after the passage of the 13th Amendment, the war ended with Lee’s surrender at Appomattox on April 9. Six days later, Lincoln was assassinated by a southern sympathizer. A little over two months after that, on June 19, 1865, federal troops arrived in Galveston Bay, Texas, taking control of the state, and for the first time informing the enslaved people there that they had been freed by the Emancipation Proclamation two and a half years earlier. Although the war was over, and Lincoln was dead, Texas was still formally in a state of rebellion, and those formerly enslaved people were, for the time being, free. The day would be remembered as Juneteenth, their day of independence, and was celebrated in Texas every year after, beginning in 1866.

The end of the war in April had set off the conversations about how the south would be treated in the war’s aftermath, and how they would be readmitted to the United States, including ratification of the 13th Amendment. Those ratifications happened in northern and southern throughout the balance of 1865. The 13th Amendment became effective when Georgia became the 27th state to ratify it, making December 6, 1865 the day slavery was finally, permanently abolished in the United States.”