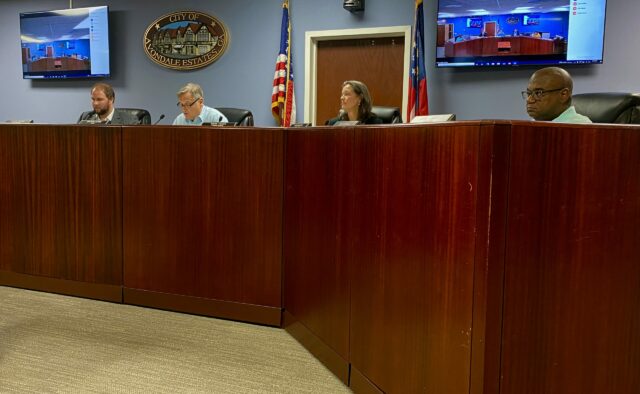 The Avondale Estates City Commission met on Wednesday, May 25, to consider a variance request for an affordable housing development. Photo by Zoe Seiler.
Share

TBG Residential had also requested a Tier 2 waiver to allow some portions of the building to exceed the height limitations, but withdrew the request prior to the May 25 meeting.

“The city agreed that reducing the size to allow for the reduction in the size of the unit was important to be able to provide affordable units as this project is entirely affordable,” Assistant City Manager Shannon Powell said. “Further, providing a diversity of housing types is consistent with our comprehensive development plan. For those reasons, both the staff is recommending approval of this variance, as did the planning, zoning and architecture review board.”

Kevin Buckner, president of TBG Residential, said that 1,300 square-foot units would be too expensive to build and bring affordable housing to the city.

The city commission approved a conditional use permit for the affordable housing development at the April 28, 2021, board meeting.

The project, Overlook at Avondale, is planned to be three stories with 66 units, which breaks down to 27 one-bedroom units, and 39 two-bedroom units serving seniors whose income is 40-80% of the area median income. TBG Residential has not yet told the city commission what the rent prices would be.

Amenities will include podium parking, a community room, a computer center and a fitness center, according to TBG Residential’s zoning application.

“The site plan identifies space for a future Washington Street extension,” the memo says. “The development team proposes to set aside the land for the road and has stated their intention to build it. The site plan also illustrates a path on the north-south access instead of a road, as is called for in the adopted street grid and codified in the zoning code. The development does not meet all standards required by the City of Avondale Estates Zoning Ordinance; therefore, the applicant has requested relief to accommodate the development as proposed.”

During the meeting, Buckner said TBG Residential’s plans lay out options that are a compromise to the city’s adopted street grid.

“We’ve given the city lots of options. It hasn’t given the city 100% what they want, but our options have really laid out nice compromise options for the city in terms of giving you the connectivity that you want on Washington Street, good accessibility between Washington and Franklin or Potter Avenue,” Buckner said.