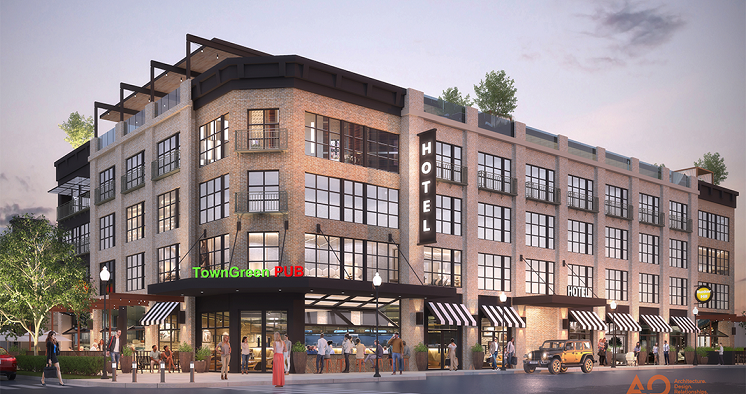 Avondale Estates, GA — The Avondale Estates City Commission, at its May 11 meeting, approved of an intergovernmental agreement with the Downtown Development Authority to transfer city-owned property to the DDA to facilitate the redevelopment of properties in line with the city’s downtown master plan. This includes developing a hotel near the Town Green.

The DDA approved the IGA at their May 10 meeting. One amendment was made to the agreement to include language that places a restriction on the property to provide for public restrooms at the Town Green marketplace. It was also amended to include the property at 6 Lake Street, which is part of the parking lot behind Finder’s Keepers that’s owned by the city, City Manager Patrick Bryant said.

“The next step in the process, following the approval of this agreement, would be for the DDA to begin negotiating memorandums of understanding with each of the development partners,” Bryant said. “Those memorandums of understanding would act as a bridge to eventual development contracts with each of those partners. But as we have explained before, the MOU phase is necessary to provide the development teams with the confidence they need to move forward with construction documents and financing pursuits.”

“I wish I could make it a unanimous vote tonight, but I’ve decided not to vote for the IGA,” Laratte said. “I want to be clear about why. It’s because I do believe that we should have a statement or a clause in there talking about restricting national chains from being part of this moving forward.”

He added that the hotel is a great addition to the city and is a worthwhile project, but he couldn’t reconcile his thoughts on the national chains.

There are prohibited use restrictions in the IGA to restrict things like big box retailers, small box discount stores, and more, that do restrict, to a certain extent, a national chain, Commissioner Lisa Shortell said. City staff has advised the board and DDA to restrict use and not ownership in terms of the future businesses.

During the Avondale Estates City Commission work session on April 27 the city presented plans for the commercial development of the Town Green, the boutique hotel and an 11-unit town home development.

The DDA will secure certain portions of 90 N. Avondale Road to consolidate it with Edwin Jarvis and Finder’s Keepers Fashions and 4 Lake Street. These pieces of properties are located next to the Town Green. A retail project with a full-service hotel with 80-82 rooms, a rooftop event space, ground floor retail and a wrap-around public parking deck is planned for the area.

The hotel would be flagged by a major chain to get on the national reservation system.

“Being flagged by potentially Marriott or Hilton, it’s really a byline. It’s not going to be a Marriott. It would be a boutique hotel, like Avondale Hotel by Marriott, in the title subscript,” said Jason Graham, a partner of ForrPlaces, which is the hotel developer. “If we’re just a boutique and not in that national reservation system, it’s hard to get into if you’re just a mom and pop. To be flagged by a major chain is different than being a major chain. I’m an owner of a mom and pop here, the Beer Growler right down the street, and we understand the importance of being a community business. We’re going to try to keep that community business feel even though we’re going to have that behind us.”

For the parking deck, the city has an opportunity to apply for a rural downtown development grant through the state Department of Community Affairs. The grant program totals $17 million and DCA has to award the grants by June 30. The award amounts DCA is poised to grant will be between $1 million to $5 million dollars with a 10% match, Bryant said.

The project also cannot be revenue producing during the grant award period, which is through June 30, 2024.

The current cost of the parking deck is $6.1 million. City staff previously proposed funding the parking deck through the money raised from the sale of the 84, 88 and 90 N. Avondale Road properties and through revenue generated largely from the hotel into the tax allocation district.

According to the city’s website, “Briefly speaking, in a TAD, county property taxes generated above a baseline level, which has now been exceeded, stay in the City, and can be used on infrastructure investment back in the district.”

“However, if we applied for this grant, it would be for that project and if we were awarded the maximum award, coupled with existing funding that we already have available, we could go ahead and pay for the deck in full upfront,” Bryant said. “The requirement, of course, is that we follow the Georgia State Public Works bidding process. So, we have negotiated with the hotel development team that the city will be the owner of the design documents for the deck. If awarded the grant, [we] would then own the deck outright as a public amenity.”

The city commission will consider, at its next meeting, appropriating $500,000 for the match requirement, so the city can apply for the grant.

The area nearby would be a live-work residential town home community with 11 units, which would be constructed simultaneously to the hotel-retail project. This project was proposed by Fabric Developers, the company developing the Town Green. The bottom level of the town homes will be retail or office space.

The DDA will also obtain the parcels at 64, 68 and 70 N. Avondale Road for the Town Green mixed-use market development as a multi-tenanted ground level neighborhood restaurant and retail row, according to the IGA. The properties are near the intersection of North Avondale Road and Lake Street, which has been planned to be the commercial development of the Town Green.

“I think this is an exciting day for our city,” Mayor Pro Tem Brian Fisher said. “I think if you go back and look, the city’s owned this property for close to 10 years, and have gone through a lot of iterations of what it could be. We’ve finally gotten to a point where I think it’s something where, for the most part, I think all of our residents are really proud to see.”

He added that the project will activate the downtown area and Fisher looks forward to seeing the DDA work through this process.

“I got a lot of confidence in the DDA and that team of the collective shared vision that we have for that space, and I think that we’re going to look back a couple years from now and be really proud of what it is that we’ve been able to accomplish down there,” Fisher said.