Crash at North Decatur and Superior sends one driver to hospital; other driver cited

Crash at North Decatur and Superior sends one driver to hospital; other driver cited 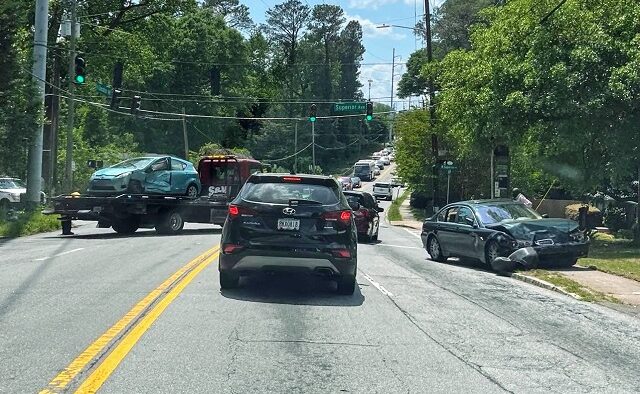 The crash occurred on Monday, May 2, at the intersection of North Decatur Road and Superior Avenue and Decatur Police responded at 2:47 p.m. Photo provided to Decaturish
Share

Decatur, GA — One of Decatur’s most notorious intersections was the scene of yet another crash on Monday, May 2.

The crash occurred at the intersection of North Decatur Road and Superior Avenue and Decatur Police responded at 2:47 p.m., Sgt. John Bender said. The crash investigation revealed a green BMW was traveling eastbound on North Decatur Road and blue Toyota was stopped at a red light on Superior Avenue. Bender said as the BMW reached the intersection, a the traffic light for eastbound traffic changed to red.

“The BMW failed to stop for this light and struck the Toyota as it crossed North Decatur Road,” Bender said. “The driver of the Toyota sustained non-life threatening injuries and was transported to an area hospital for treatment. The driver of the BMW received a citation for failure to obey a traffic control device.”

The intersection has been the scene of numerous crashes over the years and calls to improve things haven’t yielded any results.

Mayor Patti Garrett has said it could cost $1.5 million, although that’s an older estimate and the price is likely higher now. She told Decaturish that the intersection is complicated because most of North Decatur Road is in unincorporated DeKalb County.