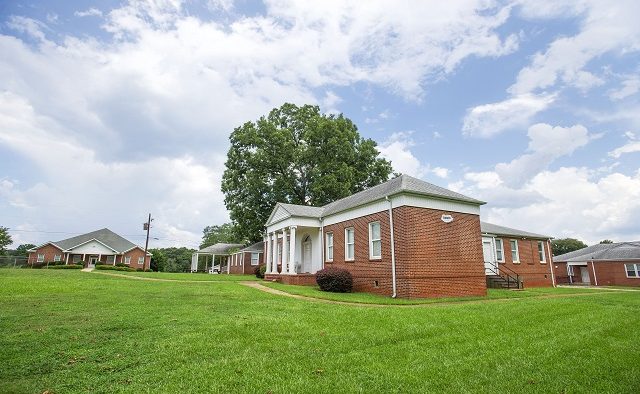 A view of cottages at Legacy Park on South Columbia Drive in the city of Decatur on August 12, 2020. The park occupies the former site of the United Methodist Children’s Home. Photo by Dean Hesse.
Share

Decatur, GA — The Decatur City Commission approved a contract for accessibility improvements to the Williams and Gillespie Cottages at Legacy Park.

A concrete wheelchair ramp will be added to Williams Cottage, and the bathrooms in both cottages will be renovated to be ADA accessible.

At the May 16 meeting, the city commission established a project budget of $46,000 and awarded a contract to CGS Waterproofing for $42,000 for the improvements. The project was approved by a 4-1 vote, with Commissioner George Dusenbury casting the opposing vote.

Dusenbury began his comments by noting that he supports the work the staff has done to bid out this work, and that of the Legacy staff to implement a master plan that calls for office space at Legacy Park. He has also supported the acquisition of the former United Methodist Children’s Home to become Legacy Park and the affordable housing plans for the park.

“I’m also a big proponent of parks and recreation,” Dusenbury said. “I’m concerned that we don’t currently have adequate recreation facilities for our residents and our school students. We have a high school that has to host home matches for its tennis team outside of Decatur.”

“I believe that providing our residents the parks and recreation facilities that they need is a core responsibility of the city and this commission, and we should use as much of Legacy Park as possible to meet that need,” he added.

When the city acquired the land, there were about three dozen buildings, and the city didn’t have use for them. The Legacy Park Master Plan states the city should partner with nonprofits and community organizations that can repurpose the existing core buildings on the property.

“I do not support the dedication of land in what is Decatur’s last opportunity to build a big park to meet the current and future park and recreation needs of our residents for office space,” Dusenbury said. “We’re not just taking potential park land for offices. People who are coming to offices, they drive cars and use driveways and parking spaces. Land at Legacy Park used for this purpose is not available for park or recreation use.”

The Williams and Gillespie Cottages are two of the existing buildings that were on the property when the city purchased the United Methodist Children’s Home. They house nonprofit partners like the Refugee Women’s Network and the Frank Hamilton School. The cottages serve as office space and classroom space.

The master plan also notes that most of the existing buildings were adapted for alternative uses, including office space, meeting space, housing and maker space.

The Decatur Public Facilities Authority issued tax-exempt bonds to purchase the property. Due to the tax-exempt nature, the city is limited in how the property can be used and who can lease space.

In other business, the stone dairy barn at Legacy Park is on its way to being an outdoor classroom space. The phase I project of repairing the roof has been complete, and phase II will focus on the interior of the barn. The Decatur City Commission, at its May 16 meeting, established a project budget of $160,000 and awarded a contract to CGS Waterproofing for $138,500 to improve the barn.

The dairy barn was built in 1914 and is one of the oldest structures on the Legacy Park property. It is the last remaining building associated with the farming heritage on the site, said Felix Floyd, facilities maintenance superintendent, in a memo.

“The barn improvements contract being recommended includes concrete paver entryway, a wooden deck on the pond side of the barn, the addition of sliding barn doors, operable shutters, concrete topping for the floor, circulation fans, new lighting and minor stud wall modifications,” Floyd said in the memo. “The interior work is the second phase of a two-phase project intended to upgrade the barn for use as an open-air facility similar to the park pavilions located in other city-owned parks.”

The building won’t have plumbing or an HVAC system, but an electrical system will be improved. The barn will eventually serve as a classroom space for environmental classes and field trips using the pond and conservation area.

“It will allow for storage of equipment and supplies related to these activities. The space can also function as a concession space for athletic events and provide a more rustic event rental option to the recently completed dining hall renovation,” Floyd said in the memo.