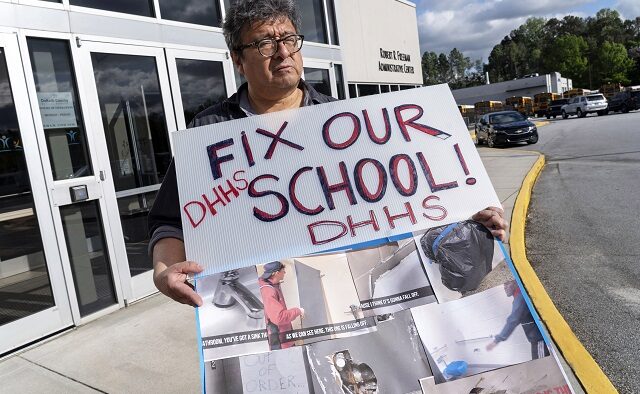 DeKalb County, GA — With the state Department of Education breathing down its neck and a deadline looming, the DeKalb County School Board will once again consider the modernization of Druid Hills High.

The project is the only item on the agenda for a virtual special called meeting on May 31 at 2:30 p.m., one day before a June 1 deadline to add the project to the district’s facilities plan.

The Georgia Department of Education has told the DeKalb Board of Education that they must add Druid Hills High School back to the district’s facilities plan by June 1 or risk losing state facilities funding.

Druid Hills High School has been at the center of a controversy that has kept the district in the public eye. Board Chair Vickie Turner, Vice Chair Diijon DaCosta, and board members Dr. Joyce Morley and Anna Hill voted to remove the 95-year-old facility from the district’s five-year facilities plan in February. The plan has been rejected repeatedly by school board members.

Druid Hills students created a video documenting conditions at the school, including raw sewage bubbling up in an outdoor picnic area and electrical shock hazards. The video went viral and drew the attention of local and state officials, prompting a visit by the Georgia Department of Education’s facilities team.

Fall out from the video included the board suddenly firing former superintendent Cheryl Watson-Harris after publicly blaming her for conditions at the school. Since then, there have been revelations about internal conflict between Watson-Harris and the board around reorganizing DeKalb County School District’s central office.

Yet even after the public outcry, board members have continued to exclude the Druid Hills modernization project from its plans.

The state department of education produced a corrective action plan based on its inspection of Druid Hills HS and meetings with the school district. It includes a lengthy list of immediate repairs to Druid Hills HS, and requested modernization of both Druid Hills HS and Cross Keys HS. Other schools are not mentioned individually, but the plan includes “immediate and long-term recommendations to ensure that every DCSD facility meets a standard of safety and quality.”

Other requirements include cooperation with GADOE staff who are assigned to help the district implement the plan, including timely access to documents and records. The board is also required to state a commitment to modernizing Druid Hills HS in writing, “in a timely manner.”

The five-year facilities plan is the first step of an approval process that will allow state reimbursements for capital projects from the GADOE’s capital outlay project fund. Delays in approval will affect any new building projects started this year. However, the corrective action plan states that prompt compliance will mean that funds for repairs at Druid Hills HS will be available as soon as September of this year.