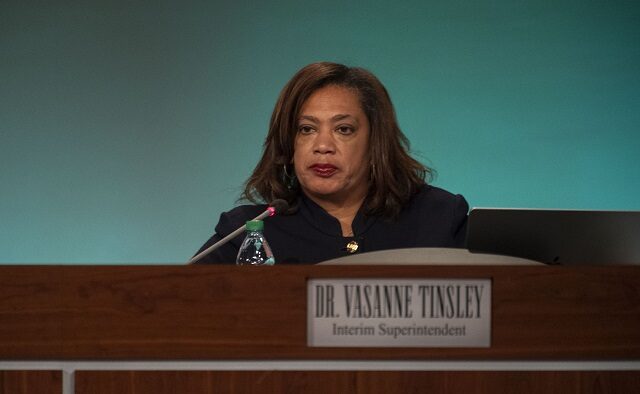 DeKalb County, GA — DeKalb County Schools spent $25,000 to scrub the name of the recently fired superintendent from this year’s diplomas.

The DeKalb School Board unexpectedly fired Cheryl Watson-Harris on April 26. The board named Vasanne Tinsley the interim superintendent.

DeKalb Schools spokesperson Donald Porter said, “It is the longstanding practice of the DeKalb County School District (DCSD) to award high school diplomas to all graduates with the current superintendent and board chair’s names and signatures affixed as they are responsible for certifying them. Therefore, a reprint was ordered to reflect the correct individuals. The production and printing costs for the diplomas distributed to this year’s 5,834 [DeKalb County School District] graduates are approximately $25,000.”

The news about the diplomas was first reported by a newspaper of record printed in Hall County.

Reporting by Decaturish has revealed that before Watson-Harris was fired, she informed the school board of a plan to reorganize the district’s central office.

Initially, the plan would’ve required people in senior positions at DeKalb County Schools’ central office to reapply for their jobs, but eventually, that plan was watered down due to “hesitance” from members of the DeKalb County School Board, Watson-Harris said. It’s not clear if that plan will ever be implemented.

It’s also not clear if that plan was a factor in the DeKalb School Board’s decision to fire Watson-Harris on April 26.

Investigative reporting by Decaturish also revealed something else happening behind the scenes. The Young Group, a private investigative firm hired by the district to look into allegations of sketchy promotions and questionable use of federal coronavirus relief money on employee bonuses, produced a report that exonerated Watson-Harris. That investigation began right around the time the Druid Hills High community started applying pressure to the school board for leaving their school’s modernization off the district’s list of projects. After the private investigator interviewed Watson-Harris on April 26, the DeKalb County Board of Education unexpectedly fired her that same day. Records obtained by Decaturish show the investigation apparently began on Feb. 17.

DeKalb County Schools officials still refuse to say who on the board ordered the investigation.

The DeKalb County School Board never approved hiring the Young Group in public meetings. Some school board members were unaware it was happening, Watson-Harris said.

“I can also assure you more information will be forthcoming,” Hill said, afterwards declining to confirm if an investigation was taking place. Hill spoke to the Dunwoody Homeowner’s Association on May 1. The Young Group’s report is dated May 3.

Hill on May 19 said she did not ask for the investigation, but declined further comment.

Board member Allyson Gevertz said she was unaware of the investigation until she heard about Hill’s remarks to the DHA.

Gevertz believes DeKalb School Board Chair Vickie Turner asked the school district’s attorney to hire someone to do the investigation. Turner has not returned numerous messages seeking comments for this article and other articles.

On May 17, the district provided Decaturish a copy of a $13,200 unpaid invoice issued on May 6. But the school district has refused to turn over communications between its general counsel and The Young Group, citing attorney-client privilege.

“There are no agreement/engagement letters,” said Wanda Ngote, who works in employee relations at DCSD. “All communications are subject to the attorney-client privilege and/or the attorney work-product privilege.”