DeKalb County, GA — Voters in DeKalb County are casting ballots on May 24 for various primary races. Voters experienced some technical difficulties, but had smooth experiences once they were resolved.

Due to a late opening, the McLendon precinct, located at New Beginning Full Gospel Baptist Church, 923 Valley Brook Road in Decatur, will remain open until 7:40 p.m. on May 24, according to a press release.

At Avondale Estates City Hall, the voting machines were down for a few hours, and voters were issued paper ballots. About 160 emergency paper ballots were cast, and about 64 had been cast on the machines as of 11:30 a.m. A poll worker mentioned at the time that the machines had been back up and running for about an hour when Decaturish reporters arrived at the polling location.

“I was hoping that using the power of my vote, I could take down the American government, but I think I just cast a ballot,” Avondale Estates resident Mick Roper said.

Roper was able to use the voting machine when he voted and said his experience went smoothly.

“I want to make sure who I vote for gets in, so I vote,” Seawright said. “They were having problems with one of the machines, but they got it up and running pretty fast.”

“I think that there’s just so many important issues that are on the ballot and I feel like there’s been so much work that’s been done leading up to this, and I don’t want that to be in vain,” Armstead Evans said. “I want to make sure that the people get in office that have committed to do the work so that they can make the changes that need to be made.” 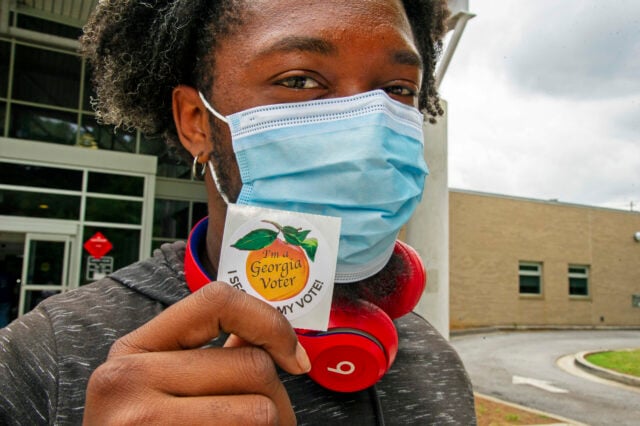 Cardelle Selvage voted in the Georgia primary election at the Tucker-Reid H. Cofer Library on Tuesday, May 24, 2022. Photo by Dean Hesse.

At Lakeside High School, the ballot scanner was rejecting ballots and poll workers were instructing voters to place their ballot in the backup drop box attached to the scanner, according to someone who voted at the high school.

Erik Burton, a spokesperson for the DeKalb Voter Registration and Elections office, confirmed voters had to use the emergency bins and said that DeKalb VRE was working to resolve the technical issue around 2:15 p.m.

As the morning went on, polling locations seemed to be running smoothly and steady lines of voters were streaming in to cast votes in Decatur.

At the Decatur Recreation Center, 136 votes had been logged into the machines as of about 10:12 a.m.

The recreation center is being used as one precinct this year. It is the Clairemont East precinct. The center had previously also housed the Glennwood precinct, but that one has been moved to Holy Trinity Parish, 515 E. Ponce de Leon Ave.

Decatur resident Emilee Terry said her experience voting at the Decatur Recreation Center was very streamlined, more so than she’s ever experienced.

“I like to vote, especially in primaries and local elections, where your vote almost carries more weight. There’s so much going on with the county right now and the state,” Terry said. “Of all the elections, we’ve put more attention to the down-ballot candidates, especially county commission [and] with all that’s happened with the DeKalb School Board.”

She added that this year, it was important to try to make sure voters understand who they’re putting in elected positions.

“I think it’s become very clear that top to bottom of the ballot, it’s important to know who you’re voting for and what they stand for,” Terry said.

Decatur resident Meagan Swingle used to bring her son with her when she would vote before he started going to school.

“I think it’s important to exercise our power. Our power in our cities, in our counties, in our state, in our government is in our vote and making our voices heard. The only way we can hold those in power accountable is by our actions, and one of our loudest actions is our vote,” Swingle said. “There are other ways to make your voice heard, but there’s nothing more powerful than our vote.”

Some voters in the Medlock Park neighborhood experienced some confusion some polling locations changed and signs were posted at the International Community School stating the polling location changed to the North Decatur Presbyterian Church, according to a Facebook post.

DeKalb VRE confirmed that the International Community School was being used as a polling location today for the Medlock precinct.

During the last election cycle, the North Decatur, Scott and Medlock precincts were all located in one polling location.

“Essentially, where we are seeing any confusion is around those polling locations that house two precincts,” Burton said. “The changes, mainly prompted by redistricting, required VRE to modify some locations – which led to one of the co-located precincts to shift to a new location. We will continue to urge voters to check their voting precincts ahead of each election.”

A couple of ladies who didn’t get their absentee ballots in time ended up voting in person at the church. Ande Craig said she had a good experience at the polling location.

“I want to see a lot of things change,” Craig said about her reason for voting in the primary.

Gail Stillwell added she has voted in almost every election since she was 18.

“It’s my civic duty. I think everybody should vote or don’t talk bad about what’s happening,” Stillwell said. Gail Stillwell cast her ballot for the Georgia primary election at North Decatur Presbyterian Church in greater Decatur on Tuesday, May 24, 2022. Photo by Dean Hesse. 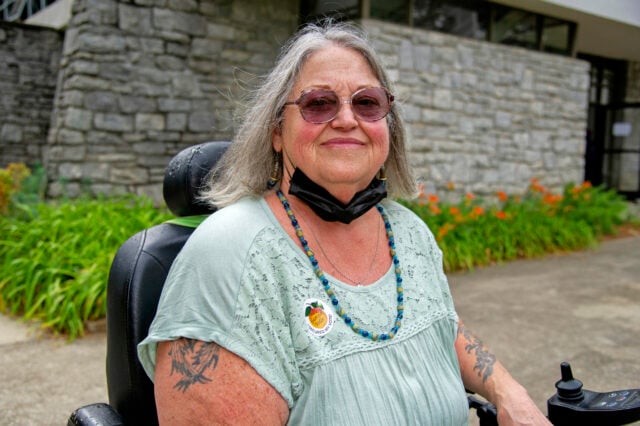 Ande Craig voted in the Georgia primary election at North Decatur Presbyterian Church in greater Decatur on Tuesday, May 24, 2022. Photo by Dean Hesse.

Ryne MacBride also had a smooth experience. Had to wait in line, but not for long.

“It’s important to try to add your voice to the democratic process, whatever that really amounts to anymore these days,” MacBride said. “There’s some sense of obligation or duty I feel, not so much to my country as much to the people that live in this country.”

Precincts in Clarkston were off to a slow start today. At Clarkston First Baptist Church, 65 ballots had been cast as of 12:47 p.m. and 73 votes were cast at the Clarkston Community Center as of 12:17 p.m.

Trenicia Holloway voted at the Baptist church today to make a change and said voting is something she makes sure she does. She was in and out in a few minutes and said, “everything was simple and easy.”

A steady stream of voters was entering the Reid H. Cofer Library in Tucker this afternoon. About 245 people voted at the library as of 1:30 p.m. Off-duty DeKalb police officers were also hired as security at the library during the voting hours.

The state of the government brought Tucker resident Mariana Viriato out to vote on Tuesday.

“I’m the kind of person that if I see something that I don’t like, I want to change and the only way to change it is to vote,” Viriato said.

Cardelle Selvage said he has been encouraged over the last couple of years to listen to what elected officials “have to say about my wellbeing, my finances, my economics, my livelihood here in Georgia.”

“Over the past years, I’ve paid attention to those who speak, and it motivates [me to] put an effort into bringing those people who I feel like I can trust into office,” Selvage said.

He has voted in person for about the last 10 years and prefers to vote on Election Day.

Gary Wells also wanted his voice to be heard, and said he cares about the future of Georgia. He has voted in almost every election he could.

“You can’t complain about the way things and don’t vote,” Wells said. “I don’t think you have a right to complain if you don’t get out and vote.” 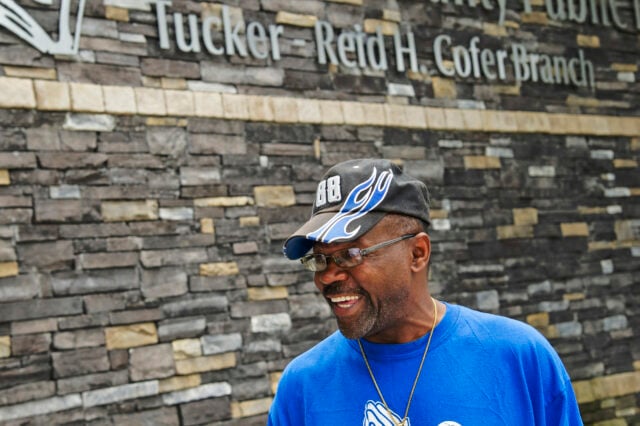 Gary Wells talks about voting in the Georgia primary election after casting his ballot at the Tucker-Reid H. Cofer Library on Tuesday, May 24, 2022. Photo by Dean Hesse.