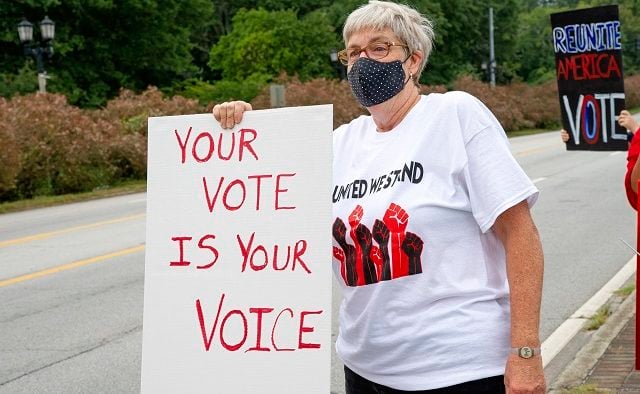 FILE PHOTO USED FOR ILLUSTRATION PURPOSES: Carol Calvert holds a sign during a ‘Get out the Vote’ rally hosted by the Avondale Alliance for Racial Justice in Avondale Estates on September 19, 2020. Photo by Dean Hesse.
Share

DeKalb County, GA — On the opening day of early voting in the Georgia primary race, 6,800 voters in DeKalb County are being warned that their ballots are incorrect.

Early voters in Avondale High, Northlake, Rehoboth, Glennwood and Winnona Park precincts will use specially designated equipment at the polls to correct the problem.

A statement issued by DeKalb County Voter Registration and Elections Department pointed to “a discrepancy between the precinct map approved by the General Assembly and their assigned County Commission district on the Secretary of State’s website. The department investigated immediately and discovered that approximately 6,800 voters were affected by this issue.”

DeKalb Elections is planning to void and reissue 99 absentee ballots. It is not known how many ballots were sent overseas or out of state. No additional action is required for voters, said DeKalb Elections.

The mistake was first noticed by Janel Green, a voter in the Rehoboth precinct in unincorporated DeKalb County. Green and her neighbors received incorrect information from My Voter Page and absentee ballots. She quickly realized her ballot was missing the race for DeKalb County Commissioner in District 2 to replace Jeff Rader.

Green said confusion is Georgia’s way of further disenfranchising voters. She considers herself a “super voter” who is tracking redistricting changes.

She spent most of the day on April 30 notifying elected officials, DeKalb Elections, Fair Fight, the Democratic Party and Fair Districts GA that her ballot was wrong.

In response, Green received a letter from DeKalb Elections stating they were working on the problem.

An email, received late May 1 from Elections Director Keisha L. Smith, states DeKalb Voter Registration and Elections is working diligently “to ensure that any voter who may have been impacted by this discrepancy.”

Smith’s email states that absentee ballots will be canceled and reissued this week with a letter of explanation. Voters who were affected by the redistricting error will receive an explanatory letter along with their corrected precinct card.

But a letter from DeKalb Elections Board Chair Dele Lowman Smith states that DeKalb has not received updated precinct cards from the Secretary of State. The department anticipates mailing the cards in time for Election Day.

Green said the Secretary of State’s office is contributing to voter confusion.

“I’ve been trying to see my ballot for weeks to ensure it was accurate, and that I had all the races on my ballot,” said Green. “It didn’t become visible until Saturday. That’s wholly unacceptable to make voter information available only two days before the election.”

“This discrepancy in precinct assignments was caused by a misalignment between the state legislative process and the Secretary of State’s redistricting timeline for county elections offices,” said Lowman Smith. “DeKalb VRE leadership responded urgently when they learned of this error and worked through the weekend to find a solution that will allow all affected voters to cast their ballots for the correct races in whatever manner works best for them: absentee-by-mail, advance in-person voting, or at their assigned precinct on Election Day.”

Twyla Hart served as interim Elections Director in 2021. She said DeKalb County was vocal about the tight deadline.

“Last year during the elections state conference, a great deal of the election officials in the state of Georgia requested that the state push back the primary in order to accomplish this, and they chose not to,” Hart said at the January DeKalb Elections meeting.

After a redistricting, the county is required to inform voters by mail. A precinct card is mailed to voters affected by the change.

In Georgia, it is not required to vote in the primary race to qualify to vote in the general election. So if a voter misses the chance to vote in May for DeKalb County Commissioner, they can still cast a ballot in November.

Some voters have complained that the pop-ups on My Voter Page are distracting and confusing. To view a sample ballot, voters must allow pop-ups on their browsers. Opening the site on a smartphone is trickier.

To ensure correct precinct and ballot information, voters should contact their elections office. In DeKalb County, the Elections Office can be reached at 404-298-4020.