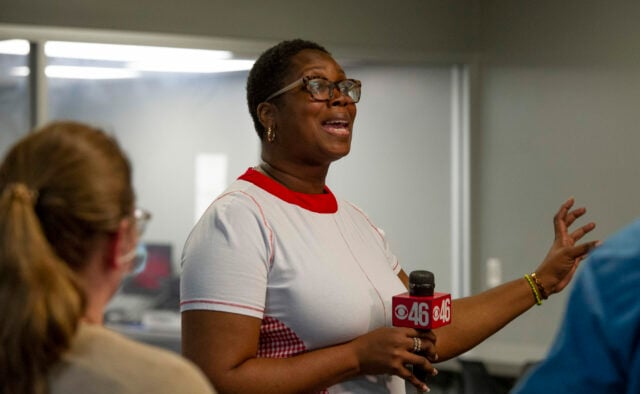 DeKalb Elections Board Chair Dele Lowman Smith comments before the start of the recount of DeKalb Commission District 2 ballots on Saturday, May 28, 2022. Photo by Dean Hesse.
Share

DeKalb County, GA — The DeKalb County Voter Registration and Elections office is in the process of recounting ballots from all 40 precincts in county commission District 2.

The ballots are being rescanned today, May 28, at the VRE office on Memorial Drive as candidates, county commissioners, elections staff, members of the public and members of the State Elections Board look on.

The process was set to begin at 9 a.m on Saturday. As of about noon, the recount had not officially started. The staff was scanning a sample of test ballots to test the machines throughout the day. The recount began around 4 p.m. as ballots were being rescanned. The recount is currently underway.

“There was a technical glitch that did not completely remove a candidate from the reporting system, so when the votes were output they were misaligned to the candidates,” DeKalb Elections Board Chair Dele Lowman Smith said. “One candidate appeared to receive no votes.”

DeKalb County Commissioner District 2 candidate Michelle Long Spears said that during the primary on May 24, some precincts were reporting she received zero votes – including her own precinct.

Elections staff reviewed several precincts and confirmed that Spears had received votes and staff investigated why this error occurred.

“We believe we’ve come to understand what the cause of that error is, but now we want to retabulate those ballots to be clear about who received how many votes,” Lowman Smith said.

Four candidates initially qualified for the District 2 seat. Marshall Orson, Lauren Alexander and Spears are still in the race.

Don Broussard dropped out of the race for DeKalb Commissioner District 2. That withdrawal caused a mistake in the programming of the precinct scanner and led to inaccurate vote counts for two candidates.

“It was trying to fit results for three people into four slots, so one person appeared to have received zero votes, and other people were attributed, in the report, votes that actually were not theirs so we have to align those votes to the proper candidates,” Lowman Smith said.

Broussard was not on the ballot for early voting. 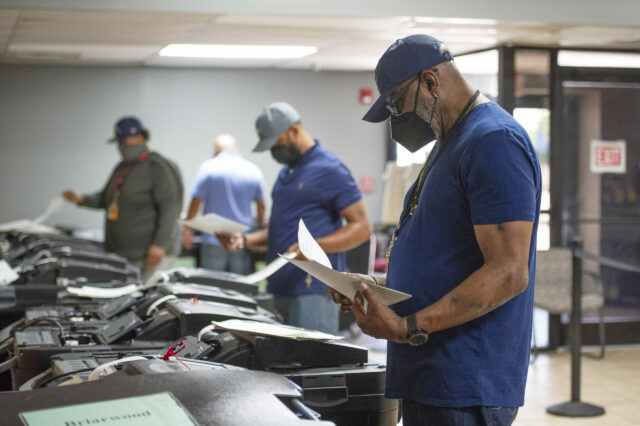 On Election Day, the ballots were tabulated and every vote that was cast was counted, she added.

“Simply, in the report it was not shown accurately,” Lowman Smith said. “This is the opportunity for us to, in a public audience, retabulate that, demonstrate how many votes were cast, and show which candidate received how many votes.”

She clarified that no candidate received zero votes. The recount will demonstrate how many votes each of the three candidates received.

“That was a coding error,” Lowman Smith said. “The ballot had to be changed in order to remove the candidate who withdrew, but there was also a separate place where it needed to corrected and that did not happen. They were not speaking to each other, and it made it look like one candidate received votes that were actually supposed to go to another candidate. There was a whole round-robin that happened. We’ve got to figure out who got those votes. There was not a single person who didn’t get votes.”

There was a variety of shared responsibilities in terms of the coding.

“Our understanding is that there needed to be an extra step taken to remove the candidate’s name from the report after we removed it from the ballot,” Lowman Smith said. “That is not a DeKalb County responsibility.”

The logistics and accuracy test was very unlikely to reveal this as an issue.

“It was just the report that was incorrect,” Lowman Smith said. “We tested the machines. On the machines they were correct, but in terms of the report, that’s where the error became clear.”