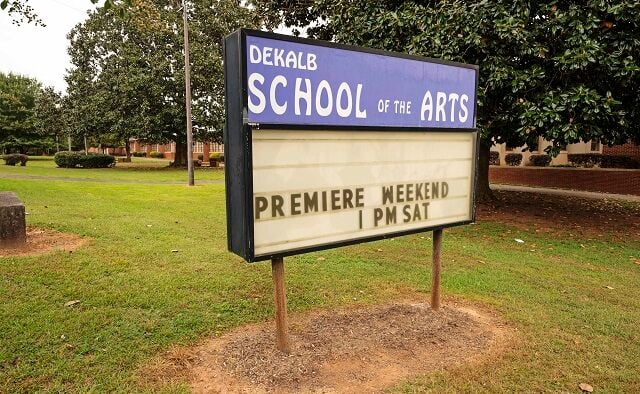 DeKalb School of the Arts. Photo by Dean Hesse.
Share

Avondale Estates, GA — There is a new video circulating depicting health and safety problems at a DeKalb County school.

Students attending DeKalb School of the Arts, a magnet school and one of the best in Georgia, on May 12 released a video illustrating problems at the school.

“Throughout this school year we have experienced many issues including lack of staff, pests, maintenance and many more,” one student says “Due to these issues that have been continuing throughout the school year, the students have been unable to function, learn and process in this environment.”

Heating and air conditioning are a persistent problem at the school.

“One specific issue that has been a problem throughout the whole school year is AC,” another student says. “Due to this, classrooms are either freezing cold or burning like a furnace, which causes students to be distracted, confused and dazed due to the constant temperature change from classroom to classroom. Another issue DSA has had for years is the pests. Animals such as roaches, spiders, ants, mice, birds and squirrels have been seen and encountered by students and staff of the school. Due to these pests, classes have been disrupted, and have made students and staff alike uncomfortable. It makes us feel like the school is unclean and unkept, especially when they appear in the cafeteria.”

DeKalb County School District spokesperson Donald Porter did not immediately respond to a message seeking comment. Porter has been mostly unreachable since Decaturish broke the news that the DeKalb County School Board fired Cheryl Watson-Harris during an investigation that ultimately cleared her. Decaturish also has learned that board members are attempting to schedule a meeting to discuss the numerous controversies unfolding in the district, but that board members have not yet agreed to do so.

On May 9, a video made by Lakeside High School students began circulating. That video is titled “Not Just Druid Hills,” a reference to a student-created video depicting Druid Hills High’s issues after the school board removed the building from a list of renovation projects.

Highlights of the video include water damage, locker rooms flooded with sewage from the toilets, a live rat discovered in the boys’ locker room, mold, dust, smells stained into the floor, sewage coming up from the drains in the girls’ locker room, an abundance of roaches, flooded classrooms with roaches crawling out of the cracks of the wall, a flooded electrical room, teachers having to administer their own chemicals to kill the roaches, rust leaking into the water of the school’s pool due to a busted boiler, and more.

Before learning about the latest video to depict unsafe conditions at a local school, Decaturish heard on May 9 that a sewage leak occurred at Lakeside. The district confirmed that, “One of the water fountains at Lakeside High School was not draining properly on Monday. A plumber was dispatched to investigate the issue and located a blockage in the line caused by sanitary wipes and feminine products. It was cleared, and all systems were restored to full service.”

Spokesperson Porter previously said the district is working to address issues at all schools, but it takes time and money. The school district has a $2 billion budget, and state Superintendent Richard Woods said in a letter about Druid Hills that the district has millions in unspent funds that could be used to fix schools.