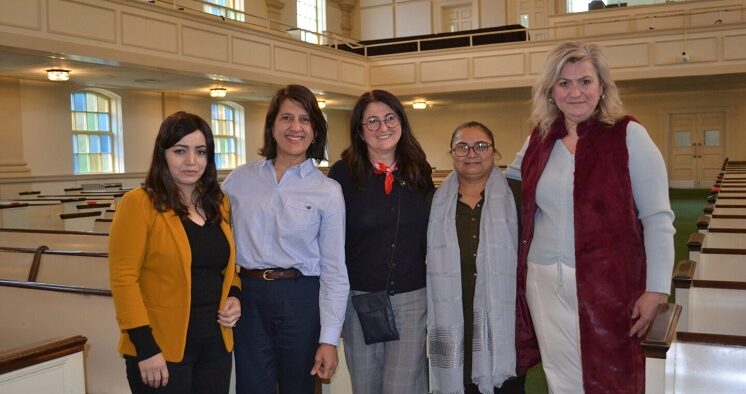 Decatur, GA — It’s late afternoon at First School, the preschool that belongs to First Baptist Church of Decatur. Irena Seferovic sits on the floor, a toy truck in her hands. She’s surrounded by a group of kids between two and five. Irena is originally from Bosnia, and in June she will be the school’s new director. That would have been impossible to imagine when she started working here 23 years ago, she says.

“I did not know any language,” she says. She only understood the word ‘Hi’ – “and the difference between my ‘son’ and the ‘sun’ in the sky, but nothing else.”

It was a very difficult start, she continues, but the school still gave her a job, and she was grateful. The school became a family, she says.

Irena Seferovic was the first refugee hired at First School. Today, 12 of the 31 teachers – more than a third – are former refugees. They’re all women. Most come from war-torn regions of the world, former Yugoslavia, Afghanistan, Pakistan and Sudan. They are Catholic, Christian-Orthodox or Muslim. Not a single one is Baptist.

“I think First Baptist traditionally has been on the front end of trying to live what we talk about,” says David Jordan, the senior pastor of First Baptist Church of Decatur – “which is acceptance, inclusivity, appreciation and respect, and what it means to love other people who are different than you.”

Jordan adds that to him, “it’s amazing full circle – where the first refugee who came to First School speaking no English is now the director of this program.”

For many of the teachers, the war in Ukraine, the images and sounds of violence, death, destruction and displacement bring back dark memories. As the women meet in the church’s sanctuary, they are fighting through tears, and decades-old trauma echoes from the walls.

“I’m very emotional,” says Majda Trozic as she recounts the events of one evening in May of 1992, when she barely escaped the bombing of her hometown in northwestern Bosnia. The next morning, “half of my house was gone,” she says.

Maliha Mohseni is from Kabul, Afghanistan, and has never seen her country in peace. “My country has always been at war,” she says, as long as she can remember. “We were never safe.”

Her odyssey started when she was 25 and married with three children. The family left Afghanistan and went to Pakistan. From there they went on to Iran, where they hired people to bring them from Iran to Azerbaijan. But Azerbaijan didn’t accept any refugees. “I was worried about my kids,” Maliha says. “I knew my life was in ruins with all this war, but I didn’t want this life for my children.”

In 2003, the family came to the United States, first to Louisiana, then to Georgia. “My home is right here where I live,” she says. “My kids are happy, and they have an opportunity for education.”

Maliha says she’s not religious, not anymore.  “I’m a Muslim. But for me, it doesn’t matter. It’s important to be human.”

Like many of the refugees-turned-teachers, Borjanka Dogic, a Bosnian Serb married to a Muslim, went on to live her own American Dream.

“We were able to purchase a house, after two or three years living in United States,” she says. She and her husband were working hard, she continues. At times each of them had two or three jobs. “And finally, when we paid off our house, it was like, okay, we can breathe.”

The two daughters have their own lives, and the house is big enough to welcome people from Ukraine, says Borjanka. She’s grateful to be a situation where she’s able to give back, she says. “24 years ago, I was the one who needed help. Now I can help, I can take in a family, I can help financially or any other way”.

Of the 100,000 Ukrainian refugees that President Joe Biden vowed to accept in the U.S., some may end up in Decatur and eventually, at First School. Irena Seferovic, the school’s incoming director, says she’s looking forward to any Ukrainian teacher who’d like to join the team.

“Absolutely,” she says. “We would take them in with open arms.”

Katja Ridderbusch is an Atlanta-based journalist who reports for news organizations in the U.S. and her native Germany. Her stories have appeared in Kaiser Health News, U.S. News & World Report, USA Today and several NPR affiliates.