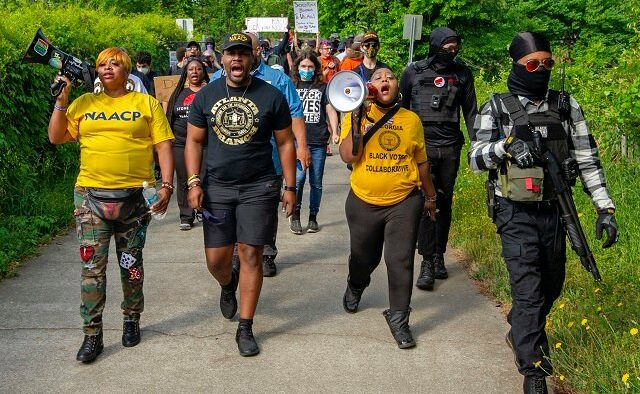 Stone Mountain, GA — I tried to maintain a sense of reserve as I observed the semi-annual display of Confederate confabulation at Stone Mountain this past weekend. Honestly. It’s not like I hadn’t seen this stuff before.

I’ve gone to most of the demonstrations and counter-demonstrations there over the last decade. The park’s public affairs director John Bankhead and I are friends at this point. I had a brush with fame a few years ago at one such event, when I encountered a Klansman wearing Fubu sneakers.

These spectacles have become routine for good reason. In 2020 when the park didn’t allow the demonstration, things instead spilled out into the village streets of Stone Mountain. I watched four or five street brawls go down around me, as white supremacists and counter-protesters faced off without a line of cops standing in their way. Given how many people were armed and the tensions of the moment, it is a minor miracle that no useful idiot started a gun fight before the National Guard marched in and everyone else marched out.

I’m antiracist. I pretend no neutrality in the arguments about how civil war history should be taught in school or what place Confederate heritage has in American discourse. The carving is a Klan memorial, which is why Klansmen keep showing up there, and why people who believe in racial equality have a duty to protest whenever they do.

But ritual displays have value. There’s utility in ceremonial demonstrations and sacramentally defiant counter-protests. Because fewer people get shot. That’s not an abstract consideration these days.

Perhaps there are parallels between Stone Mountain and the marches of Orange orders through the streets of Belfast. Marching season no longer ends with blood on Shankhill Road every year, only because of carefully negotiated agreements written in that blood.

So, white nationalists visit their shrine once a year or so, counter-demonstrators shout “This is why your grandkids don’t call you!” from the hilltop, everyone takes everyone else’s picture, and then they all go home.

Generally, I wouldn’t be interested in what someone like Martin O’Toole had to say Saturday. O’Toole, spokesman for the Georgia chapter of the Sons of Confederate Veterans is – as has been insufficiently noted in press reports – the leader of the openly racist Charles Martel Society, which argues in pseudo-scientific terms that Black people are genetically inferior.

The late, great Civil Rights leader C.T. Vivian had his eyes on O’Toole from the 70s, tracking O’Toole’s racist propagandizing with the National Anti-Klan Network, which became the Center for Democratic Renewal in 1985. O’Toole has been pushing racism since he was a UGA student in 1973. According to CDR records, O’Toole later helped publish newsletters for Gary “Gerhard” Lauck, an American Nazi who was jailed in Germany for violating anti-Nazi publishing laws there. Those newsletters went out as bulk mailings from the Avondale Estates post office under a permit tied to O’Toole’s phone number.

(I interviewed Lauck more than 20 years ago for a piece on international Internet borders, and it shocks me to know that he’s still alive, active and — marginally– relevant.)

O’Toole is a lifelong racist propagandist, and the arguments of racists made for other racists are beneath my contempt. Likening the plight of civil war losers to those of the Jews of Masada was especially rich, given O’Toole’s long history of antisemitism. For crying out loud: O’Toole worked with Holocaust denier David Irving to film a confrontation with the eminent Emory historian Deborah Lipstadt in a Decatur lecture hall in 1994. The guy goes way back.

But that doesn’t mean I can’t be shocked.

Mid-speech, O’Toole began to invoke Aleksandr Solzhenitsyn, the Nobel laureate novelist and famed Russian dissident who spent years of his life in a forced labor camp for criticizing Stalin.

While O’Toole was working on Nazi newsletters and harassing Jewish historians, I read the “Gulag Archipelago” and “One Day in the Life of Ivan Denisovich” as a high school student. Solzhenitsyn has long been viewed as an authentic voice against fascism and totalitarianism, writing about imprisonment at the hands of the state. His writing has been a powerful moral force driving my own work.

Apparently, the far right, starting with Jordan Peterson, has been trying to claim Solzhenitsyn because he was a critic of communism. To hear his name in this context enraged me. And I lost it.

“Keep Solzhenitsyn’s name out of your f—king mouth!” I shouted, unheard I think because most people on my side of the fence were simply shouting “shut the f—k up” over and over again at that point, and they were louder.

“In keeping silent about evil, in burying it so deep within us that no sign of it appears on the surface, we are implanting it, and it will rise up a thousand-fold in the future,” Solzhenitsyn wrote. “When we neither punish nor reproach evildoers, we are not simply protecting their trivial old age, we are thereby ripping the foundations of justice from beneath new generations.”