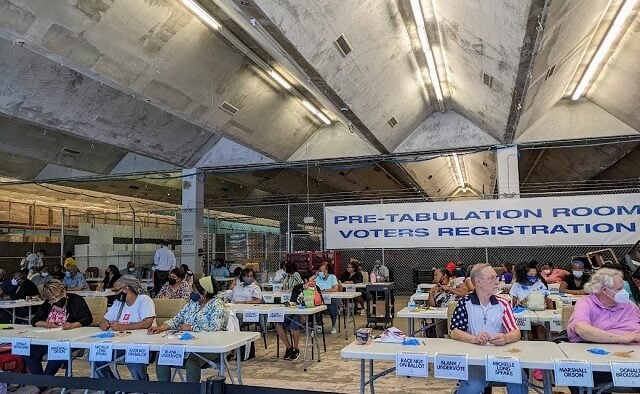 Monday, May 30, marked the second day of a hand count in the disputed District 2 County Commission race. Photo by Dan Whisenhunt
Share

The counters have finished counting the election day ballots and early voting ballots. They are now counting absentee ballots by mail. There’s a chance the county will release election results tonight. In addition to the noon meeting on May 31, the county Elections Board has scheduled a special called meeting at 4:30 p.m. to certify the results. Decaturish will publish a new story once today’s counting is concluded.

Here is our earlier story…

DeKalb County, GA — Monday, May 30, marked the start of another long, tedious day in the workshop of Democracy.

The DeKalb County Voter Registration and Elections Department oversaw the second day of hand count in the disputed District 2 County Commission race, which appeared on the May 24 primary ballot. As it currently stands, candidates Marshall Orson and Lauren Alexander are headed toward a runoff on June 21. But the hand count could change things. Michelle Long Spears, who finished third, said that during the primary, May 24, some precincts were reporting she received zero votes – including her own precinct.

Spears asked DeKalb County for a hand count of ballots, saying several precincts reported zero votes in her favor. Initially, the county planned to do a machine count, but decided to begin a hand count on Sunday after a problem with the testing of those machines. That hand count was suspended Sunday evening and resumed in a larger adjacent warehouse on May 30, Memorial Day.

This time, there were 20 teams on hand to count the ballots. There were seven teams there on Sunday. One thing that appears to be slowing things down is the counters have been tasked with batching the ballots, in addition to counting them.

Spears, who had been out of town at her daughter’s graduation as the drama unfolded, was on hand Monday to watch the counting. She told Decaturish her campaign has hired an attorney.

“We just want to make sure our campaign’s best interests are preserved,” she said.

Things have become tense, and litigious, as the count has dragged on. On Sunday, elections officials gave conflicting guidance on who could take photos of the count and what they could photograph. A federal court order provided to Decaturish from a case in 2021 that shows that a federal judge ruled in favor of the Coalition for Good Governance when they objected to this prohibition in Georgia Senate Bill 202, the state’s new voting law adopted in 2021.

However, DeKalb VRE said on Monday that photo-taking by observers is not allowed. Only the press would be allowed to take photos.

The Atlanta Journal Constitution’s attorneys objected to the prohibition on photo-taking, but it’s unclear if that’s why DeKalb VRE decided only the media could take photos.

Marilyn Marks, with the Coalition for Good Governance, attempted to take a photo before the ballots were out, and she was confronted by a DeKalb County elections official who summoned a police officer, according to Marks and a witness who saw the incident.

VRE spokesperson Erik Burton said as of now the DeKalb Elections Board intends to meet at noon on May 31, ostensibly to certify the election, though it’s not at all clear the counting in the District 2 race would be finished by then.

There are still many unanswered questions about the errors that led to the hand count. Here’s what is known so far.

Don Broussard dropped out of the race for DeKalb Commissioner District 2. That withdrawal caused a mistake in the programming of the precinct scanner and led to inaccurate vote counts for two candidates. The SOS office also said there the text of one Republican Party question was not properly appearing during early voting, and five precincts in DeKalb were redistricted into the county commission District 2 race, but those precincts had not been updated to reflect that change.

It is not clear if the county Voter Registration and Elections Department conducted logic and accuracy testing after each new database was created. VRE officials also could not immediately answer whether the creation of new databases after voting had started could potentially affect other races in the county. It’s also not clear how Broussard appearing on the ballots affected the outcome of the race. Broussard informed Decaturish on April 12 he was dropping out of the race.

As votes were being counted, some tables were showing results for Broussard as well.

Marks, with the Coalition for Good Governance, also showed up for the machine count on Sunday, May 29. She said databases aren’t supposed to change after an election starts.

“I’ve never in 15 years seen anybody change the database in the middle of an election,” she said.

Burton said he was hopeful the count would conclude today, May 30, given the number of people who showed up to assist. He did not know how the results of the hand count would be communicated to the public.

Spears said she was sure the county is acting in good faith.

“I have confidence DeKalb County is doing the very best they can right now to get to the bottom of this,” she said.

Spears also thanked the people who showed up to count the votes on a holiday.

“I am very grateful for all of the folks that are here counting and taking their holiday weekend to be present and ensure integrity in our voting process,” she said. “I’m sure this is the last thing they planned on.”