How to vote in the May 24 primary election

How to vote in the May 24 primary election 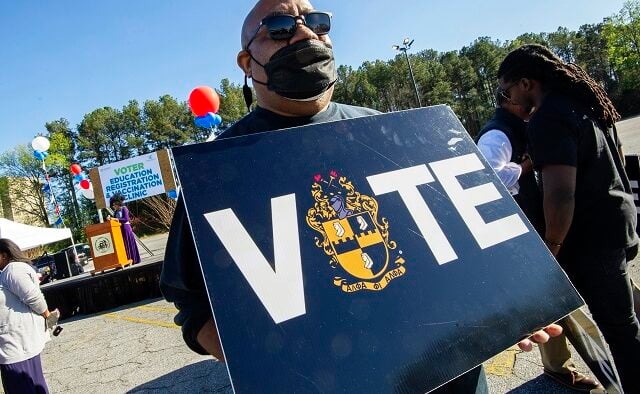 Atlanta, GA — May 20 is the last day of early voting in the primary, a race that has already doubled the number of voters over the 2018 primary election.

In DeKalb County, more than 33,000 votes were cast by May 18. Out of 13 early voting locations, the most popular place to vote was the DeKalb Elections office, followed by Tucker-Reid H. Cofer Library.

After May 20, there are two ways to vote: by absentee ballot and in person on May 24, Election Day.

According to the Senate Bill 202 voting law, drop boxes are only placed inside early voting locations and at the county’s election office. When early voting ends on May 20, the only accessible drop box will be at Memorial Drive.

Absentee ballots must be returned by 7 p.m. on May 24 to a drop box at DeKalb Voter Registration and Elections office, 4380 Memorial Drive, Decatur, GA 30032.

“As we quickly approach Election Day, it is imperative that voters take the time to return their absentee ballots in a timely fashion,” said DeKalb VRE Executive Director Keisha Smith. “So please don’t delay, make a plan today to have your vote counted.”

Election Day precincts are open on May 24 from 7 a.m. to 7 p.m. Voters can check their precinct here.

Provisional ballots have changed. If a voter tries to vote at a different precinct, their vote will not count unless it is after 5 p.m. on Election Day.

The bottom line is, voters should double check precinct changes before going to the polls.

Approximately 56,500 voters in DeKalb will be impacted by recent redistricting efforts that have changed their Election Day voting precincts, according to a press release. Impacted voters will receive an official correspondence from DeKalb VRE in the coming days.

The Secretary of State’s office is mailing new precinct cards, but DeKalb Elections warns some voters may not receive official communication ahead of the primary election on May 24.

“Because of changes dictated by SB202, voters cannot cast a provisional ballot if they show up to vote at the incorrect precinct on Election Day unless it’s after 5 p.m.,” said DeKalb Elections Board Chair Dele Lowman Smith. “Therefore, it is imperative that voters confirm their assigned precinct before they vote. We encourage them to check the My Voter Page or call our office at 404-298-4020.”

Melissa Manrow, President of the League of Women Voters of DeKalb County said SB 202 makes many changes to the voting process.

“SB 202 imposes strict time limits on when voters can request and return an absentee ballot and what kind of identification voters must provide,” Manrow said. “Georgia voters may still vote early in-person until Friday, May 20th and on May 24th at their assigned polling place.  A redistricting plan, approved for this year, may affect the boundaries of your district and which candidates run there.  The League of Women Voters of DeKalb County encourages all voters to visit mvp.sos.ga.gov or call the DeKalb Voter Registration & Elections Office at 404-298-4020 to verify their polling location, early voting locations, district boundaries, and sample ballots.”