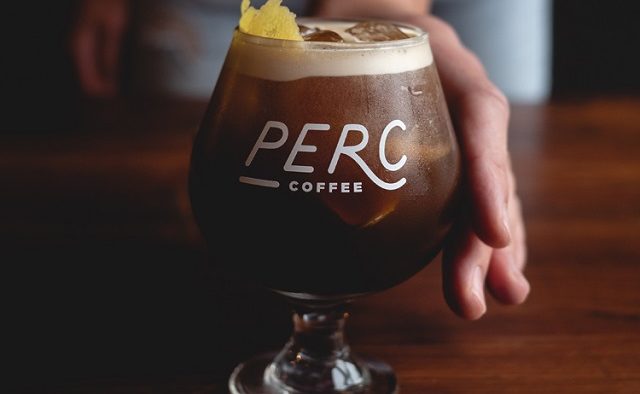 PERC’s East Lake coffee shop is located at 2380 Hosea L. Williams Drive NE and is open Monday through Sunday from 7 a.m. to 4 p.m.

Each competition featured 18 of the country’s best coffee professionals. Marvin Duncan, Addison Mathis and Geordie Marlow participated on behalf of PERC and impressed the judges, according to a press release.

Duncan, PERS’s quality control manager, was a finalist in the U.S. Brewer’s Cup Championship, a competition focused on drawing out and serving the flavors in coffee. Duncan chose an upcoming limited release coffee from Granja La Esperanza in Colombia that’s unique to only that farm. He roasted the coffee he competed with, and brewed it with an Origami brewer.

Mathis, PERC’s quality assurance manager, was a semi-finalist in the U.S. Barista Championship, which broadly spans brewing and serving espresso, cappuccinos, and a novel coffee-based drink. Their presentation centered on the shared experience of handing someone a cup that makes someone say “Whoa! I didn’t know coffee could taste like this!”

“Signature drinks are one of the ways that we are able to present and share good times and amazing coffee with everyone we meet,” PERC’s Retail Director Amber Foreman said. “These creations are a vessel to share awesome coffees and creative flavors with others. Addison’s competition drink brought out notes and enhanced the coffee in a whole new way than just drinking it on its own. We want our drinks to be exciting and different from what one can expect or get anywhere else. Whether you are new to coffee or not, our signature drinks create a fun and approachable way to enjoy our coffee that we are equally proud of.”

Duncan and Mathis competed with coffees PERC already had in-house.

“PERC’s approach to sourcing has always been to bring in the absolute tastiest coffees we can get our hands on,” PERC’s Operations Director Taylor Kimball said. “Coffees that wow us time and time again. For our seasonal offerings, we love to
highlight non-traditional processing methods, and coffees that display unique flavors, especially ones
that aren’t typically found at those origins.”

Geordie Marlow, a barista at PERC’s East Lake location, competed at the U.S. Latte Art Championship, where competitors must design unique large and small format latte art designs and replicate them on stage. Just by pouring steamed milk from a pitcher into a cup of espresso, Marlow created an image of Batman in his large latte and a penguin in his smaller cup.

“Latte art is one of the many important pieces that helps to create excitement and a ‘wow’ moment as soon as a guest sees their drink,” Foreman said. “It’s not a secret in the world of dining that people eat with their eyes first; we think the same is true for our drinks. Latte art shows the intentionality to craft and care for each person receiving a drink. We want to present something that we are proud of every single time. Additionally, latte art can be an expression of the person making each cup.”

Philip Brown founded PERC twelve years ago, but there had never been a PERC competitor in the U.S. Coffee Championships.

“In the last few years, we’ve made a big push to grow the company,” Brown said. “We also challenged ourselves to get better at sourcing, roasting and serving outstanding coffee. We found some incredible humans to spearhead those efforts. We added dedicated spaces to facilitate training in both Savannah and Atlanta. In addition, we have our leaders within the company and a community of coffee people worldwide to help our folks achieve. We’re determined to continue growing and improving by adding amazing folks to the crew and investing in our collective future.”