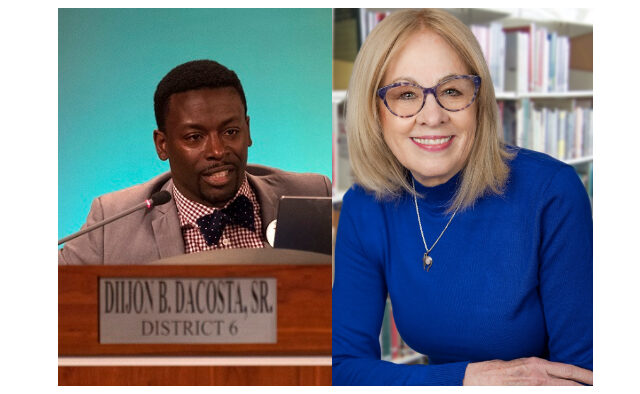 District 6 School Board member Diijon DaCosta won 49.16% of the vote, not enough to clear the 50% threshold to avoid a runoff. Republican-backed Janet Hughes came in second with 29.5% of the vote. Another challenger, Venola Mason, won 21.32% of the vote.

A message left with DaCosta was not immediately returned.

Hughes, 70, is a licensed therapist who has identified as a Democrat in the past but said that she has left the party.

“I identify with a group here that has supported me,” Hughes said. “They’re small business people. They’re people of faith. They’re more conservative in terms of the wise use of resources. I had identified as being a Democrat because I had to leave the Democratic Party because of the way it was run. At this point, I have joined the Republican Party because I feel that the overall aim here is going to be much better for the citizens of our county.”

“I have people who are Democrats who are really supportive of me because we have the same idea about what needs to be done for the schools,” Hughes said. “It really is a nonpartisan thing. … It’s a label we have, Republican or Democrat, and we don’t want to identify ourselves with a label. We want to identify ourselves as citizens who love DeKalb County. We love our kids. That’s what we can identify with, being DeKalb County residents.”

DaCosta’s political support in the county cratered when he joined arms with three other board members on two controversial decisions: leaving Druid Hills High’s modernization project off a list of projects seeking reimbursement of state funds and voting to fire former superintendent Cheryl Watson-Harris. DaCosta has aligned himself with Board Chair Vickie Turner and board members Anna Hill and Dr. Joyce Morley. As a result of his votes, he lost the endorsements of county commissioners Mereda Davis Johnson, Steve Bradshaw and Ted Terry.

Members of the all-Democratic legislative delegation were watching the race closely to see if a DaCosta loss would bring some measure of accountability to the board that has made controversial decisions. But instead, the delegation and the commissioners who withdrew their endorsements of DaCosta – all Democrats – must weigh whether to back him, support Hughes or stay out of the race altogether.

DaCosta spoke to Decaturish early in his campaign, but has not responded to numerous questions raised by our investigative reporting about the firing of Watson-Harris. Before he voted to fire Watson-Harris, DaCosta had praised her leadership in an election Q&A with Decaturish.com. DaCosta is tardy on several years worth of personal financial disclosure reports, forms that list the source of an elected official’s sources of income, their partner’s income, any properties they own, investments they have, and any “fiduciary position” in a business entity, including nonprofits.

DaCosta, who took office in 2018, only filed forms in 2017 when he was a candidate and in 2022 following inquiries from Decaturish. DaCosta’s disclosure form filed on May 5 does not list a nonprofit entity he created in 2014: the DeKalb Kids Project. Tiijon DaCosta, the brother of school board member Diijon DaCosta, who currently works as a transportation specialist in the school district, is CFO of the nonprofit, according to corporate records.

During the general election, attempts to reach Hughes were unsuccessful. Her campaign website describes her as a “proud mother and a grandmother of two little girls,” who has lived in DeKalb County for more than 40 years and has “sadly watched our schools steadily decline over the last three decades.”

Here is her 5 Point Plan listed on her website. 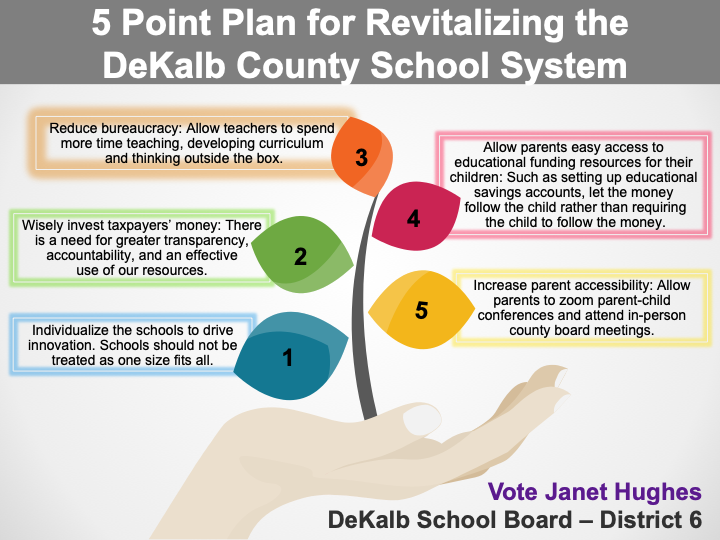 While she’s backed by the Republican Party, Hughes’ website is devoid of any mention of party affiliation and her “About” page includes the following quote from Eleanor Roosevelt:

“Education is the cornerstone of liberty.”

Hughes attributes her success in the election to her boots-on-the-ground campaign style.

“I would just meet the people and talk with them directly, you know,” Hughes said. “I’m a grassroots person, I would hike up Stone Mountain, and I’d see people, and I’d hand them my information, and I’d have my dialogue with them about what was going on, their experiences in the schools. I wanted them to meet me, to see me. I would knock on doors. If I saw somebody on the street, I’d walk with them and talk with them.”

Hughes said she has questions about what the term “modernization” means in reference to Druid Hills High School, but said every child deserves a safe and healthy learning environment.

“We need to make it safe,” Hughes said. “We need to do that with every school. If there’s mold in there, we need to get the mold out. Do we need to get a plumber? I’m a pragmatic person. We need to know what is a priority here? That environment the kids are in needs to be safe, No. 1. No. 2, we have to make sure they’re being educated, so they know how to read and write. Those should be the priorities. I don’t think that’s been the priority for the board.”

Hughes said she didn’t have enough information to decide whether firing Watson-Harris was justified.

“To me, it is a systemic because I believe when you go through six or seven superintendents, there’s a problem here,” Hughes said. “So, certainly, the way they did it was not professional, but I’d have to really get all the information. I need to know was this done with the best intentions or was it done for other reasons?”

Hughes previously responded to a Q&A from a newspaper of record printed in Hall County. She was asked about her opinion on “divisive concepts” in the classroom that have been the focus of Republicans around the country, and told the paper that teachers should refrain from “imposing” their opinions on students.

“We have such a diverse community — culturally, religiously, racially, all that. It’s so diverse, we have to be careful about putting our own personal beliefs because that could be contrary to a child’s religious background,” Hughes told Decaturish. “Critical race theory could compromise that and undermine that, and also cause a child more confusion. I think we need to be pure in our approach to teaching.”

Decaturish asked Hughes whether she’d seek to ban “controversial” books currently in school libraries. Hughes said she wouldn’t initiate that, but she would listen to concerns of individual school communities. For example, what if a group of parents wanted to ban a book with LGBTQ themes that another group of parents in the same school wanted to keep? Hughes said it would depend on the sentiment of that school’s community.

“Let’s say it’s a conservatively religious high school,” Hughes said. “Maybe it’s a school where people are of the Muslim faith. They’re not going to want these kinds of things, maybe a lot of LGBTQ or sexually explicit kinds of things. It’s very contrary to their belief system, and I think we have to make a decision based on what that particular school might decide.”

Hughes said it’s important to her that parents feel like they are heard.

“There’s going to be some compromises,” she said.

Hughes said around the country, people have not been paying attention to public schools and the schools have suffered, including in DeKalb County.

“I’m so glad I have my background as a therapist,” Hughes said. “I think it’s a sick system that needs therapy.”