‘Solitary to Solitude: Addis to Atlanta’ exhibit on display in Kirkwood through May 28

‘Solitary to Solitude: Addis to Atlanta’ exhibit on display in Kirkwood through May 28 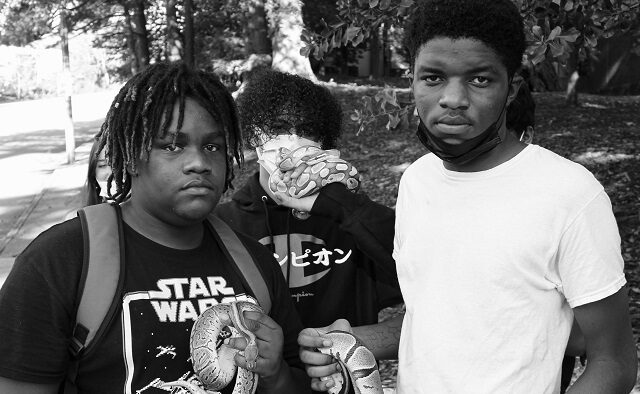 "Snake Boys" (Three Boys with Snakes) (Image shot outside Piedmont Park 2021 "I'm fascinated by young Black guys in Atlanta and their boas. It's a new phenomenon for me. I've never seen so many guys with snakes until I moved to Atlanta." Copyright: Roger Fountain 2021
Share

Atlanta, GA — Roger Fountain has had an affinity for photography since he was a little kid. Through childhood, college, travels, life abroad, and career in Los Angeles, “a part of all of that was really being able to see in a different way.”

John Simmons, artist and member of the American Society of Cinematographers (ASC), spoke to Fountain’s work as a friend of 25-plus years.

“I have admired Roger’s photography from the first time I saw it,” Simmons said. “It is a treasure that speaks to the fabric of humanity as seen through a sincere eye. It has meaning, and for me, that’s important.”

Fountain made the cross-country move from California to Georgia with his wife in early 2020 for her job –or, as he put it, “with the pandemic right on my heels.” Now, he’s building up a career as a freelance writer and photographer in Atlanta.

“I got to Atlanta, and the pandemic hit,” Fountain said. “But it was hitting behind me the whole time as I was driving here.” 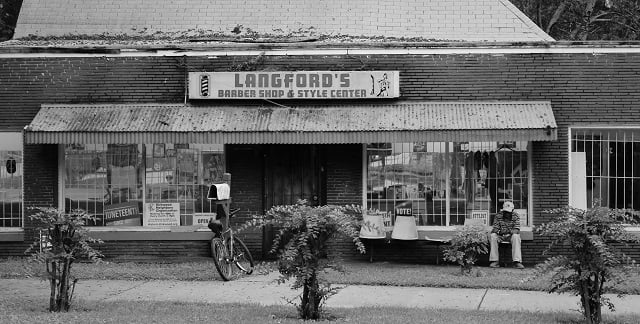 “Barbershop” (Man sitting in front of historic Black-owned Langford’s barbershop)
Image shot in Kirkwood 2020. “The shop was remodeled, so it doesn’t look like this anymore. So, I guess that makes it historic. But, every time I’d pass the shop I’d see this guy hanging out in front, and luckily I was able to squeeze off a good shot.” Copyright: Roger Fountain, 2020

So, Fountain began to photograph his new environment in Atlanta. And after making images amidst COVID-19, he saw a common thread between some of his work.

Open May 7 through May 28, Fountain has a solo exhibition on display at Empire Arts Gallery in Kirkwood called, “Solitary to Solitude: Addis to Atlanta.” It’s a composition of 11 images, taken before and during the pandemic, showing a juxtaposition between being solitary and the solitude that COVID-19 forced on people everywhere.

“I started thinking about how we live in our own heads. And it’s kind of a right of ours, to be able to live…to think in our heads. It’s a human thing to do,” Fountain said. “Then I thought, well…now we’re being forced to be in solitude.”

Empire Arts Gallery is a female-owned and operated tattoo studio, boutique, and fine arts gallery in Kirkwood. Brandi Smart and Malia Rifkin opened the gallery just under two years ago with a vision to be independent tattoo artists and fine art vendors.

It grew to something bigger, though. They quickly realized that they could help other artists get their names and work out to the community.

“We’re able to showcase local artists to a neighborhood that has the means to support local art via direct purchase, so that’s awesome,” Smart said. “I have to keep reminding myself that we have this place, and we’re doing what we’re doing.”

Smart has curated several solo exhibitions for artists over the past year and a half. She said that a lot of the work has focused on dealing with the pandemic.

“When everything shut down, everybody got a moment to be like, ‘Okay, I really need to think things through, right?’” Smart said. “Well, [Fountain] was doing that during this time that he was taking photos in Ethiopia, and then he ends up here. And at the time of a pandemic, he’s still dealing with that.

“The solitude part is from his view of what it’s been like for him. So, I’ve been really enjoying the humanity of people’s view on something that we’ve really never had to deal with, as globally… Everybody is affected by it. And it really did affect everyone’s art, so it’s been interesting to watch, and I’ve enjoyed seeing the different views that artists have had,” Smart said.

When asked why he’s always gravitated toward photography, Fountain spoke about the way that art affects the world.

“Photography has political leanings. Art is political. I’m not talking about a lot of things that have gone on in the country right now. I’m talking about…a personal view for people to look at, for people to try and understand,” he said. “It ignites their creativity or thoughts. So, that’s important to me, and I think it’s important to everyone, especially during these times that are sort of turbulent. I think that art is something that we can all look at without being pummeled by, ‘You did this. You did that. This isn’t right. This is right.’ But in the same breath, it’s important to have those discussions, and art is a catalyst for a lot of those discussions. For me as an artist and Black man, Atlanta was not my first choice for a new destination to settle in. I had no interest in moving here. I’d told my wife I didn’t want to go anyplace where looking at a tree could easily conjure the image of a Black man lynched. But, here I am. One of the many Black people returning to the south to reclaim our heritage through fresh eyes. It’s funny how life has a way of guiding you to places for reasons that can’t be explained.” 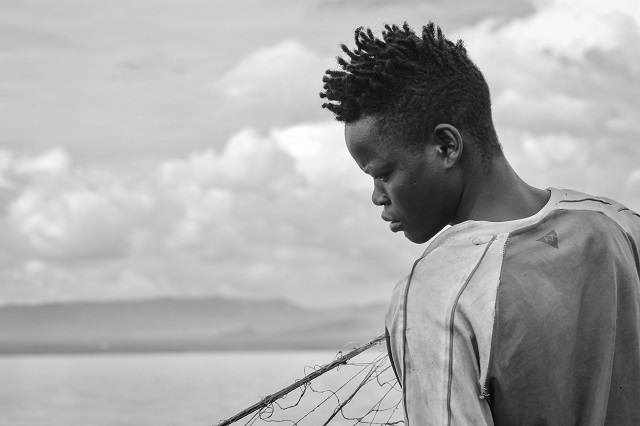 “Fisherman” (Man fishing on Lake Chamo, Ethiopia) “I was crossing a crocodile-infested lake to get to Nechisar National Park in Arba Minch, Ethiopia. The only way to get there was to cross the lake. And the only other people on the lake was this fisherman and his friend. The guy was so beautiful, I had to take the shot.” Image shot on Lake Chamo 2017 Copyright: Roger Fountain 2017