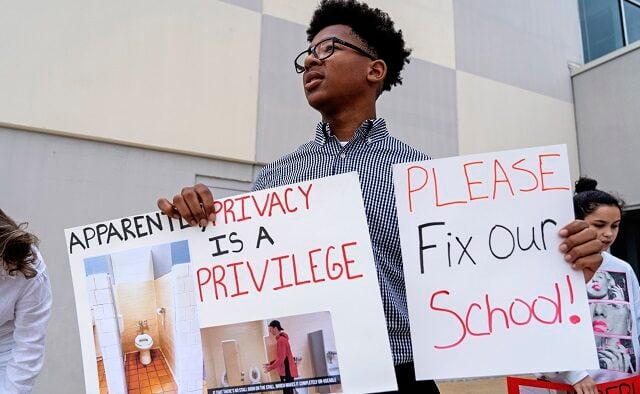 By Dan Whisenhunt and Sara Amis

DeKalb County, GA — The DeKalb County Board of Education at their May 9 meeting once again excluded Druid Hills High from the district’s repair plans.

The board adopted a local facilities plan at that meeting, but did not include Druid Hills High. The state Department of Education on May 12 ordered the DeKalb County School Board to add the high school back to the plan or risk being cut off from state facilities funds. The directive came as part of a corrective action plan for issues at the high school that were brought to light by students in a video that attracted widespread media attention.

“Failure to develop or amend the Local Facility Plan to address the issues laid out in this corrective action plan (including modernization of Druid Hills High facilities) could impede state approval,” the GA DOE wrote, underlining the part about Druid Hills High.

The corrective action plan also says, “The district must also commit to the modernization and expansion of Cross Keys High School.”

The school board’s resistance to modernizing Druid Hills High – driven by board Chair Vickie Turner and members Diijon DaCosta, Anna Hill and Dr. Joyce Morley – has led to an escalating controversy that has engulfed the school system.

The school board in February removed Druid Hills modernization from a list of projects. Following that, students at the high school produced the infamous video. That got the attention of the Georgia Department of Education, and resulted in a visit by the GA DOE’s facilities team. The school board in April again declined to reconsider the modernization project, opting instead for a plan that board members claimed would address repairs district-wide. Following that meeting, state Superintendent Richard Woods sent a scathing letter about conditions at the school, saying recent repairs were mostly cosmetic. The school board responded the next day by putting most of the blame on then-Superintendent Cheryl Watson-Harris. Later that day, the school board fired her.

The GA DOE’s corrective action plan demands that the Druid Hills High modernization project be added back to the local facilities plan by June 1. The next board meeting isn’t scheduled until June 6, meaning a special meeting would need to be called before June 1. Decaturish has learned that board members are attempting to schedule a meeting to discuss the numerous controversies unfolding in the district, but that board members have not yet agreed to do so. The district has mostly gone silent since Decaturish broke the story about the report that exonerated Watson-Harris. Emails to the district spokesperson Donald Porter and the school board have gone unanswered.

The corrective action plan notes numerous maintenance issues at the school remain unaddressed, including some previously identified via work orders that predate the GA DOE’s visit to Druid Hills High.

“The timely completion of work orders is crucial to the effectiveness of the facilities process,” the corrective action plan says.

Another requirement is aimed directly at the DeKalb Board of Education: