Decatur, GA —  Decatur law firm Williams Teusink has been issued a temporary certificate of occupancy agreement from the city of Decatur for their renovation of the former Decatur First United Methodist Church chapel and school building. For the most part, the construction is finished, besides some finishing touches.

The firm is working through the last inspections of the elevator, and additional landscape and tree site work.

“When this opportunity came, we said, ‘let’s try to figure it out,’ because it makes sense. We’ve been in downtown Decatur for 11 years,” Williams said. “The building’s fantastic. You look at it, and it’s a really cool reuse of both of these structures to take them into their next generation without changing footprints, other than the elevator, and really making them better, and continuing to be good stewards of the building.”

The law firm is currently located at the High House, across the street from the chapel on Sycamore Street, for about nine years, but they have outgrown the space. Williams Teusink plans to lease out the High House once the firm moves.

Williams and Eric Teusink closed on their purchase of the 1899 chapel and Sunday School building of Decatur First UMC on Dec. 31, 2020. The purchase price was $3.2 million.

“The church has had a church there since the inception of the county,” Williams said. “It started with a log cabin, then a wood structure and then the stone chapel. The school building was built in the 40s, and then they built the place across the street in the 60s. That became their main big campus.”

The chapel became accessory to the church and is used for weddings, funerals and special events. Recently, the school building was used as a preschool.

The partners are working with Metro Green to renovate the school building into office space for their firm, and will lease the remaining space to other tenants

The stone chapel will be used as a community and event space, as well as a small concert venue. An agreement between Williams and Teusink and the church allows the church to continue to use the chapel for weddings and small religious services, Decaturish previously reported.

“It’s been a very collaborative friendship and partnership with them,” Williams said. “They’ve used parking spaces at the High House for Holy Week even before all of this. We’ll continue to do that. We’re working with them on hopefully some parking in their lot back there.”

Williams Teusink plans to partner with an event company to operate and manage the old chapel as an event space.

In the chapel, the pews have been removed, the floor were restored, a bathroom was added and a new sprinkler system was installed. The stained-glass was repaired, refinished and protected. The screen in the chapel is down now, so it has audiovisual capabilities.

Williams Teusink and the developers tried to find a way to keep the pews. An idea early on was that the pews would be put back but wouldn’t be anchored to the floor, allowing them to be moved around the space.

“I loved it. I thought it was really cool. It looked like Ryman Auditorium,” Williams said. “Once we figured out how good of condition the floors were in, there was not a good way. The option was either pews or no pews.”

He added that there was not a way to reconfigure the pews that wouldn’t mess up the floors or risk the structure of the pews. A few pews will be placed along the sides of the chapel and the rest will go to Decatur First UMC. 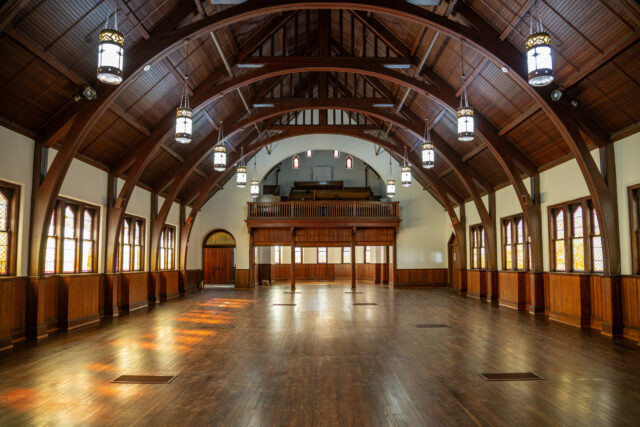 The former Decatur First UMC chapel will be used as a community and event space. Photo by Williams Teusink/Metro Green Development.

In between the buildings, Metro Green has built a ramp and stairs. Trees have been planted and sod down was put down in the small courtyard space.

The door at the end of the ramp leads to what was the second floor of the classroom building. This is the main floor of the office building. Inside the door, the developers have kept the top half of the old wooden entryway door to adorn the wall in the new entryway. The bottom half of the door can be seen on the first floor.

The first level of the building is being white boxed, which is basically the shell of an office. The developers haven’t moved the walls around on the first floor, allowing future tenants to configure the space as they need. More bathrooms were also added on the first floor.

Williams Teusink plans to lease out the first floor.

The developers have also repaired and replaced some windows, repaired the roof, improved the bathrooms in the building, added a new HVAC system, and have renovated the classrooms. They additionally installed an elevator, which is in its final stages of inspection.

On the third floor, Metro Green salvaged the historic doors, lights and some original trim around the doors. Some areas have been transformed into a reception area, lobby, conference rooms, a break room and offices.

Throughout the building, the developers and Williams Teusink reused as many of the classroom doors as they could. 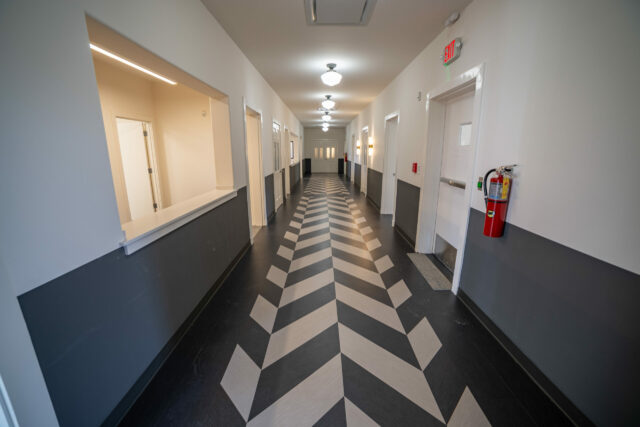 The classrooms in Decatur First UMC’s former school building have been converted to offices for law firm Williams Teusink and other future tenants. Photo by Williams Teusink/Metro Green Development.

Tree removal at the High House

At the High House, three trees were recently removed from the property and one tree was pruned.

“We regret having to take down any tree. We have worked to save three pecan trees since we purchased the property with a tree prescription plan administered by our arborist,” Williams said. “Unfortunately, we could not overcome the massive over pruning done by previous owners and the resulting natural lifespan.”

“The two large leaning trees had open rotted cavities in the mid and upper trunks,” Evanovich said. “The trees had been pruned numerous times over the years following storm damage and the trees were in a severe cycle of decline with extremely reduced unbalanced crowns. Due to the high risk and likelihood of failure with targets ( people in the parking lot and apartments) the owner filed for a removal permit.”

A dead, diseased, or hazardous tree is a dead tree, untreatably diseased or infested. These trees have a moderate or higher risk of failure, or have a high to extreme risk of failure that cannot be mitigated to an acceptable level, she added.

“The 5” evergreen growing right next to one of the trees was allowed because it is not a protected tree size and could not be saved,” Evanovich said. “The Oak at the street is being pruned away from the power line only. A commercial tree removal permit was filed for the DDH trees, and a tree planting plan will be implemented this Fall during the tree planting season.”

“We delayed removal until it was no longer responsible to do so,” Williams said. “We value our stewardship of this property and the community with our neighbors. Sometimes responsible stewardship requires tree removal.”