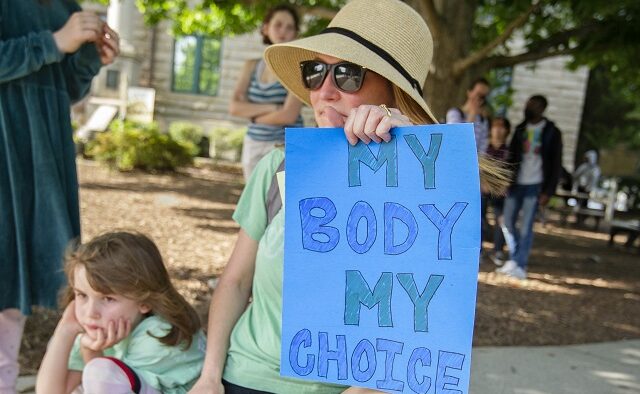 Susy McKay holds a protest sign with her daughter Lucy during a demonstration at the downtown Decatur Square on Tuesday May 3, 2022 following the leak of a Supreme Court draft opinion overturning Roe v. Wade. Photo by Dean Hesse.
Share

Decatur, GA — The U.S. Supreme Court on June 24 officially overturned Roe v. Wade in a 5-4 decision that will likely upend national politics ahead of the November midterm elections.

Decaturish is keeping tabs on how the ruling is playing out locally. Immediately after the decision, DeKalb County District Attorney Sherry Boston announced she would not prosecute women who have an abortion, which could soon be illegal under Georgia law.

Here is her full announcement:

Today is a dark day. Though a leaked draft opinion set expectations for the eventuality that Roe v. Wade would be overturned, the reality of this moment still stings. 50 years of well-settled precedent has been shattered and, in its wake, remain fear and uncertainty. Across our country, reproductive rights and private healthcare matters are under attack and vulnerable to criminal inspection and prosecution.

Georgia is no exception. In 2019, HB 481, better known as the “Heartbeat Bill” was signed into law. The legislation bans abortion as soon as heartbeat activity is detectable – typically around six weeks into a pregnancy – before many women even know they are pregnant. Set to take effect in 2020, the anti-abortion law has been stalled by the 11th Circuit Court of Appeals which ruled it would await U.S. Supreme Court action before making a final determination regarding the bill’s constitutionality.

So, now what? If, or likely now, when Georgia’s “Heartbeat” law advances, what are the repercussions for women, their providers, and those who assist them with obtaining abortions beyond the six-week timeframe? What is the penalty for “defiance”? The penalty for seeking essential healthcare? Under this measure, a District Attorney could bring criminal charges and pursue imprisonment against those involved in seeking, performing, and/or assisting with an abortion.

It is my contention that law enforcement and prosecutors should not be thrust into this health space, regardless of the legislation on the books. As such, as the elected District Attorney with charging discretion for the Stone Mountain Judicial Circuit (DeKalb County), I am vowing not to prosecute individuals pursuant to HB 481. I believe it is a woman’s right to make decisions regarding her own body and medical care, including, but not limited to, obtaining an abortion.

To be clear, I’m not “picking and choosing” which laws I will and will not enforce based simply upon my own beliefs. I reject the notion that we, as elected prosecutors, should blindly enforce or “rubber-stamp” laws without introspection and question regarding the greater good of the community. As a matter of context, adultery remains a crime in Georgia, but I can’t imagine any of my DA colleagues in the state presenting that charge for indictment. For the record, nor will I.

It is my duty to proceed with prosecutions that are in the best interest of the community for which I was elected to serve, and to lead with an eye toward public safety. Criminalizing abortion undermines public safety and public trust. Further, it threatens the lives, health, and well-being of marginalized individuals whose access to safe abortion procedures will be restricted greater than others. We are creating dangerous “have” and “have not” scenarios that operate contrary to the bedrock of public safety. It is my job as DA to make sure that the laws I prosecute are enforced in a fair and equitable manner without inflicting unnecessary public harm.

To that end, I worry today for those victims and survivors who most need access to safe healthcare options or criminal justice resources in the wake of an attack or personal trauma. My greatest fear is that they will now retreat into the shadows, or back-alleys, if you will, amid the darkness that now hovers over our country. But where there is fear, I pray there is also hope and a glimmer of light, centered in my resolve to stand firm in my prosecutorial authority and discretion not to criminalize abortion services. May that thought offer a measure of comfort to women and providers in my community on this dark day.

“I am sickened by this decision that wrongly and immorally tells women that their bodies are not their own.

“The choice to have an abortion is one of the hardest decisions of many women’s lives. That choice is informed by a wide variety of factors, and government should not have a role in denying that choice.

“As a straight man, I have never been told by the government when, whether or how to start and raise my family. Make no mistake: this ruling will most grotesquely impact women of color and those who do not have the resources to travel to find safe and high-quality health care outside their communities where reproductive services are made illegal.

“I oppose this decision.”