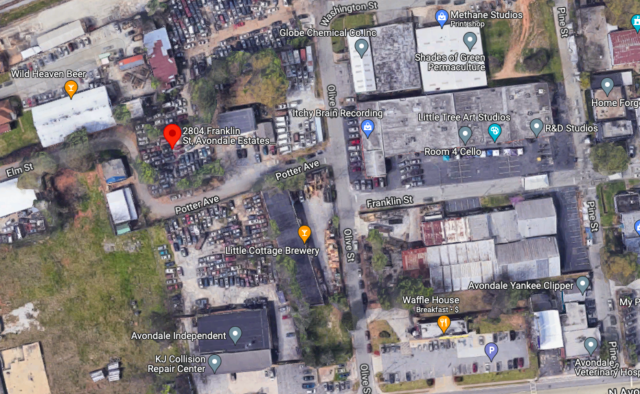 The Avondale Estates City Commission voted on June 8 to declare the city’s intent to use eminent domain to acquire property at 154 Olive Street, and 2804 and 2816 Franklin Street. Photo courtesy of Google Maps.
Share

Avondale Estates, GA — The Avondale Estates City Commission voted to declare the city’s intent to use eminent domain to acquire property at 154 Olive Street, and 2804 and 2816 Franklin Street for city street and public transportation purposes. The city plans to use the right-of-way to build New Street and extend Washington Street as part of the city’s street grid plan.

The location had been slated for a 66-unit affordable housing development for seniors to be constructed by TBG Residential. The city approved a conditional use permit for the development at the April 28, 2021, board meeting, and approved a variance for the project as recently as May 25, 2022.

City Manager Patrick Bryant stated that TBG Residential had proposed an alternative plan that would require a new variance process.

Sarah Buckner, a senior development manager for TBG Residential, told Decaturish that the project could not be completed if the city takes 0.81 of the total 1.6 acres to build out the new streets. Buckner stated that TBG Residential presented a plan to build their portion of Washington Street and a wide multi use path rather than the full New Street.

TBG Residential presented another plan at the June 8 meeting that showed they would build their portion of Washington Street, and that showed the city it could potentially take about nine feet of Wild Heaven Brewery’s property to build out New Street. The plan also decreased the number of units from 66 to 60, although TBG Residential would need to increase the building height to do so.

David Ladet, the current owner of the property, pointed out that the city would be spending $1.7 million just for part of the land to build out Washington and New Street, which does not include additional land and construction of the road. Ladet estimated that the total cost just for the land would be close to $3 million.

“I have a problem with the city spending the kind of money to acquire that dirt when the developer is willing to give you 90% of what you want,” said Ladet.

Ladet added that he knew plenty of seniors who lived in the city who wanted to sell their homes and needed somewhere affordable to move.

Buckner said that TBG Residential had offered several alternative plans so that the first affordable housing project in Avondale Estates could be built, and questioned the financial logic of the decision.

“What Dave is saying makes an incredible amount of sense to me as a taxpayer and just as a person with a brain in my head,” said Stewart. “It’s a matter of great concern to many of us, I guess old people, how much money is being spent and on what it’s being spent.”

“They’re redeveloping their whole downtown, so there is a place for affordable housing,” Buckner said. “In my opinion, it doesn’t meet their vision of what they want their city to look like. They clearly have a very unique vision, and affordability isn’t a part of it.”

“Not everyone has to love affordable housing, but Avondale certainly has gone out of their way financially, incredibly — an incredible amount of dollars to block affordable housing,” added Brad Smith, senior vice president of TBG Residential. “Not everyone has to love it. Our product isn’t for everyone and that’s okay, but blocking it and spending the kind of money they are to doing that is the problem.”

The city created the plan for a street grid in the 2014 Downtown Master Plan. A new central business district street grid was added to the downtown master plan in December 2019 and street grid incentives are part of the zoning code, which was updated in July 2021.

“The Board of Mayor and Commissioners has made the street grid a top priority because it provides connectivity throughout the downtown for vehicular, bicycle and pedestrian traffic,” City Manager Patrick Bryant said in a statement. “This is the fourth instance in the past two years where the city has authorized eminent domain to acquire property in the downtown to complete portions of the street grid.”

The developers are still evaluating their next steps. TBG Residential has already received low income housing tax credits from the state Department of Community Affairs to fund the project. They will meet with DCA to figure out what their next steps can be.

The condemnation process will take some time, and TBG Residential hopes to work with the city to find a way forward in the meantime.

“We’re willing to have conversations as we have been for the past 18 plus months, and it will just take the city’s willingness to want to have those conversations,” Buckner said. “It does feel as if we’ve exhausted our options about how we could potentially incorporate the street grid, so it’s going to take a partnership from the city and a willingness on their part. If there is a way forward, it’s going to have to be with us working together, which we would still be happy to do.”

In other news, the city set the residential sanitation fees at $596 per housing unit.

“The DeKalb County Board of Education added Druid Hills High School back on the list for reimbursement from the state, which was tremendous,” said Elmore. “I just would like to thank Townes Purdy and Liam Sitz. They were two of the students who put together that video that brought attention to that matter. They were seniors at Druid Hills High School, and they live here in the neighborhood, and I just think that showed tremendous leadership on their part,” said Elmore.

The school board voted in February to remove the modernization of Druid Hills HS from their five-year facility plan. A group of Druid Hills students including Purdy and Sitz made a video about dilapidated and unsafe conditions at the school which subsequently went viral and attracted attention from the press, state legislators, and the Georgia Department of Education.

Elmore and Mayor Pro Tem Brian Fisher both have children who attend DHHS.

“It’s not surprising that kids in Avondale were leaders to do it, because that’s what they do,” said Fisher. “Hats off to them.”