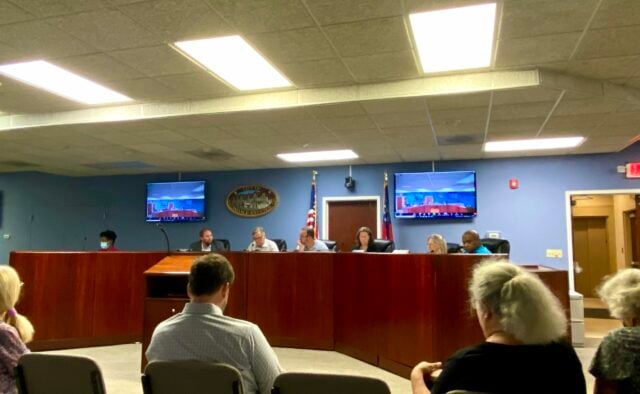 The Avondale Estates City Commission met on June 29 and held a public hearing on the millage rate. Photo by Zoe Seiler.
Share

The board will hold another public hearing and special called meeting on Thursday, June 30, at 6 p.m. to consider setting the millage rate.

The city commission has tentatively adopted the 2022 millage rate, which is 9.8 mills. The millage rate remains the same as 2021 and has been set at 9.8 mills for the last four years.

The city’s property tax collection is estimated to increase by 6.57% based on the increased property valuations from the county.

City Manager Patrick Bryant also explained that he and the commissioners have recently received questions about the Trammell Crow property, which was reclassified from commercial to a brownfield in the 2022 tax digest.

In 2018, Trammell Crow Residential planned to build apartments in Avondale Estates as part of a mixed-use development. That property eventually became known as the Alexan Gateway and features about 270 apartments. At the June 29, 2022, city commission meeting, Bryant said the Alexan has been sold, and he was not aware of the sales price.

Decaturish has reached out to Trammell Crow Residential seeking more information, but has not received an immediate response.

Bryant and Mayor Jonathan Elmore met with DeKalb County’s chief tax appraiser to better understand why the total valuation of the parcels that make up the Trammell Crow property went from $78 million to $53 million, and why those properties were reclassified as a brownfield.

“What we learned regarding the Trammell Crow parcels is this, that 2021 was supposed to be the first year upon which they began paying taxes to both the city and the county under the abatement schedule that was issued by the downtown development authority,” Bryant said.

The Trammell Crow appealed the valuation, and a third party hearing officer reduced the valuation of the appraiser’s office from $78 million to $53 million.

“In addition, they were able to get the hearing officer to provide them with a one-year reprieve from paying taxes because they argued somehow successfully that they were not occupied enough in order to begin paying taxes, and they shouldn’t be paying taxes until they 2022,” Bryant said.

Trammell Crow was granted the appeal, and the city was not notified of the appeal nor the results, he added.

“In 2022, they also successfully petitioned the Department of Natural Resources to classify those parcels as a brownfield rather than commercial property, so that they would also be able to defer paying taxes to the city or the county in 2022, as well, so that their abatement schedule essentially would be delayed two years, and then they would begin paying those taxes to the city and county in the 2023 year,” Bryant said.

The state DNR approves the classification if a brownfield designation is given, and the city was not notified of the change.

“There’s a provision in the law that allows property owners, once they have remediated an environmental concern, to them apply for a tax credit, which allows that credit to go back to paying them for remediating the environmental concern, so essentially it’s a program that incentivizes developers to improve conditions on brownfields in order to construct developments,” he added.

The property owner also appealed the decision of the hearing officer to the superior court, and the hearing has yet to be scheduled.

“The good news, however, is the remainder of the commercial properties within the city have increased in value almost as much as the Trammell Crow parcels were devalued in value,” Bryant said. “When you add up the categories for commercial, industrial and brownfields, there is about an $800,000, give or take, difference in the assessed value from 21-22. But because of that tremendous reduction in value of the Trammell Crow parcels, that is why the total for this year is slightly less than the total from last year.”

During the public hearing, residents advocated for a lower millage rate given the increase in property values.

“I realize that y’all couldn’t do anything about this brownfield, but at the same time, we’ve been spending a lot of money, we’ve been getting into debt, and residents are carrying this burden at a hard time,” resident Lyda Steadman said. “We feel like maybe the city should work harder and maybe try and find ways to cut back, so that they can give taxpayers a break.”

Phillip Feibish noted that the federal and state governments are rolling back their gas taxes, he received a rebate from the state this year, and the city of Decatur is lowering their millage rate.

“Other governments are doing this,” Feibish said. “[Decatur doesn’t] go all the way back to the rollback rate, but they’re doing something…to provide some taxpayer relief and to share this burden a little bit with the taxpayer.”

The city recently sold some parcels of city-owned land to the Downtown Development Authority for the construction of a hotel, townhomes and the Town Green commercial development for $1 million.

“Those original four acres [for the Town Green], I think, was bought with the general fund many years ago,” Paul Dorroh said. “It just seems like that you could use part of that $1 million, just a small fraction, return it to the general fund and decrease the millage rate and just like Alexan, give the taxpayers at least one year of tax relief.”

Liz Goodstein also asked the city to reexamine the millage rate and look into lowering the rate. She noted that now is the time to take action “when people are hurting acutely,” and in order to maintain the community.

She added that it’s about a commitment to equity in the community.

“We were promised that we would not, in the residential district, be continuing to pay all the costs for downtown development,” Goodstein said.