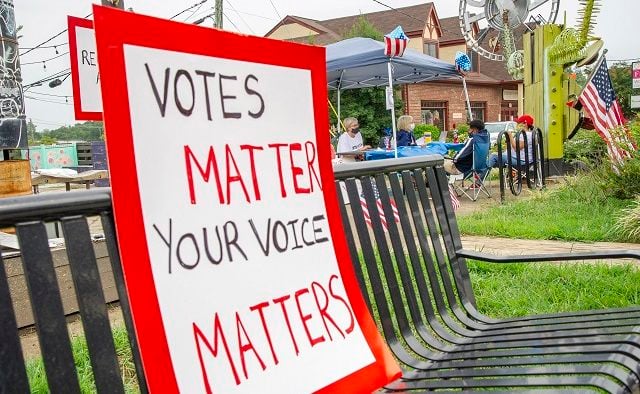 Carol Calvert (l) and Lisa Cottrell handle the voter registration table during a ‘Get out the Vote’ rally hosted by the Avondale Alliance for Racial Justice at the ArtLot in Avondale Estates on September 19, 2020. Photo by Dean Hesse.
Share

The results should be considered preliminary.

VRE originally reported the June 21 runoff was between Orson and Alexander. After a week of review, Lauren Alexander and Michelle Long Spears will go head-to-head in the runoff on June 21.

District 2 results reported on May 24

Note – five additional precincts impacted by a redistricting error are reflected on a second report, which is below and should be added with the first set of votes reported on May 24.

To see the vote totals by precinct reported on June 1, click here.

“The goal of the hand count was to obtain accurate results of the County Commission District 2 race, and I am confident we have achieved that objective thanks largely in part to the diligence of our staff who worked extended hours across the holiday weekend,” Smith said. We are committed to getting these tabulations right, but wanted to ensure that preliminary and unofficial results were posted as soon as practicable.”

Spears said she is turning her attention to the runoff.

“Thank you to the DeKalb Elections Board and Director Smith for revealing the corrected unofficial results of the DeKalb County Commission District 2 race,” Spears said. “I am thrilled to be in the runoff and my team is gearing up immediately.  Since my opponent has been in the runoff for over a week now, we are already at a critical disadvantage in informing voters that I led the race in the Democratic Primary with over 43% of the vote — and now it is important for our team to focus on getting voters back to the polls to elect me as their next D2 Commissioner.”

Alexander said she’s also focusing on the runoff but wondered about the shifts in the vote totals.

“This is my first time experiencing an election as a candidate. Like I’m sure many other people are, I am surprised by the significant change in the reported totals from the hand count in comparison towhat had previously been published by DeKalb Elections,” she said. “I am continuing to monitor the situation and will await further news about this election. It remains important to me that every vote is counted with accuracy and reflects the voters will. Due to the limited time between now and the runoff election date, I need to continue to be prepared for the runoff as we await certification, I continue to support full transparency about this election and the ensuing tabulation of results.”

Orson said his campaign is “reviewing the latest information” provided by DeKalb VRE, and he is considering his options.

“There are serious questions as to the administration of the election and computation of the results,” he said. “The idea that problems related to the programming of the voting machines and the calculation of votes could not ultimately taint every aspect of the process, including the production of the paper ballots, defies belief. We will continue to review our options, keeping at the forefront that any decision should work to foster the integrity and trustworthiness of our electoral process.”

DeKalb VRE at first declined to release results of the hand count of paper ballots, which election workers finished at 12:30 a.m. on May 31, citing questions about the accuracy of the count.

Decaturish filed a formal records request for the immediate release of this information with an explanation about why election officials feel the hand tally count is inaccurate, or provide a legal justification for withholding the information.

The DeKalb County Elections Board on Tuesday, May 31, declined to certify the results of the May 24 primary. Certification could occur as early as Friday at 5 p.m.

Initially, it was expected that the board would certify the results of the May 24 primary on May 31. But the board decided to delay certification until this Friday.

Had Spears not raised questions on Election Night, it’s unclear whether the result would be in doubt at all. Some precincts were reporting she received zero votes – including her own precinct. Spears took pictures of the precinct-level results and showed them to Decaturish on Monday during day two of the hand count. Her supporters, including commissioners Jeff Rader and Ted Terry, began publicly raising questions about what happened.

Here’s what known so far about the circumstances that caused the incorrect result on election night:

Don Broussard dropped out of the race for the DeKalb Commission District 2 seat. That withdrawal caused a mistake in the programming of the precinct scanner and led to inaccurate vote counts for two candidates. The SOS office also said the text of one Republican Party question was not properly appearing during early voting, and five precincts in DeKalb were redistricted into the county commission District 2 race, but those precincts had not been updated to reflect that change.

Elections Board Vice Chair Nancy Jester asked for the results of all the logic and accuracy tests of machines after changes were made.

“My concern when asked as a board member to certify this election: I should feel confident about the District 2 election because we’re doing this hand count,” Jester said during a May 31 Elections Board meeting. “What I don’t know is the … unknowns in any other race.”

Jester said on June 1 that she is awaiting more data and she still has questions.

“I have no disagreement with anybody who says let’s take a harder look at any of these races,” she said. “I needed to be provided with more precinct by precinct data. What are the implications of any of the issues we’ve been looking at for any other races? I don’t know.:

Whitney McGinniss, who is supposed to face Candice McKinley in the June 21 runoff for DeKalb School Board District 2, said she would not be opposed to recounting the results of her race so people could have confidence in the outcome.

“For what it’s worth, I have no specific reason to doubt the results of the BOE 2 race,” she wrote on Facebook. “I have reviewed who was strongest in each precinct, and the geographic patterns mostly match what you would expect. I also believe it was always the case that Candice McKinley and I were the strongest two candidates. So, a runoff between the two of us is not surprising. However, I would not object to a recount of our race, if that is what is needed to restore confidence in our elections process.”

Here is the full press release from DeKalb Voter Registration and Elections:

Issues related to initial election results prompted DeKalb VRE, in coordination with the Georgia Secretary of State, to take necessary steps to identify accurate results of the Commission District 2 contest.

Final results are being tabulated and reconciled, and will be announced when that process is completed.

These unofficial and incomplete results were announced on June 1, 2022 following hand counting efforts. All District 2 candidates were emailed preliminary tabulations from the hand count and unofficial and preliminary precinct-specific data will be uploaded to the State’s election system promptly.

During the hand counting of ballots, three-person teams visually and verbally confirmed the candidate choice on the ballots cast in the District 2 Democratic primary contest.

“The goal of the hand count was to obtain accurate results of the County Commission District 2 race and I am confident we have achieved that objective thanks largely in part to the diligence of our staff who worked extended hours across the holiday weekend,” DeKalb VRE Executive Director Keisha Smith said. We are committed to getting these tabulations right, but wanted to ensure that preliminary and unofficial results were posted as soon as practicable.”

More complete election results will be posted on www.DeKalbVotes.com page under the Election Results tab.