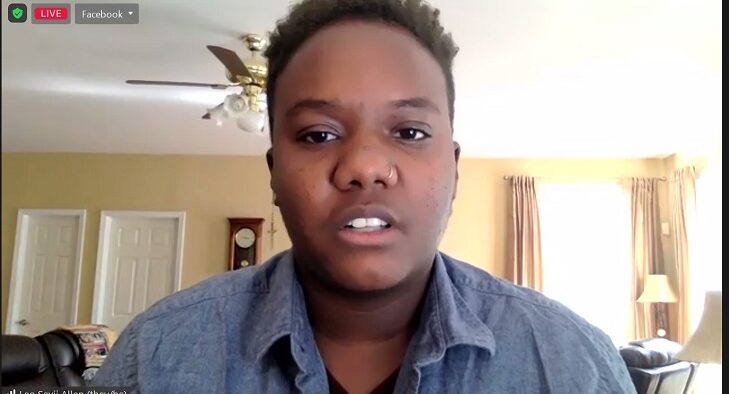 Decatur, GA — Columbia Theological Seminary is once again in the middle of a controversy over how it treats students and staff of color.

The latest controversy stems from the unexpected firing of Rev. Samuel White III, a Black administrator who served as Director of Admissions and Recruitment. CTS fired White and notified the campus community via email on June 21, the day after the Juneteenth holiday was observed.

When asked for comment, a spokesperson for CTS said, “Columbia Theological Seminary is sensitive to students concerns over the departure of Rev. Samuel White. However, it was a carefully considered decision and out of respect for the privacy of all current and former employees and consistent with our policies, we do not comment on personnel matters. We are confident we’ve stayed true to our mission to nurture faithful and effective leaders as well as conduct school business in a forthright and equitable manner. For the record, the institution enjoys a diverse faculty, staff, and students, and we remain committed to delivering the same excellent educational opportunities for which Columbia Theological Seminary is known.”

This isn’t the first time the seminary has faced questions about how it treats students of color. In 2019, CTS students protested after the seminary closed the Office of International Programs, which serves international students.

On Thursday, June 23, members of the seminary’s African Heritage Student Association held a press conference and outlined the steps CTS should take to address their concerns. The school’s enrollment is now majority-minority, with 60% of students identifying as persons of color.

The students want Leanne Van Dyk, who leaves at the end of July, to resign as president effective immediately and want Jane Fahey to resign as chair of the school’s Board of Trustees. The students want the seminary to rehire White, and to create an independent advisory board overseeing the president’s council. When Dyk leaves, she will be replaced by a person of color, Rev. Dr. Victor Aloyo. Members of AHSA worry he will be undermined by the current administration before he takes over.

Leo Allen, vice present of the Student Government Association, said White’s firing is part of a pattern of “ongoing issues of institutional racism” at the seminary.

Rev. John DeLoney, president of AHSA, speculated that the administration is pushing back on the school’s increasing diversity.

“Columbia got too black, too fast, and now we’re facing a Blacklash,” DeLoney said. “I believe Rev. Sam White is a victim of the Blacklash from all of the students of color coming to Columbia.”

When asked why Dyk should resign now as opposed to leaving on July 31, DeLoney said the group worries about what will happen over the next six weeks.

“We don’t know how much more damage she will do in six weeks,” DeLoney said.

Allen said CTS has made attempts to increase diversity, but it doesn’t always act in ways that line up with those attempts.

Allen and other speakers at the event did not go into detail about other incidents of discrimination at the school, and said they have not personally experienced any retaliation for speaking out.

Here is the full letter students sent to administrators at CTS regarding White’s firing:

To members of the President’s Council and Board of Trustees:

This letter comes with deep sadness and tremendous frustration regarding the sudden termination of Rev. Samuel L. White III from his position as Director of Admissions and Recruitment at Columbia Theological Seminary.

We learned of Leanne Van Dyk’s decision – in the final days of her presidency – to terminate Rev. White through an email sent the morning of June 21st, one day after the Junteenth holiday. Rev. White is a dedicated employee and invaluable resource for the entire CTS community, but especially for Black and other students of color. His leadership in the admissions office resulted in the recruitment of one of the largest incoming classes in recent history, and the most diverse incoming class in the school’s history. Without fail, Rev. White is committed to ensuring that the seminary upholds the values and ethics it professes around justice, diversity, equity, and inclusion.

Despite public relations bids to whitewash history, the truth is that President Van Dyk’s tenure has been defined by racial injustice. Discriminatory and retaliatory actions against people of color, members of the LGBTQ community, and other minoritized groups have abound since her arrival in July 2015. To be sure, her retaliatory actions against Rev. White and other Black staff seriously jeopardize the future success of incoming president Dr. Victor Aloyo, the seminary’s first non-white president.

Under President Van Dyk, we have witnessed a series of systematic attempts to uphold white supremacy and perpetuate violence against people of color. Additionally, this administration has effectively undermined the infrastructure supporting the seminary’s growing network of diverse students, faculty, and staff. These include, but are not limited to:

– cuts to funding and support for international students, faculty, and staff

– racial discrimination and microagressions toward students of color

– mistreatment, demotion, and firing of Black, Hispanic, and Asian faculty and staff

– tokenization of immigrant students, particularly those of Korean and African descent

Most recently, the forced resignation of Rev. Brandon Maxwell, Dean of Students and Vice President of Student Affairs, and the termination of Rev. White have given us ample reasons to be distrustful of your leadership as the administration of this institution.

A statement was issued in June 2020 signed by you, the Council and Board, wherein the seminary promised to “critically examine its structures and create new models for education that take seriously the flourishing of Black people in our community and beyond,” and to “better address racial discrimination and violence at every level of our community.” As evidence of racism gained attention in the last several years and came to a head in 2020, you committed to fully funding tuition at the Master’s level for Black students and renaming a new student housing building Marcia Riggs Commons. On the surface, these appeared to some to be meaningful steps toward “repairing the breach” of decades of racial violence and trauma.

However, those of us familiar with President Van Dyk and the current administration were not surprised at these publicity stunts aimed at rebranding and rehabilitating the institution and its image. We are aware that the institution faces multiple legal battles and repeated violations of federal law regarding racial discrimination, the majority of which have been brought forth within the last five years.

Diligent efforts have been made over the last several years to rectify ongoing institutional racism at the seminary. Under the failed leadership of President Van Dyk, and the egregious neglect of Board chair, Jane Fahey, Columbia Theological Seminary has become far removed from its missional focus on “compassion, justice, creativity, and the care of all creation,” and has devolved into a breeding ground for the flourishing of covert and overt white supremacy.

We will not sit by idly, nor will we be silent about these matters.

We, the undersigned, demand the following actions be taken without delay:

1. Leanne Van Dyk must resign from her position as President of Columbia Theological Seminary effective immediately.

2. Jane Fahey must resign from her position as chair of the Board of Trustees effective immediately.

3. Sam White must be provided a generous hiring offer to be reinstated in his position as Director of Admissions and Recruitment.

4. As previously demanded by the Hispanic and Latinx Association in March 2019, an independent advisory board overseeing the President’s Council must be established prior to the start of the Fall 2022 semester. Advisory board members: cannot be employed by CTS or currently sit on the Board of Trustees, must reflect the diversity of the student body in age, national or ethnic origin, gender, sexuality, and denominations or faith traditions currently, and must be authorized to approve all personnel changes at CTS through a majority The advisory board must also review communications regarding personnel changes at least two weeks before they are published to the wider CTS community.

Jesus said, “Whatever you do to [the oppressed], you have done to me.” Dietrich Bonhoeffer wrote, “Silence in the face of evil is itself evil: God will not hold us guiltless. Not to speak is to speak. Not to act is to act.”

President’s Council and Board of Trustees, your words and actions, or lack thereof, to adequately meet our demands will speak volumes not only about your professional commitment to the CTS community, but your personal and spiritual commitment to the justice of God.

With clarity, conviction, and moral courage,