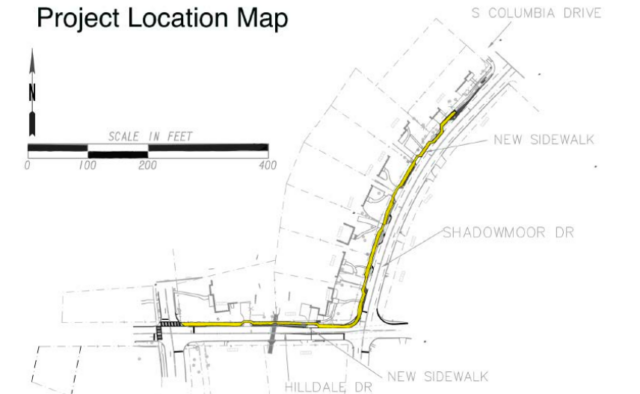 The Decatur City Commission awarded a contract for the construction of a new sidewalk on Shadowmoor and Hilldale drives. Photo obtained via the city of Decatur.
Share

Decatur, GA — Construction will soon begin on sidewalks on Shadowmoor Drive and Hilldale Drive in Decatur. The Decatur City Commission, at its June 6 meeting, awarded a contract to IP Construction for $259,075 for sidewalk construction.

The board also established a project budget of $320,000 for the construction. A new sidewalk will be built on the west side of Shadowmoor Drive and the north side of Hilldale Drive. A concept plan for the project was approved in September 2020.

Residents impacted by the project have executed temporary construction easements when driveway modifications, outside the right-of-way, are necessary. A project schedule will be created and residents will be notified about the timing for construction activities. The city will maintain a walking route as long as they can, Junger added.

“It is a complicated project,” Junger said. “There are tree removals. All that has been discussed with the homeowners. We also have a rigorous plant back component to this project, and the power lines are unfortunately on the same side of the street. There’s going to be some logistical challenges to getting rolling, but just as quick as we can move it forward.”

The proposed changes include planting 125 trees along the project corridor, demolition of hidden asphalt, relocation of a pedestrian signal and exposed aggregate in lieu of sod in narrow gaps, Saxon said.

The Georgia Department of Transportation is covering the majority of the project cost and the increase. The city’s share of the increased cost is about $30,000.

Construction of the project started around Dec. 1, 2021, and the work is expected to be completed by June 2023.

The Decatur City Commission approved the project plans in May 2021. But the project began about 11 years ago. The city went through various rounds of funding options with the Georgia Department of Transportation. When the city had the plans completed about three years ago, it took them the remaining time to obtain all the necessary construction easements, Saxon said at the May 3, 2021, city commission meeting.

The bike and pedestrian improvements on Church Street will complete the final segment of dedicated bike travel lanes from the PATH Stone Mountain trail.

The on-street parking on Church Street won’t exist when the cycle track project is finished.

In other business, Mayor Patti Garrett also asked for an update on the path project along South Columbia Drive.

The plans have been completed, and the city will need to obtain temporary construction easements from some property owners. The path would extend up to the first driveway at Legacy Park on South Columbia Drive, Junger said.

“We need to get the temporary construction easements signed,” Junger said. “One of the project areas in the stormwater master plan was Derrydown. When we repaved last year as part of the LMIG street paving project, we skipped this area because we knew that we had a variety of projects coming — one was the path, two was the stormwater master plan improvement project.”

The city is working with the consultants on a coordinated effort to make sure that if the city moves forward with the path, they won’t end up tearing something back up to do the stormwater project.

The bid process has already started. The city hopes to have the construction easements by the end of the month and be able to proceed with the bids in the fall.