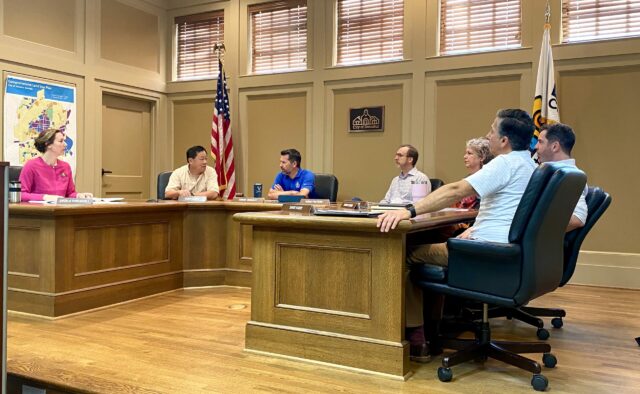 Highlights of the report include:

– The development agreement between the DDA and Atlanta Neighborhood Development Partnership has been executed for the cottage court project and the land was transferred to ANDP as of June 3. The project is located at 230 Commerce Drive.

“The permits have been issued. What we’re kind of waiting on is the timing for the site development,” DDA Executive Director Angela Threadgill said. “It’s not so much the permits because we have those in hand. We’ve had a couple of pre-construction meetings with city staff who be inspecting this project along the way. It’s more about having concrete and other things lined up to keep going with everything.”

Fortas Homes is the builder. They have fully engaged in the permitting activities and expect to begin site work in late July or early August.

According to the plans outlined in their agreement with the DDA, the ANDP would build six cottage court homes: one one-bedroom house, one two-bedroom house, and four three-bedroom houses, with square footage ranging from 528 to 1117 square feet. The estimated sales prices would be between $199,000 and $275,000.

At the Feb. 11 DDA meeting, Threadgill said the design plans for the project have not changed.

The other long-term partner in the project is the Decatur Land Trust, so the board and the developers have to think about the conveyance, covenants and affordability restrictions upfront in the process.

– The mixed-use development, Modera Decatur, is anticipated to be open in the fall. Mill Creek Residential broke ground on the project in the third quarter of 2019. The project includes 194 apartments, up to 25,000 square feet of ground floor retail, new streetscapes, and public art. It fronts onto Clairemont Avenue, Commerce Drive and Church Street.

“I have to say, just coming down Clairemont into downtown, it has really changed that edge of downtown,” Threadgill said. “With the retail commercial spaces coming online, it’s going to really boost that area, I think.”

She added she is not aware of any leasing information just yet.

– The Decatur Arts Alliance plans to issue a call for artists and art this summer for the four public art installations at the Gateway Decatur mixed-use development. The development by Toll Brothers includes a Publix that opened in November 2021, and 290 apartment units that will be finished this summer. The project is located at the corner of North Arcadia Avenue and East Ponce de Leon Avenue.

Toll Brothers donated $250,000 to public art, which will be distributed to the Decatur Arts Alliance with a memorandum of understanding between them and the city of Decatur. The four art installations will be a mural on a retaining wall on East Ponce, an interactive sculpture in the plaza behind Publix facing East Ponce, a sculpture in the apartment complex plaza facing East Ponce, and light installation along North Arcadia Avenue between the retail buildings.

The city is currently reviewing the site development permit application and plans for Northwood Ravin’s Halo East Decatur project. The development will be located at the corner of East College Avenue and New Street. It will include 372 residential units — 41 of which will be affordable — about 16,000 square feet of retail space, a one-acre public park, and 545 parking spaces.

“They are going through permitting. I do anticipate that they will be bringing close to their final facade plans to us,” Threadgill said. “I think they’ve made some changes just based on the unit sizes. Balconies and windows for the bedrooms, those are all kind of changing a little bit.”

– The seven acre site includes properties at 114-134 New Street, and 715-747 East College Avenue. These businesses include Jazzercise Decatur, iWag, and Project Slide. The project runs along the property line of 141 Sams Street, but the existing building will not be affected by the development.

“We continue to try to find spaces that are there for those retail [businesses],” Threadgill said. “I think East Decatur Station, LLC, who owns this property, I think they’re trying to help them find property.”

Threadgill added she has not heard if Decatur Jazzercise has found a new location.

The project has been approved for $5.3 million in funding from the East Decatur tax allocation district over the course of 10 years.

“This is assuming that we would not be paying out of the TAD more than what we are taking in from this project,” Threadgill said.

– The Decatur Housing Authority is building a new office building at 511 W. Trinity Place and anticipates finishing construction by the fourth quarter of the year. DHA is relocating near the Beacon Municipal Complex from downtown Decatur.

– The city has hired Perez Planning and Associates to develop the parks and recreation master plan, which is anticipated to wrap up by the second quarter of 2023. The city owns 153.1 acres of parkland throughout Decatur.

The consultants will also meet with stakeholders and hold public engagement opportunities.