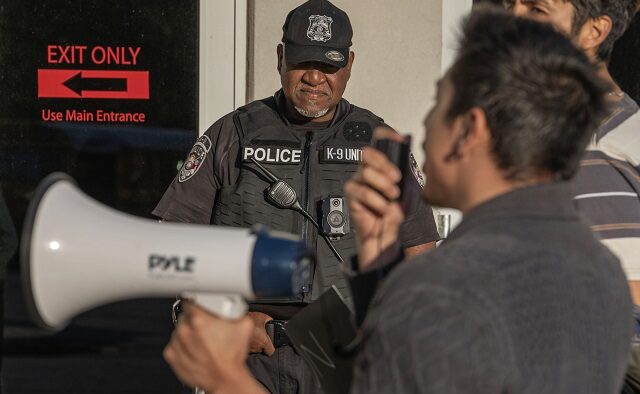 A DeKalb County School police officer looks on as Druid Hills High School students and parents, along with students, educators and alumnae from Cross Keys High School protest school conditions outside of the Robert R. Freeman Administrative Center in Stone Mountain during the DeKalb County Board of Education regular meeting on Monday, April 18, 2022. Photo by Dean Hesse.
Share

DeKalb County, GA — The DeKalb Board of Commissioners and the DeKalb Board of Education held a joint meeting June 22 focused on school safety, in the aftermath of the mass shooting at an elementary school in Uvalde, Texas on May 24.

Gober gave an overview of the existing DCSD public safety department and some plans for the future, including hiring more school resource officers and adding a K-9 unit to detect bombs.

DCSD currently has 78 police officers and is hiring 22 more.

Gober stated that all of DCSD’s school resource officers are required to have Advanced Law Enforcement Rapid Response Training and members of the emergency response team get Federal Active Shooter Threat training to prepare them for emergencies including active shooter situations. The former allows them to coordinate effectively with DeKalb police, who have the same training, and the latter teaches them how to engage shooters when backup is not available.

“There’s no staging, no stopping, no…what they did in Texas. Every officer knows that you go in, you engage the shooter,” said Gober.

Gober described the district’s measures to address potential threats before they emerge, including alerts from students and staff, an app for anonymous complaints, and software to flag certain words on school devices. State and federal agencies including the Department of Homeland Security pass on social media surveillance information to the district.

Commissioners and school board members discussed specific safety measures taken at local schools and discussed resources provided to responding officers, but Decaturish is not publishing those details.

In response to a question from Commissioner Larry Johnson, interim Superintendent Vasanne Tinsley stated that there are no plans to arm teachers.

Board of Education member Marshall Orson praised Gober’s approach, and said that the district needs to balance the need for safety measures against the dangers of visibly militarizing the school resource officers.

“We don’t want to seem like we are in a war zone. There’s a psychological impact. Remember, we’re talking about kids,” said Orson.

Orson also pointed out that some ideas that have been floated nationally, such as limiting entrances and exits, are likely to create more problems than they solve.

Lumpkin described how DKPD coordinates with the school district’s public safety department through the DeKalb Emergency Management Agency and other agencies.

Echoing Gober, Lumpkin emphasized that officers are trained to engage directly and immediately in active shooter situations at schools, with whoever is first on the scene. Lumpkin added that the department offered training to increase officers’ ability to engage in relative safety, but there was no expectation of complete safety in policing.

“We’re not going to stand around and hear gunshots and not take engagement action to neutralize the threat,” said Lumpkin.

The Board of Education and Board of Commissioners periodically hold joint meetings to discuss matters of common interest. Board of Education member Allyson Gevertz suggested that they do so more frequently, with Commissioner Johnson adding that the meetings should be focused on specific topics. School Board member Orson suggested that municipal government officials be included as well for some topics.