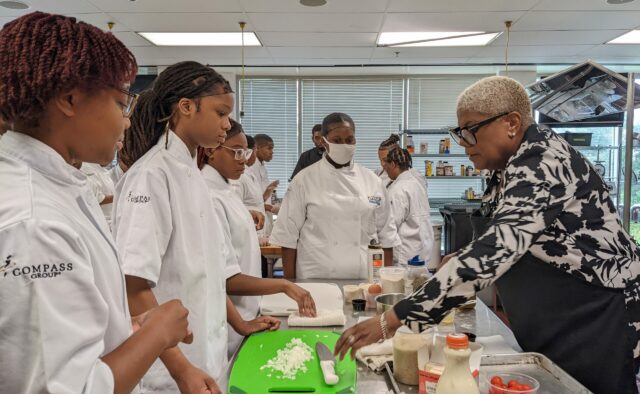 Chef Deborah VanTrece teaching DCSD students during a workshop held at The Art Institute of Atlanta on June 8. Photo by Sara Amis.
Share

VanTrece is the owner of Twisted Soul Cookhouse and Pours and Edible Art. She has been seen on the Food Network, HULU, EATER, Thrillist, and Bon Appetite.

Far from being a lecture in front of a quiet audience, the lessons were hands-on, fast-moving, and full of chaotic action. Students were grouped around tables in the commercial style kitchen chopping vegetables, mincing chicken, and cleaning as they went, just as they would in a restaurant.

The workshop was one day in a two-week culinary arts summer camp, which is the brainchild of Chef Simone Byron. Byron, who is the owner of Byron Hospitality and the 2018 National Restaurant Association Educator of the Year, approached DCSD with a plan to keep students engaged over the summer. Her cooking skills program gives them practical knowledge and puts them face to face with industry professionals.

The program is sponsored by Coca-Cola, Thompson Hospitality, and Compass Group.

“We have a lot of great partners, people that want to be involved, want to help, and want to be present, and that has made it very easy for me to get these programs off the ground,” said Byron.

VanTrece said she got involved through Les Dames d’Escoffier, a philanthropic organization for women in the food and hospitality industry, in which Byron is also a member. VanTrece is the vice president of diversity, equity and inclusion for the local Atlanta chapter. Part of her motivation is to show all the students they can find a place not just working in the hospitality industry, but being in charge.

VanTrece said that things have changed since she attended The Art Institute of Atlanta, but not enough.

“When I was here in these very halls, and it was many years ago, I was one of the few who looked the way that I do,” said VanTrece.

While most of the people who work in the hospitality industry are women, that is not reflected in management and ownership, she said.

“When I look around this room and I see a lot of women, a lot of African Americans, that’s still not the norm in the industry,” Van Trece added.

She also said that her goal was to encourage and mentor students who might assume that a leadership role isn’t for them.

Byron has another summer program in Fulton County and a couple of programs in Charlotte, North Carolina. She wants to expand in the future to accommodate every student who would like to attend.

“I want this to be every single week in the summer from here on out. Camps filled, every week,” said Byron. 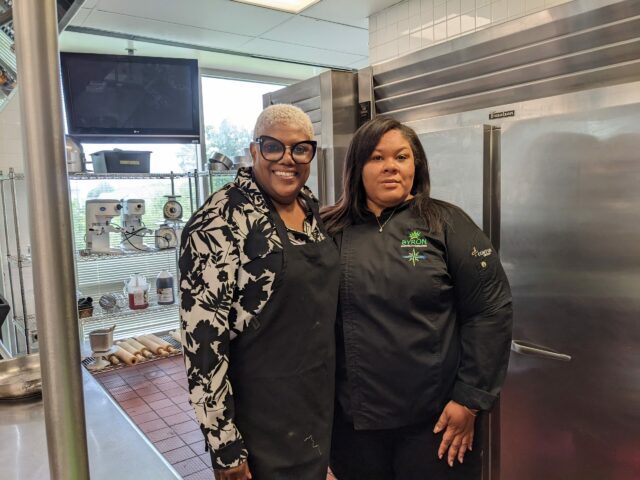 Chef Deborah VanTrece (on left) and Chef Simone Byron (on right) worked with DeKalb high schoolers during a workshop at the Art Institute of Atlanta on June 8. Photo by Sara Amis.

Tom McFerrin, who is a coordinator for DCSD’s Career Technical and Agricultural Education programs, shares her enthusiasm. McFerrin said the culinary summer camp received 180 applications for only 50 spots. Students had to interview for their place in the program, and while some successful applicants had not previously taken any culinary classes, most were from the district’s culinary career track.

DCSD’s MOSAIC for Summer Learning program not only includes the usual academic catch-up classes, but a variety of special interest classes including film, TV, robotics, aviation, and coding. Several of these, including the culinary summer camp, are tied to pathways that can be part of a student’s high school degree.

McFerrin said they received so much interest that he hoped to expand the program in the future, and perhaps even offer a culinary camp to younger students as well as to more DCSD high school students.

“If we could offer a camp to all 180 of those students, that would be great,” said McFerrin.

Students will not just be learning skills, but also making connections, McFerrin added. Coca-Cola, which is a sponsor of the program, operates not only the World of Coke but also the Georgia Aquarium and other downtown attractions. Each of those venues has a food service component, and a goal is to place DCSD culinary track students in work-based learning jobs with Coca-Cola and other companies to gain academic credit and job experience.

Jaliyah Martin, a student in the summer program, said she had never taken a culinary class before, but she really liked the practical, hands-on approach that the summer camp offered. Martin also said it had opened up new possibilities for the future.

“I can see myself doing this as a job,” said Martin.

Ter-Ricka Reid, a rising senior at Miller Grove High School, has been in the culinary pathway since the beginning of 11th grade. Reid said she really loves the chaos and noise of a commercial kitchen, and would like to own a restaurant someday, but her career goal for now is to become an aerospace engineer.

That doesn’t mean the culinary world isn’t important to her. She described entering competitions through the program at Miller Grove, and realizing that anything she did had many possible paths.

“I’m allowing myself to have multiple passions,” said Reid.