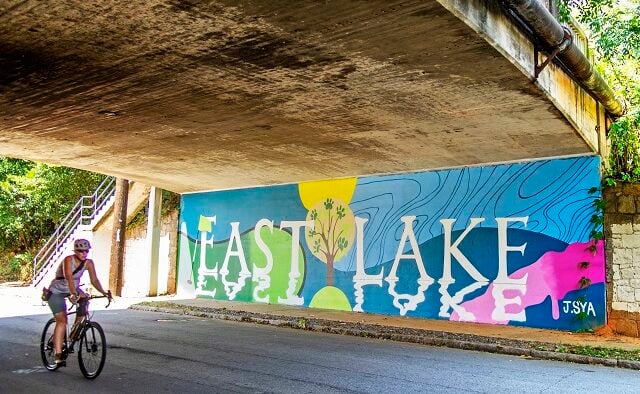 No votes were taken on the proposals. The developer for each project presented their initial plans for their respective projects.

The first proposal was for nine townhomes at 2866 Memorial Drive. The units would be 100% affordable and considered workforce housing. They would be reserved for those who make less than 120% of the area median income.

“It creates an opportunity in an area like East Lake that is no longer affordable,” said Karen Hatcher, president of Sovereign Realty and Management. “In my work in real estate and what I do, it’s all about creating a diversity of housing, a variety of housing stock that many people can afford. With starting townhomes in East Lake and Kirkwood starting at $400,000 and now $500,000 that definitely locks out a lot of our workforce.”

“We’ve been keeping it up. We’ve paid taxes on it. We’ve decided as a board that it was probably in the neighborhood’s best interest to sell this lot if we could do a few things,” Hudgeons said. “One, ensure that commercial creep doesn’t continue down Memorial; two, we could do something meaningful for the community; and three, sell it at a discount rate, but still have some money that comes into our fund to allow us to continue, in perpetuity, to give out grants.”

The development board came across Sovereign Realty Management, who connected the board with the Atlanta Neighborhood Development Partnership. The lot is now under contract with ANDP.

In East Lake, the developers want to build housing designed to service those who live and work in the community, like teachers, firefighters, police officers and civil servants.

“We will build nine townhome units,” said Michael Hatcher, president and CEO of Sovereign Construction and Development. “It will have two three-bedroom, three-baths. Those will be about right under 2,000 square feet, about 1,940 square feet. We’ll also have seven two-bed, two-bath units. Those will come in at 1,240 square feet.”

There will be seven units in the front of the property and each unit will have a garage. The two three-bedroom units and a parking lot will be at the rear of the property. The property has access to Memorial Drive, but no access to Candler Road.

“This development is designed to do a couple of things,” Hatcher said. “First, it’s designed to set a hard border for the East Lake neighborhood that basically limits commercial construction right there at the Candler Road, Memorial Drive intersection and then also limits future commercial creep with development activities further down Memorial Drive as we transition into the more neighborhood centric area.”

Hatcher added the townhomes would create a step-down and transition from commercial use to multifamily townhome use and into single family use, so the project integrates within the existing community.

“The goal is basically to provide a development that allows for workforce and opportunity housing, and also sets them up in a neighborhood and in an area where they can take advantage of the amenities and the sense of community that we’ve all worked so hard to create in the East Lake and Kirkwood neighborhoods,” Hatcher said.

The developers will also try to keep as much of the tree canopy as possible, and if trees are removed, new trees would be planted. They will also maintain a greenspace at the rear of the property.

The developers hope to rezone from R-4 to MR-4B. They plan to apply for the rezoning in July, the proposal will be presented to the Atlanta Zoning Review Board in September and will go before the Atlanta City Council in October.

Some people were excited about the project. Peter McKnight, head of school at Drew Charter School, said he was excited about this housing opportunity for staff at the school.

Jennifer McCrary with the East Lake Foundation said that affordable housing is hard to find in East Lake.

“The challenge is only going to be that it’s just not enough to fulfill the number of people who would love to venture into homeownership,” McCrary said.

“You’re increasing the number of people in the neighborhood,” Cheryll said. “I understand affordable housing, and am very sympathetic for that, but we’ve got this huge development that just went up at Publix. That doesn’t seem to be figuring in to this neighborhood. I just question the need for this because it really changes the neighborhood, the essence of the neighborhood.”

She added that it’s difficult to get through the intersection and worried about the number of units. She also wondered if the developers had considered a smaller number of units.

“I would not be in favor of this,” she said. “That intersection is a horror.” 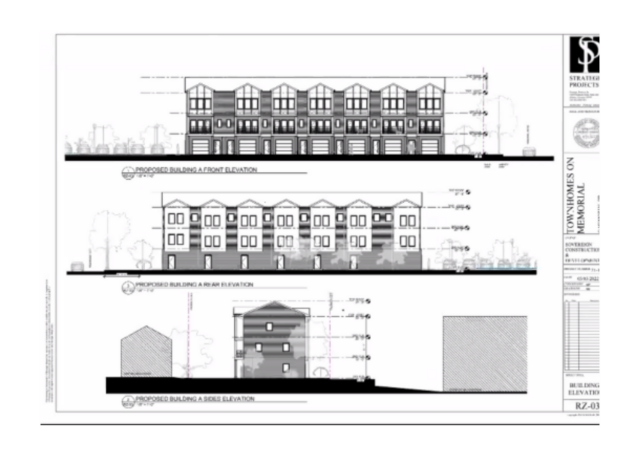 Sovereign Construction and Development presented a plan to build nine townhomes at 2866 Memorial Drive to the East Lake Neighborhood Community Association on June 13. Photo is a screenshot taken during the meeting.

The second townhome proposal presented at the meeting was for 12 townhomes located at 2535 Glenwood Avenue. Lee and Associates Commercial Real Estate Services plan to purchase the property and change the current single family R-4 zoning. The surrounding properties are zoned RG-3, low-density residential, and the developers would seek something similar. They have not specified what zoning they would apply for.

The townhomes would be at the corner of Glenwood Avenue and Carter Avenue, which would be near the entrance of the Olmstead community. The lot is about one acre.

“Basically, the overall feel is we want to make this feel like an extension of the Olmstead community,” said Michael Palazzone, an associate with Lee and Associates. “We want to do something nice, but we also want to create additional units for people in this community to live in. We believe that housing is the American dream, and we want to create more housing in this community. We see an acre of land along Glenwood Avenue as a good opportunity to do that.”

Palazzone added that the developers felt 12 units was a reasonable number to achieve and doesn’t add a lot of density.

The developers are looking to incorporate more parking into the community, maintain greenspace between the townhomes and the neighbors, and deed some land to create a right turn lane out of the neighborhood to try to take some traffic off of Carter Avenue.

Residents in Olmstead raised concerns about traffic, safety and the density. Some residents suggested the developers build four to six townhomes instead of 12 units, and added that the area is a cul-de-sac, so the potential townhome residents and delivery trucks would create more traffic.

Eighty-six residents in the area participated in a survey about the project, and Mikki Harris shared a statement from those residents based on the survey data.

“The neighborhood supports three single family detached units on the current R-4 lot,” Harris said. “We will consider supporting proposals that require alternative zoning for up to four to six units that are accessed from Glenwood Avenue that have ample greenspace, street parking, walkways and maintain the integrity of the oak trees. However, we do not support plans that would require up zoning for a higher density of units.”

She added that concerns held by the neighborhood include:

– The impact of increased vehicle traffic from residents, delivery drivers and guests,

– Pedestrian and motorists safety at a congested entrance

– Threats to oak trees and the natural barrier of landscapes, and

– Increased foot traffic with the potential for trespassing on the private greenspace and gazebo areas owned by the Olmstead HOA. 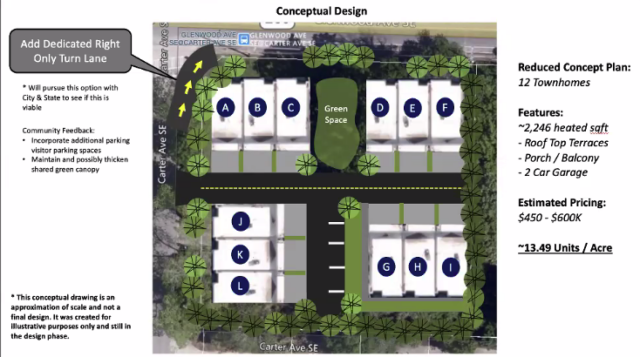 Lee and Associates Commercial Real Estate Services presented a conceptual design of 12 townhomes at 2535 Glenwood Avenue to the East Lake Neighborhood Community Association on June 13. Photo is a screenshot taken during the meeting.