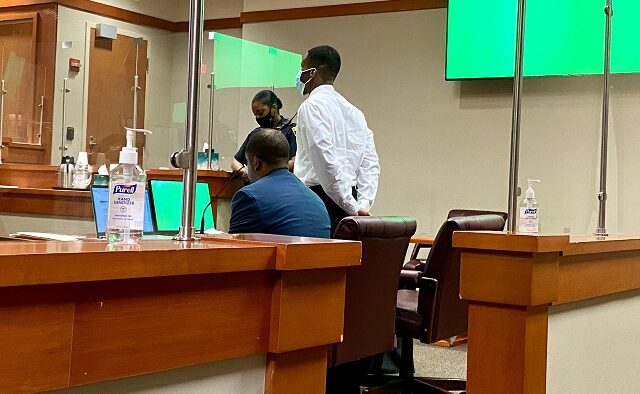 By Dan Whisenhunt and Zoe Seiler

Decatur, GA — Following a two-day trial, a DeKalb County jury on June 30 found Rickey Thomas guilty of starting the fire that burned down Java Monkey in 2018.

Thomas was convicted of four out of five counts:

Thomas was sentenced on Thursday afternoon. He was sentenced to a total of 30 years. He will serve 10 years in custody and a portion of his sentence on probation.

“I just wanted you to please have mercy on me,” Thomas said. “Please give me the opportunity once I finish this sentence to continue with my life.”

The Java Monkey was located on Church Street,  a short walk away from the DeKalb County Courthouse. It was a Decatur institution for 25 years.

The prosecutors said Thomas walked down a tiny alley bordering Java Monkey, grabbed a stick, broke the window to the office and threw something through the window that caused the fire.

The state’s key piece of evidence was a limited-edition Air Jordan backpack that Thomas owned. It can be seen on a person captured in a surveillance video taken near the scene of the fire the night Java Monkey burned. The prosecutors claim that the person in the video set the fire.

“This is the backpack,” said Ryan Patrick, an attorney for the prosecution. “This is not a common, everyone-has-it backpack.”

Patrick further stated, and the defense agreed, that the backpack belonged to Thomas. East Point Police Officer April Jackson testified earlier this week that Thomas had the limited-edition Air Jordan backpack with him when he was arrested.

The state also alleges Thomas made an incriminating statement in a text message to his roommate at the time.

The message in part states, “just so you know that if I go down, so are you. I’ve got most of the iMessages and emails that I’ve sent to you referring the incident that took place at Java.”

Thomas’ attorney, Adam Petty, has said there’s “no particular evidence” that ties the person in the surveillance video to the Java Monkey fire.

“What I would like to mention to you all [the jury]…there’s one video, there’s one book bag, there’s one tiny alley, but countless possibilities,” Petty said. “There is no evidence that is going to be able to be seen on that video of anyone starting a fire…You see a person walk in the frame, you see them grab some sort of stick or pole or something, they walk out of the frame.”

The defense has also argued that in the text message, Thomas did not admit he was the person who burned the Java Monkey. Petty argued Thomas was referring to the fact that there were warrants out against him.

Petty added there was a second person who was fired from the Java Monkey around the same time as Thomas. He wondered if that person was also considered to be a suspect.

“That’s evidence that at least we should have heard about,” Petty said. “That’s a part of the investigation that’s critical and vital to determine, if we’re going on the theory that because someone got fired, they’re liable to burn a building down. If we’re operating under that theory, you got two people who were terminated from the same business.”

Jurors deliberated most of Thursday before rendering their verdict. This story will be updated when more information is available.