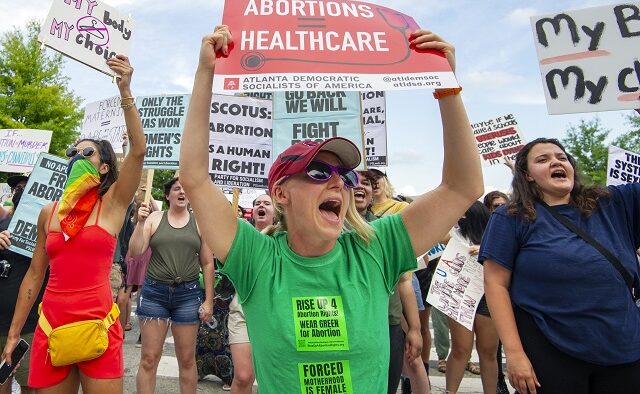 Atlanta, GA — In the aftermath of the June 24 United States Supreme Court decision overturning Roe v. Wade, both the business community and Georgia Democrats are attempting to chart the way forward in a shifting legal and political landscape.

The Dobbs vs. Jackson Women’s Health decision overturned 50 years of precedent protecting abortion in the U.S. as a constitutional right.

Georgia Democrats held a press conference on Monday, June 27, to discuss the ramifications of the Supreme Court’s decision.

Congresswoman Nikema Williams, chair of the Democratic Party of Georgia and formerly the Vice President for Public Policy at Planned Parenthood Southeast, described the decision as a calamity that 68% of Georgians do not agree with.

Despite the lack of popular support, Georgia’s six-week abortion ban, currently under appeal, is one of the most restrictive in the country.

“This disastrous decision in Dobbs v. Jackson clears the way for Republicans to roll back the fundamental rights of women to make their own healthcare decisions, including right here in Georgia,” said Williams.

State Senator Jen Jordan, who is the Democratic nominee for Georgia’s Attorney General, said that she would not defend Georgia’s abortion ban because she believes it is unconstitutional, both on the Federal and state level.

“You can’t tell me that you have a Federal constitutional right for over half a century, and then in one day, it’s gone,” said Jordan. “That has never happened before in the history of our country.”

Jordan thinks there is a potentially stronger argument to be made on the state level. The American Civil Liberties Union plans to file a new challenge to the law under the state constitution. Jordan pointed out that the Georgia state constitution has stronger privacy protections written into it than the U.S. Constitution, which have been reaffirmed many times.

“There is absolutely a viable path to challenging it under the Georgia constitution,” said Jordan. “That’s what the Supreme Court has said we need to do, to put it in the hands of the voters of the state of Georgia.”

“State level elections are where the battle is,” added Jordan.

While some anti-abortion activists have called for the Georgia legislature to write an abortion ban into the state constitution, Jordan said that was unlikely to happen.

“They need a two-thirds majority and they don’t have it,” said Jordan.

Jordan pointed out that an estimated 50% of pregnancies end in miscarriage, often without the woman even realizing she is pregnant. Potential fallout of restrictions on abortion includes criminalizing miscarriage and placing women who may already be grieving a lost pregnancy under suspicion.

“A miscarriage, whether natural or chemically induced, looks the same forensically,” said Jordan. “This is so far-reaching that it will affect every single person in Georgia.”

Dr. Kelly Coffman, who is a candidate for State House 53, is also a reproductive psychiatrist, is frustrated, sad, and angry about Roe v. Wade being overturned.

“There is absolutely no reason that politicians should be inserting themselves between a patient and her doctor,” said Coffman.

All the speakers talked about the dangers of forcing women to carry unwanted pregnancies to term when Georgia’s existing pregnancy and postpartum care is inadequate.

“Georgia has consistently ranked as one of the worst states for maternal morbidity and mortality. What that means is, women die. Pregnancy is incredibly dangerous, both during pregnancy and postpartum,” said Coffman. “My patients express their fears about all of this on a daily basis.”

“When over half of the counties in Georgia don’t even have an OB/GYN for women to get the care that they need, that’s unacceptable,” said Williams.

“When it would be safer for a woman in south Georgia to give birth in Pakistan than it is in the rural South, we have a real problem,” said Jordan

At a June 27 media briefing offered by Emory University, Dr. Wes Longhofer spoke about the impact of the Dobbs ruling on businesses in Georgia and beyond, as well as larger social implications.

Longhofer is a sociologist and the Executive Director of the Business and Society Institute at Emory’s Goizueta Business School, and he recently co-authored an article in Foreign Affairs, titled, “A Post-Roe World? Why Abortion Battles in America Won’t Halt Reform Abroad.

Longhofer began by acknowledging that the situation is very fluid.

“There’s a lot we don’t know,” he said.  A number of companies including Starbucks, Disney, Dick’s Sporting Goods, JP Morgan Chase, and others have pledged not only to provide abortion care as part of their health insurance packages, but to pay for travel expenses, so employees can get out of state abortions if necessary. Other companies have chosen to relocate employees, and may make decisions about conferences and new facilities based on abortion bans.

Patagonia and Live Nation pledged to post bail for any employees arrested while protesting the Supreme Court’s decision.

However, those companies are not in the majority. Most prefer to make no changes and stay out of public debate. Additionally, states that have laws against “aiding and abetting” abortion may expose companies to legal entanglements.

Longhofer said that companies are increasingly expected to weigh in on social justice issues, and in doing so, tend to follow public opinion. According to a survey by goBeyondProfit, 91% of Georgia employees expect their CEOs to take stances on social issues.

“The bar for what companies should do has been raised, but arguably the stakes have also gotten much higher,” Longhofer. Employees want more than statements from companies, but also want to see action.

In addition, Longhofer said, Americans trust businesses, specifically the companies they work for, more than any other institution, including media and the government. This is partially due to familiarity, but also due to the polarization of American politics and the growing gap between what most people want and what the government actually does.

The majority of the public both in Georgia and the country as a whole opposed the overturn of Roe v. Wade, but the current state government is bent on restricting abortion rights further and Congress doesn’t seem capable of protecting them.

That is an inherently unstable situation.

“The United Nations has a framework for business and human rights which says that only states can protect human rights, and businesses must respect them,” said Longhofer. “When human rights are only guaranteed by the private sector, that means they are no longer universal or accessible to everybody.”

Longhofer added that, “Most people do not work for the thirty or so companies who have announced these benefit packages [for abortion access].”

Correction: An earlier version of this story misstated the percentages reported in a survey. This story has been updated with the correct information.