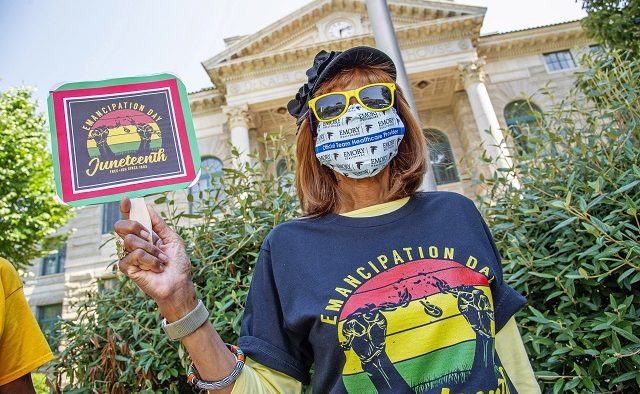 “With temperatures and the heat index expected to be in the 90s, the county is cancelling the event out of an abundance of caution,” a press release from the county states.

DeKalb County, GA — Cities across the county and metro Atlanta will celebrate Juneteenth this weekend with music, food, kids activities, and various other festivities.

Juneteenth commemorates the day when slaves in Galveston, Texas, learned they were free. President Abraham Lincoln signed the Emancipation Proclamation in 1862, and it went into effect on Jan. 1, 1863. But the slaves in Galveston weren’t informed until June 19, 1865.

“Robert E. Lee surrendered to Ulysses S. Grant on April 9, 1865, thus ending the bloody Civil War,” DeKalb Commissioner Steve Bradshaw said at the county’s Juneteenth celebration in 2021. “Yet the news of this did not reach Black people in Galveston, Texas, until June 19 of that year. Now, in this modern day and age, it’s hard to imagine that news of something so enormous would take so long to reach anyone but that is how it was. So we celebrate June 19, or Juneteenth, as a day of freedom and liberation. It is all together proper and fitting that we should do this.”

Here is a look at the Juneteenth events happening this week:

Eyedrum, a local DIY space, and curator, William Downs, will celebrate talented Black, women artists at a Juneteenth celebration to close this spring’s Stars and Feelings show. The event will be held on Sunday, June 19, from 2-6 p.m. at eyedrum, 515 Ralph David Abernathy Boulevard SW in Atlanta. The art party event will include DJ Michi Meko and refreshments, according to a press release.

“I’m bringing together a group of Atlanta-based artists that have been creating within a five-mile radius of my life,” Downs said. “The thing that ties these Black artists together is that they stay true to their passions and are constantly creating work and honing their studio and mural practices.”

The six artists chosen to participate in the show share a focus on expressing their identities, whether it is through hair, heritage, or community. Artists include Danae Antoine, E L Chisolm, SOFAHOOD, Nneka Kai, Ash Mcnamara, and Jasmine Nicole Williams.

“Stars and Feelings is an experience where artists share their thoughts, dreams, anxieties, emotions, and compositions. These artists utilize mark-making and color, not only to channel their physical and mental gestures into their work but also to make you feel something,” Downs said.

The Michael C. Carlos Museum will offer free admission on Sunday, June 19, in honor of Juneteenth. Free admission to the museum will give visitors the chance to experience the permanent galleries, and the special exhibition of “Indigo Prayers: A Creation Story.”

Celebrate Juneteenth with Atlanta artist Charmaine Minniefield, whose recent work, “Indigo Prayers: A Creation Story,” is featured at the Michael C. Carlos Museum at Emory University. The event will be held on Saturday, June 18, at 5 p.m. at the museum. The evening will feature a gallery talk in the exhibition. After the gallery talk, participants will board a private coach and travel to the King Historic District for an exploration of Minniefield’s mural “Cosmic Cypher, Prayer Circle.” The mural is a panoramic depiction of the Ring Shout painted on the interior of the historic water tower on Auburn Avenue. A reception and tour of Minniefield’s Studioplex will follow.

Space is limited and registration is required. The fee for the event is $25 for Carlos Museum members and $50 for non-members.

The National Center for Civil and Human Rights will celebrate Juneteenth with a weekend of programming on Saturday, June 18, and Sunday, June 19. The center will also launch its first new exhibit of the Dr. Martin Luther King Jr. Voice to the Voiceless Gallery in over two years, featuring “A Legacy of Creative Protest: King and Youth Activism” on June 18.

The exhibit explores how a generation of youth activists in the 1960s inspired Dr. King’s campaign for equality and helped transform political landscapes from the Civil Rights era to present-day through innovative means of protest. Young organizers, through their innovation, galvanized the movement, emboldening King to adopt creative ways of protesting to reach and grow a national audience, according to a press release.

The center will celebrate Juneteenth with a variety of activities that will be included in the price of general admission. Guests are encouraged to purchase tickets in advance online. Activities will include music curated by DJ Sed the Saint to pay homage to the day of Jubilee, immersive theater performance of Got So Far to Go—a piece that outlines the successes of emancipation and the Civil Rights movement, and craft tables and activations for young learners, and much more.

“Juneteenth is a portmanteau of the words ‘June’ and ‘nineteenth’ which marks the date, June 19, 1865, that enslaved people in Galveston, Texas learned they were free – just under two-and-a-half years after Abraham Lincoln signed the Emancipation Proclamation,” said Nicole Moore, Director of Education for The Center. “The Center celebrates this moment of liberation by sharing more about the history of Juneteenth to show its significance as a national holiday and to spread the jubilee of occasion.”

The city of Avondale Estates will have Juneteenth programming during the Weekend Wind Down on Sunday, June 19, at 5 p.m. The city’s Juneteenth Advisory Committee has been working to create an event that creates a welcoming, inclusive space, educates on Juneteenth and its history, elevates Black performers, artists and businesses, and provides a fun, celebratory event. The Atlanta Resistance Revival Chorus, acappella group Vocal Pointe, DeKalb School of the Arts members of Def Poets, and more will open for Grant Green Jr., the headliner of the Weekend Wind Down concert series.

Jazz guitarist Grant Green Jr. will perform from 6-8 p.m. Green is a member of the group Masters of Groove with Bernard Purdie and Reuban Wilson. He began playing the guitar at the age of 14. His neighbors included Stevie Wonder’s parents, Marvin Gaye, and members of the Four Tops. He has worked with Richard Groove Holmes, Leon Thomas, Jimmy McGriff, Lou Donaldson, and Lonnie Smith.

The city of Clarkston, in partnership with Wow! Afro, is hosting Clarkston’s annual Juneteenth festival on Saturday, June 18, from 10 a.m. to 2 p.m. on Market Street in downtown Clarkston. The event will feature food, music, storytelling, vendors, a kid’s corner, entertainment and more.

Join the city of a day of celebration and remembrance to commemorate the ending of slavery and appreciate the African American experience.

The Clarkston City Hall will be closed on Monday, June 20, in recognition of Juneteenth.

DeKalb County CEO Michael Thurmond and the DeKalb Board of Commissioners present the county’s second annual Juneteenth celebration on Saturday, June 18, from 11 a.m. to 2 p.m. at the bandstand on the Decatur Square. Festivities will include food, music, entertainment, face painting, and more. The event is free and open to the public.

DeKalb County offices and the Decatur City Hall will be closed on Monday, June 20, in recognition of Juneteenth.

The city of Pine Lake is hosting a Juneteenth event on Sunday, June 19, from 2-4 p.m. at the Pine Lake Beach House. There will be a showing of the Netflix miniseries “Amend: The Fight for America,” which depicts how Frederick Douglass, after escaping slavery, became a pivotal voice calling for citizenship for Black Americans, a dream realized in the 14th amendment.

Pamela Poole-Starks, a Pine Lake resident, spoken word artist, storyteller and poet, will perform. She will portray exchanges between Sojourner Truth and Frederick Douglass. There will be coloring tables for children with popcorn, drinks and snacks.

The city of Stone Mountain will hold their second annual Juneteenth Celebration Festival on Saturday, June 18, from 3-8 p.m. The event will feature live music, inspiring interviews, dance performances, food trucks, vendors and activities for kids. An attachment from the Greater Atlanta Buffalo Soldiers will be present and will provide a display of their historical items. The festivities will end with “No Diggety Band” performing a selection of hip-hop, R&B and pop songs.

Citizens for Family Activities in Tucker is hosting a Juneteenth event on Saturday, June 18, from 10 a.m. to 3 p.m. CFAT will hold a unity walk down Main Street Tucker round the corner to the Church Street Park. The march starts at 10 a.m. at the intersection of Main Street and Railroad Avenue. Festivities will run through 3 p.m at Church Street Park.

Guests will also be able to enjoy dance recitals from Dance Studio 33 School of the Arts, entertainment from Kim Eugene Armstrong and his A Popular Dance routines, live music from The Men of Simply Awesome Band, Upgrade Atlanta Band, and Atlanta Platinum Band. Kids entertainment area will be provided by Gaming Transit Extreme.

Tucker City Hall will be closed on Monday, June 20, in recognition of Juneteenth.