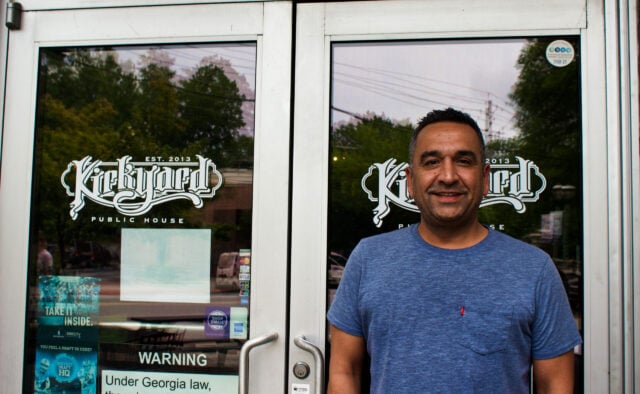 Shahrokh Fard was a regular customer at the restaurant, and he took over ownership in May. Fard and his family live within walking distance to Kirkyard Public House, and he became friends with the former owner, Dano Kirk.

Kirk owned the restaurant for about eight years. He owns two businesses and was looking to focus on one, Fard said. He and Kirk started talking about new ownership earlier this year, and negotiations took a couple of months. Fard and Kirk closed their deal on May 23.

Fard has a background in real estate. He owned a real estate appraisal firm from 1999 to 2013. He has flipped houses and is a realtor.

“I know people. I know customer service,” Fard said. “I brought [in] two good buddies that I’ve known over 20 years. They own successful restaurants/bars outside the perimeter.”

His friends can help with the front of the house, the back of the house, and the kitchen to get the restaurant in order for the next 12 months and Fard will take over from that point.

“Without them, I wouldn’t even consider buying the place,” Fard said.

Fard said the people and customer service is what attracted him to the restaurant business.

“It was a good fit,” Fard said. “I kind of took a break for three years, and then I realized, okay, the break is over. You need to do something. What am I gonna do? This kind of popped up on me, and I was like, okay, make sense. It’s right around the corner. The place has been open for eight and a half years, with the love and support from the neighborhood it’s survived, even through COVID.”

“It’s the only sports bar in Kirkwood. The beauty about Kirkwood and what I love about Kirkwood [is] there’s not many neighborhoods with a downtown district, and Kirkwood’s one of them,” Fard said. “We specialize in bar food.”

Menu items include chicken wings, burgers, chicken tenders, appetizers and salads. Fard said the wings are a top seller at the restaurant.

“It’s bar food but kicked up a few notches,” Fard said. “We fortunately have a great executive chef, Juan, he’s been here since day one.”

The chef worked with Kirk at Taco Mac before opening Kirkyard Public House.

“We’ve been working together in the last couple of weeks trying to source better ingredients and figure out what’s working and what’s not. Some items just don’t sell. We’re going to remove those. We’re going to add better menu items. We just changed up our burgers by sourcing better buns, brioche buns, and better ground beef.”

“We’re known for our sauces. Juan makes all the sauces in house,” Fard said. “I’m not going to get rid of the sauces.”

Customers can expect the inside of the restaurant to change its appearances. Fard has some renovations planned to paint, open up the second floor, make minor repairs, replace the ceiling fans, redo the stairs, renovate the bathrooms and possibly get new equipment.

Fard plans to begin renovating the space in a couple of weeks in stages, so he doesn’t have to close the restaurant. He anticipates the work to take about two weeks.