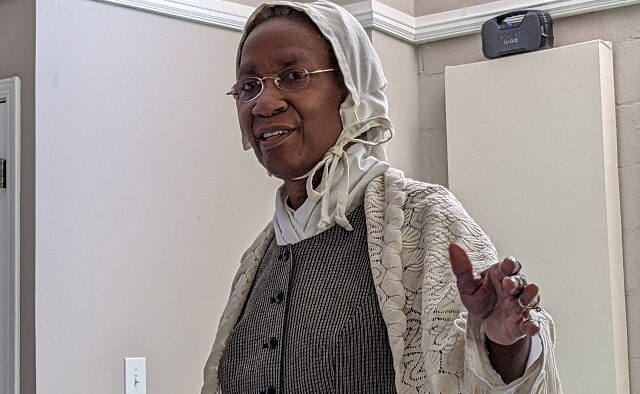 Pine Lake, GA — Pine Lake celebrated its first official Juneteenth with an educational program that included a screening of the first episode of “Amend: The Fight for America” and a performance by local storyteller, poet, and Pine Lake resident Pamela Poole-Starks.

Pine Lake city council member Augusta Woods recounted the history of the holiday, stating that while President Abraham Lincoln issued the Emancipation Proclamation in 1863, many enslaved people did not receive the news until two years later.

“Juneteenth recognizes that on June 19, 1865, the last enslaved people in Galveston, Texas were informed that slavery had been abolished,” said Woods. “This is what created the celebration, also known as Freedom Day, Jubilee Day, Liberation Day, and Emancipation Day.”

Poole-Starks is a member of Kuumba Storytelllers of Georgia, an affiliate of the National Association of Black Storytellers.

Poole-Starks portrayed Sojourner Truth, who was born into slavery in the late 18th century and escaped to become a well-known abolitionist and suffragist. Poole-Starks’ performance was based on careful research, including exchanges between Truth and Frederick Douglass among others.

Poole-Starks recounted an incident in which a young man threatened to burn down the building where Sojourner Truth was scheduled to speak, in an attempt to intimidate her. Truth responded, “Then I will speak over the ashes.”

The event was well-attended, and Pine Lake Mayor Melanie Hammet said that this year’s Juneteenth celebration was only the beginning.

“We’re hoping to build it out from here,” said Hammet.