Sharon Saliba Wess remembered for activism, kindness to others

Sharon Saliba Wess remembered for activism, kindness to others 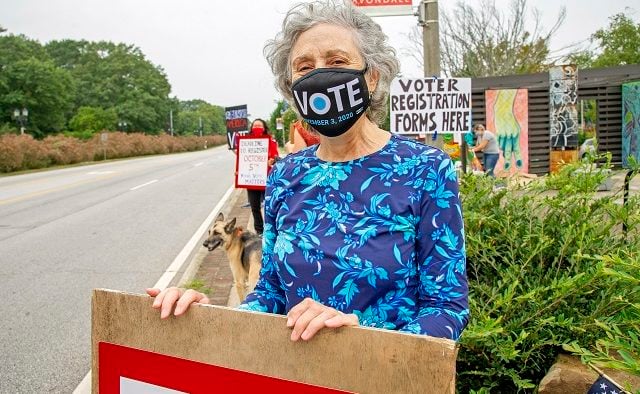 Avondale Estates, GA — Long-time Avondale Estates resident Sharon Saliba Wess will be remembered for her service to the community, frequent dancing and her kindness to others.

Saliba died on April 26 at Emory Hospital in Atlanta. She was 70 years old.

She was born on April 8, 1952, in Anderson, South Carolina. Saliba was the daughter of Dr. Elias Sapp Saliba, Hartwell optometrist and Joan Haddad Saliba, former mayor of the City of Hartwell, according to her obituary.

She is survived by her husband, Dr. Robert (Bob) Wess, a retired college professor, and real estate broker. She is also survived by her older sister, Rita Saliba Smith, and her younger brother, Dr. David Elias Saliba.

At Hart County High School, Saliba was a standout defensive player on her state championship basketball team. Her coach called her “the meanest player he ever coached,” although she was always smiling. She continued playing sports throughout her life and went on to coach her sons’ basketball teams in Decatur.

“As competitive as she was, her mantra in life was to always support the underdog,” the obituary states.

Saliba moved to Atlanta in 1980 and married her husband, Bob, on July 19, 1986. The pair were constant companions and partners in everything they did. By 1991, the couple had two children, Robert George Wess and Michael Elias Wess. While the boys were growing up, Saliba dedicated her time caring for of her family and volunteering at her children’s schools.

Saliba also championed volunteer causes in her community and focused on women’s rights, racial justice, and immigrant and refugee companionship. Recently, she was a member of the Avondale Alliance for Racial Justice, Avondale ACTion the Welcoming Committee of Avondale Estates, and the garden clubs in the city.

“I used to see Sharon walking nearly every day – often with her dog,” Avondale Estates City Commissioner Lisa Shortell said. “She was out and about and loved to visit with neighbors. Sharon cared about community. She was a person who was tolerant of and willing to listen to differing opinions. She assumed good intent from others even when she disagreed with their perspective or decisions. She wanted to see our community members care for, respect, socialize, and work toward the greater good with each other in spite of our differences.”

“I remember Sharon easing tensions in public comment with her humor and good nature,” Shortell said. “An intention shared by her and repeated by [city commission] members on occasion was of her desire to roller-skate in the (now nearly finished) Town Park. Sharon made us laugh when we needed it. She will truly be missed.”

Saliba was a founding member of Avondale ACTion and served on the organization’s leadership team from the time it was formed, Avondale ACTion member Bruce Johnston said.

“She cared deeply about progressive political values and worked tirelessly to protect our democracy,” Johnston said. “No task was too small or too large for Sharon to undertake. She could be counted on to show up for marches, rallies, protests, meetings, postcard parties, and meetings. You name it, Sharon was there until her health prevented her from participating.”

Shortell said Saliba fought cancer over the years. Even during grueling treatments, she maintained interest in Avondale ACTion’s activities and participated in the decision-making processes of the organization, Johnston added.

“She was the epitome of a great activist,” Johnston said. “But, more important than her activism, was Sharon the person. She loved life and lived it to the fullest. She loved her extended family so very much and basked in their accomplishments. She was proud of her Lebanese heritage. She was profoundly kind and thoughtful with her wide circle of friends, putting others first.”

Johnston added that those who knew Saliba have stories about her love of dancing. She managed to dance to any kind of music, at any social situation.

“Her laugh was infectious, and one heard it frequently. She was simply a joy to be around and always made people feel good,” Johnston said. “Sharon left this world too soon, and the world is poorer for her loss. She lives on in the hearts of her husband, her two sons, her extended family and all of us who count ourselves fortunate to have counted Sharon as a friend.”

Saliba was also an enthusiastic member of the city’s Welcoming Committee, said Connie Bryans, chair of the committee.

“In true Sharon style, she almost passed out from exuberant dancing at our Placita Latino festival – smiled after cold water on her head brought her around,” Bryans said. “She joined our Zoom call only about a week before her death, full of ideas on how we could make Avondale a more welcoming community to all.”

Saliba could be seen at many events hosted by the Avondale Alliance for Racial Justice, from protests to voter registration events and art contests.

“Sharon was an amazing and inspiring woman who was a member of the AARJ Community,” AARJ member Carol Calvert said. “She came to our very first protest in June 2020 and was a constant presence at all of our events. Sharon was always willing to show up in any way needed — standing (or dancing) on corners, making and holding signs, hauling things in her van, setting up and cleaning up. She brought passion and infectious upbeat energy to everything she did. She had a vision of a kinder and more just world, and she worked in so many ways to make it a reality. She has certainly left the world a better place, and I know her ripples will continue on and on. We are so grateful to have shared the journey.”

“She was a fierce and yet compassionate person, always giving more than she was taking,” her obituary says. “With her sons’ friends, Sharon was welcoming and generous. She was magnetic, always drawing people toward her. At every restaurant dinner, she would entertain the group by blowing straw wrappers into her loved ones’ faces. At most social gatherings, she would remember to bring hula-hoops to get the party started. For school luncheons, she would bring Lebanese food to share her culture with her sons’ classmates. Hers was a carefree, socially unbridled spirit. Sharon was truly loved by all who knew her.”

A memorial visitation for Saliba Wess was held on Saturday, May 7.