The trial of Rickey Thomas: Day 1

The trial of Rickey Thomas: Day 1 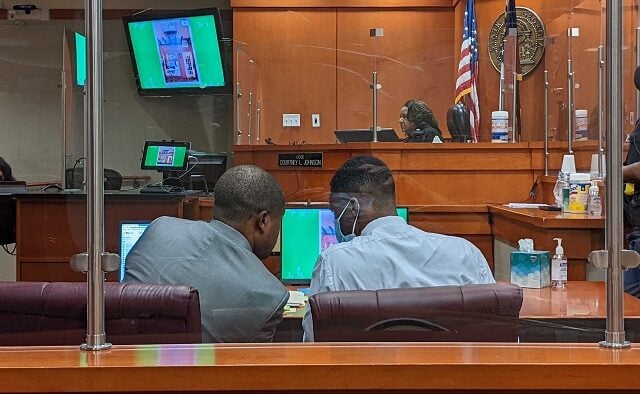 Decatur, GA — The Java Monkey was a Decatur institution for 25 years, serving as a space for breakfast, business meetings, and poetry readings.

It burned down in 2018. The Java Monkey was located on Church Street,  a short walk away from the DeKalb County Courthouse where the trial of the man accused of starting the fire got underway this week. At first glance, nothing in Rickey Thomas‘ background suggests he would do something violent. He has a lengthy record, mostly for shoplifting and petty theft. When he was hired at Java Monkey, he at first appeared to be a model employee.

But prosecutors allege that Thomas began behaving strangely, and his conduct resulted in his termination. After he was fired, Thomas laughed and allegedly later returned to burn the Java Monkey down, prosecutors say.

The state’s key evidence is a backpack owned by Thomas that can be seen on an individual pictured in surveillance video taken near the scene of the fire on the same night Java Monkey burned. The state also alleges Thomas made an incriminating statement when he was eventually taken into custody.

“It’s not a complicated case,” the prosecutor said. “He’s a disgruntled employee, wearing the backpack at the scene. Then he talked about [the crime].”

Thomas‘ attorney, Adam Petty, argued the state’s case is weak. He said there’s “no particular evidence” that ties the person in the surveillance video to the Java Monkey fire. Petty said the state’s case rests mostly on the limited-edition Air Jordan backpack.

“That’s the crux of the case,” Petty said. “Is that book bag the same book bag my client was arrested with months after?”

He said the state would not be able to produce enough evidence that Thomas was the person in the video, or evidence that he is guilty of starting the fire.

The state waited until July 2021 to indict Thomas, a delay that was partially due to disruptions caused by COVID-19. The day began with testimony from David Stickland, the father of owner Lora De Roover.

Stickland bought the business for his daughter, and he was also the one who fired Thomas. He remembered Thomas being proud of the Air Jordan backpack. He said that at first, Thomas was a great employee. But his behavior deteriorated. He began taking selfies of himself not working. Stickland said shortly before he fired Thomas, he received a complaint that Thomas was sitting on the bar of the Java Monkey and proclaiming he wouldn’t serve anyone because he was high.

Stickland said when he fired Thomas, “he just laughed in my face.”

Stickland said he had no insurance on the property, saying he left that task to his daughter, and she neglected to do it because she was overwhelmed with running her new business.

“I didn’t think someone was going to burn it down,” Stickland said.

To be sure, there was some bad blood after Stickland bought the business. De Roover, the young entrepreneur, made some big changes. She switched to Lavazza coffee, made by an Italian company, and took some food items off the menu, like salads. When Decaturish tried to interview her after the purchase, she declined to have her picture taken, citing concerns with people who were unhappy about the recent changes.

Stickland noted the restaurant had a large staff turnover when his family took over, saying “they didn’t like the way we changed the company.” He said things had to change because Java Monkey wasn’t profitable under its old ownership.

“She and I were trying to find something in between being a Starbucks and local coffee shop,” Stickland said.

In later testimony, a city of Decatur fire investigator Kevin Rice said that police were initially told of another employee who was fired around the same time as Thomas.

Rice told Petty, Thomas‘ attorney, that he believed the other suspects had been interviewed.

Most of Tuesday’s testimony was about the fire investigation itself. In addition to Rice, jurors heard from Assistant Fire Chief and Fire Marshal Ninetta Violante. Rice and Violante walked the jury through the investigative process, including when they began their investigation, how they labeled the sides of the building, and how they examined the evidence. Rice explained how he determined the fire was deliberately set and not caused by an electrical malfunction or a gas leak. The fire began in the office area. The investigator concluded that someone had knocked out the office window from the outside.

In a video shown to the jury, the man wearing the Air Jordan backpack could be seen carrying what prosecutors called a “mop handle.” Prosecutors alleged he used it to throw “some kind of flammable material” into the office, starting the fire.

After ruling out accidental causes, Rice concluded someone had deliberately started the fire.

Police were unable to find Thomas for months after issuing the warrant for his arrest. Records show he was arrested around April 1, 2019.

East Point Police Officer April Jackson arrested Thomas after responding to a call about a dispute between roommates. Jackson said Thomas was surprised when she told him he had an active warrant out of Decatur.

“He was shocked,” Jackson said.

The officer said Thomas had the limited-edition Air Jordan backpack with him when he was arrested.