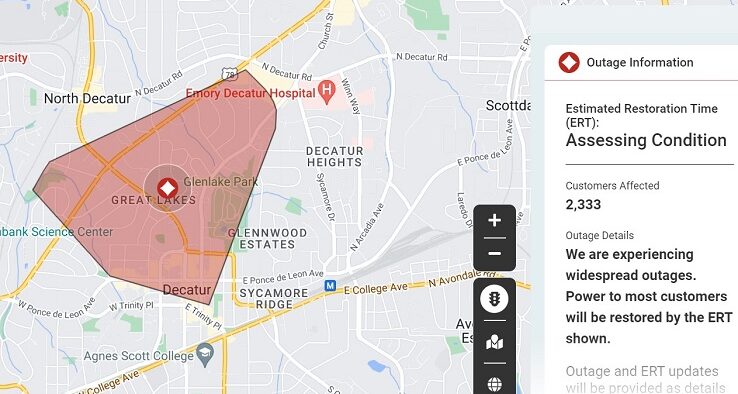 A map showing the location of the power outage in Decatur. Image obtained via Georgia Power at 6:20 p.m.
Share

The main outage was resolved around 8 p.m. There are still other outages being reported.

Georgia Power spokesperson John Kraft said, “The last of the customers from the main Decatur-area outage we discussed earlier were restored just after 8 p.m., however, groups of those customers began being [restored] throughout the afternoon and evening.”

Kraft said a smaller outage is usually addressed by rerouting those customers. Because of the size of this particular outage, Georgia Power’s control center had to divide up the affected customers, shifting portions of them to different circuits in groupings to allow the company to work on the underground cable that caused the problem.

Here is our earlier story:

The issue has also caused traffic lights in Decatur to stop operating.

A spokesperson for Georgia Power said an underground cable problem caused the issue, which affected about 3,700 customers in the city north of West College Avenue.

“I checked into this and found we have a problem with an underground cable near the substation and we are actively working to reroute power and get customers restored,” spokesperson John Kraft said.

The power outage comes as residents are trying to keep their cool amid soaring temperatures.

In response to temperatures that have inched toward 110 degrees, DeKalb County on June 15 opened up cooling centers. The National Weather Service says, “Heat index values [will be] between 105 and 109 degrees.” The advisory is in effect until 8 p.m. this evening.

Decaturish asked Kraft whether the heat wave might’ve played a role in the power outage. Did people using power to stay cool cause an overload?

“I asked our operator about that earlier,” Kraft said. “He explained that underground cable issues like this happen year-round. We don’t currently have a specific cause on this one.”

This story will be updated when more information is received.