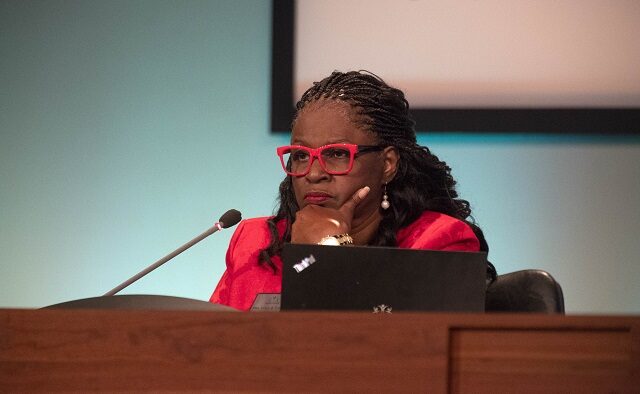 Current Chief Financial Officer Charles Burbridge was hired in October 2020 essentially to fix the problem. Based on the Fiscal Year 2021 audit of the district’s finances, conducted by the Georgia Department of Audits and Accounts, Burbridge succeeded in stopping the bleeding, but the patient appears to be still in recovery.

The district began conversion to its new financial system in 2019 and has not completed the transition thus far. The audit describes the results as a likely increase in errors and omissions, higher costs to the district, and a heavier burden on employees leading to higher turnover.

The audit identifies the causes as a lack of adequate project management and lack of internal communication.

“The School District lacked sufficient communication between management, project staff, IT staff, HR staff and accounting staff to consider the impacts of extending the use of the legacy system while operating the new financial system simultaneously,” the audit says. “There was no detailed project plan or timely course correction when the new financial system implementation target dates were missed.”

Similarly, the delay in implementation of MUNIS creates weaknesses in the district’s general financial controls as noted in the audit.

“We noted the School District did not have adequate general controls in operation to protect the integrity, availability and confidentiality of information maintained in significant financial applications,” the audit says.

While not mentioned in the state audit, the district has also demonstrated weaknesses in controls over student data as reported by the Chamblee High School Blue and Gold student paper and WSBTV.

Inadequate controls over employee compensation resulted in overpayment to several employees, including a $10,000 doctoral degree supplement to an employee who did not hold a doctorate.

The audit noted that the lack of supervision and documentation procedures also contributed to the deficiencies found in the district’s allocation of Elementary and Secondary Emergency Relief Fund dollars.

The auditors sampled the district’s allocations of ESSER funds and found a significant number were not adequately documented. Based on the sample, they projected that nearly $959,493 had, at the very least, a question mark hovering over it:

The report was careful to say that this does not mean that nearly a million dollars in ESSER funds are missing or misallocated. However, it does mean that because of weaknesses in internal processes, the district can’t guarantee that they aren’t.

As a result of the audit’s findings, the Georgia DOAA designated DeKalb as a school district at “moderate risk.”

When Burbridge and interim Superintendent Dr. Vasanne Tinsley presented the audit’s findings at the July 11 Board of Education meeting, board members received it as good news while acknowledging the need for more work to be done.

“I just want to thank you for getting us from late and high risk to on time and moderate risk,” said board member Deirdre Pierce.

“Just in my years on the board we have come light-years on the audit,” said board member Allyson Gevertz.

The corrective action plan required by a new state law that went into effect on July 1 will be presented at the August board meeting and must be signed by all board members. However, board member Dr. Joyce Morley indicated her willingness to delay that process, asking, “What if we don’t all agree?”

Tinsley responded that her administration would attempt to answer all questions that board members might have and expressed confidence that any concerns would be worked out.

An official release from DCSD’s spokesperson Donald Porter acknowledged the deficiencies noted in the audit but expressed optimism about the district’s ability to resolve them, saying, “Dr. Tinsley remains confident that the District will address the findings identified in the report and work diligently towards a clean, modified audit.”