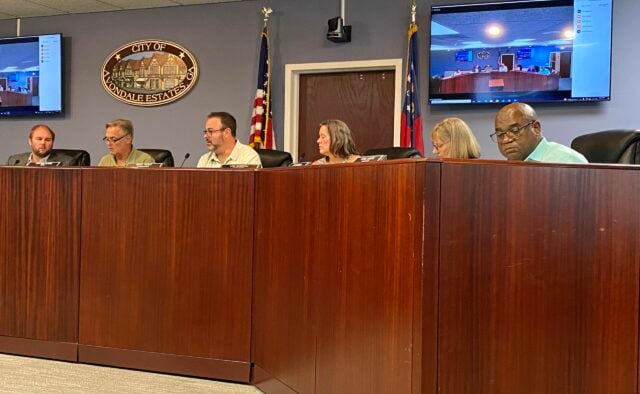 Avondale Estates, GA — The Avondale Estates City Commission is considering a corner lot setback text amendment that would be made to the city’s zoning code.

The city’s zoning code establishes a front yard and street side setback of 40 feet for properties zoned R-12 and R-24.

“The goal is to allow people to be able to do things on these properties – renovate them or expand them and hopefully not tear them down, but that some may be appropriate for a tear down, but to not prevent development, but try to make sure that development fits within the character of the city,” Mayor Pro Tem Brian Fisher said at the July 13 city commission meeting.

The city commission asked the staff to look at the impact of the dimensions on the development of corner lots with help from Lord Aeck Sargent. The study evaluated existing conditions of corner lots, the ability to build on lots with different streetside setbacks, and the typical widths of lots.

There are about 50 corner lots that are zoned R-24 and the existing setbacks are typically larger.

Fisher added that the path the city is taking to address the corner lots based on the size of the lot and the height of the homes is the appropriate way to go.

– The city commission approved a contract with Katrina Cline, former finance director for the city of Newnan, to perform various finance director-related functions, which include developing the 2023 budget for the city and downtown development authority, creating the 2021 audit report, and preparing the city to transition from the bond anticipation note to bond issuance among other tasks.

The contract will run from July 18 to Oct. 14, and could be extended. Cline will be compensated at $60 per hour, but her total compensation cannot exceed $31,200.

– The city commission approved a resolution allowing the city manager to contract for the repair of stormwater infrastructure at 1264 Berkeley Road. The city received three quotes. Southern Premier Contractors submitted the lowest quote at about $59,700.