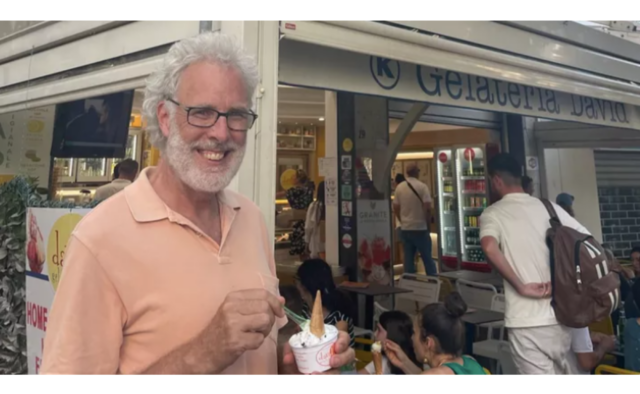 David Schneberger, a Decatur resident, suffered various injuries while traveling in Italy and the community is raising money to cover his medical costs. Photo courtesy of Louise Schneberger.
Share

Decatur, GA — Beloved Decatur resident David Schneberger was known for telling jokes and asking people for jokes around the city. He was also quite the cyclist and volunteer according to his friends.

“It is with great sadness that we must share the news of David’s death,” Louise Schneberger, Dave’s sister, wrote on his Caring Bridge page. “Although he seemed to be moving forward in a positive manner, he succumbed to his injuries early in the morning July 21, 2022. The family is working on a plan to bring him home from Italy. Currently that is all we can focus on. Once we have him home plans for a celebration of life will be put in place.”

The family has created a photo album for those who knew Schneberger to share photos. To view the album, click here.

“I know we are all devastated that we won’t see him again or hear his voice in this life, but let’s cherish the time we spent with him and be comforted that Dave will live in our hearts forever,” said Maya Hahn, a friend of Schneberger.

His family and friends are also fundraising to cover medical costs and expenses.

Schneberger was traveling in Italy with his daughter when he took a 50-foot fall on the Amalfi Coast in June. He suffered extensive injuries — a brain bleed, seven fractured ribs, collapsed and bruised lungs, a dislocated hip and a broken ankle. Schneberger was airlifted to a hospital in Italy, according to the GoFundMe.

The GoFundMe was created on July 4. Since then, 179 people have donated and over $20,000 has been raised to cover Schneberger’s medical and transportation costs.

“The inspiration for the Go Fund Me is that the medical bills will be horrendously expensive, and we have no idea what will happen when we can finally get him home as far as medical bills and whatever sort of medical treatment he will need when he gets home,” Louise said.

Schneberger has become known as the joke guy in Decatur, Louise said. Wise, a friend of Schneberger, said one of the first times they went to a restaurant together, Schneberger asked the waiter if they had any good jokes.

“I learned he loves jokes, to tell them and to learn new ones and to get other people to think about jokes,” Wise said.

Louise added that their father loved jokes and the family was always sharing puns. Some of Schneberger’s favorite jokes are anything that has to do with a chicken, like why did the chicken cross the road?

“He loves bad dad jokes. The last time I was there we were sitting out in front of his condo and the UPS guy went running by to deliver something and said ‘I’ll be right back. I have a joke for you,” Louise said. “Then we were at the Raging Burrito and one of the people in the kitchen came out and said, ‘joke guy, I have a joke.’ He asks a perfect stranger on the street, you got a joke?”

Schneberger was also active in a writer’s group that Wise started in their condo.

“The several of us who are in the group, many are doing memoir type things, but he always brings his poetry,” Wise said. “It’s always been so fascinating, because he has a way of writing. He’s very attuned to music… and so he sometimes does presentations where he’s reading his poetry, but he’s kind of singing it or has a melodic flow to what he’s written.”

The friends also praised Schneberger’s volunteer work and willingness to help people, especially his neighbors when they can’t reach something in a tall place.

“He’s very easy to become friends with,” Wise said. “Whenever I needed help in my condo, I’m fairly short, and he has been called upon and has responded very generously to help with things.”

Akroyd added he volunteers with Soldiers Angels and at a church soup kitchen.

Schneberger was quite the cyclist as well, his friends shared. He would ride bicycles in the mountains. When recovering from previous brain surgeries, he rode a recumbent bike for a while. He eventually got back on a two-wheeled bike on a beach near Decatur, with his ex-wife’s blessing at the time.

“We got the bike [with] big wheels. He wore a helmet and long sleeves in case he fell,” Louise said. “It was like teaching your kid to ride. You’re holding the handlebar. You’re holding the back of the seat, and I gave no thought to people on the beach…The whole beach stood up and cheered and clapped for him. It was so cool.”