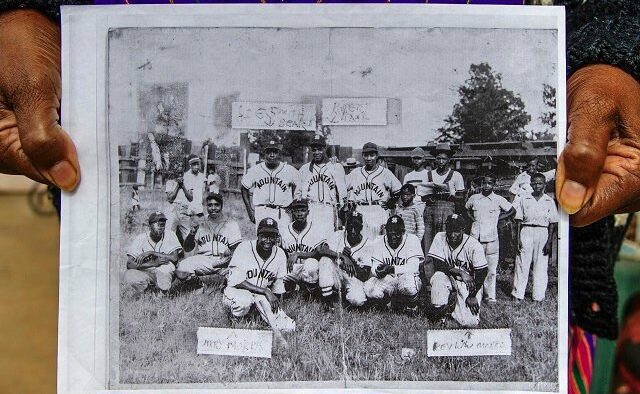 Elaine Vaughn holds a copy of a photograph of the Shermantown community’s semi-pro baseball team, the “Hard Rocks.” Her father Charlie Stewart is 2nd from right on the first row. Rev. William Woodson Morris, Sr. the only living member is at the end of the row to Stewart’s left. The date of the photo is possibly 1954. The team was organized in 1946. Photo by Dean Hesse.
Share

Decatur, GA — Decaturish and Tucker Observer photographer Dean Hesse has received an Award of Excellence from the Atlanta Press Club in the photo essay category.

The award was given to Hesse’s photo essay about Shermantown, the historic Black neighborhood on the South side of downtown Stone Mountain.

“I’m very proud to have received the Atlanta Press Club’s Photo Essay Award of Excellence,” Hesse said. “‘There’s a lot of love in the community of Shermantown’ was a project I wanted to do for a long time. When I pitched it to Dan for Tucker Observer, he was all in. It wouldn’t have happened without his support. Most importantly, I thank the wonderful people of Shermantown who gave their time and shared their stories. They are family to me. It’s a great honor to work alongside such a talented team of journalists at Decaturish and Tucker Observer, and it makes me better every day at what I do.”

“There’s a lot of love in the community of Shermantown” is about a tight-knit, giving community that is important to the history of Stone Mountain, Hesse said. He spent about a month working on the project, getting to know the area and those who live there.

“The people I interviewed lived through Jim Crow, segregation and the Klan marching down their streets in front of their homes, and people need to hear that,” Hesse said.

Hesse explained the project to Shermantown residents he knew, and they all agreed to participate.

“Beverly Jones, who I’ve known for years and is now the mayor of Stone Mountain, was an immense help. She agreed to come out with me one day and introduced me to a few people I hadn’t previously met and helped me locate where the Klan held their rallies and pointed out some other places,” he said.

He also worked with Mary Beth Reed, the president of New South Associates and president of Stone Mountain Historical Society, to learn about the historical context of Shermantown.

“I went out several days alone to make photos,” Hesse said. “I have been welcomed for years to events in Shermantown, but never dug into the community’s history. So when I had the opportunity with the launch of Tucker Observer to do that, I felt it was the right time, even though I felt limited by the ongoing pandemic.”

Editor and Publisher Dan Whisenhunt said longtime readers of Decaturish and Tucker Observer won’t be surprised by the news of Hesse’s award.

“Dean is easily one of the best news photographers in the Atlanta area,” Whisenhunt said. “The thing I appreciate most about Dean, other than his incredible eye, is his work ethic and professionalism. He never phones anything in. He loves what he does and it shows. We could not be prouder of him.”

Here are a few highlights from the photo essay: 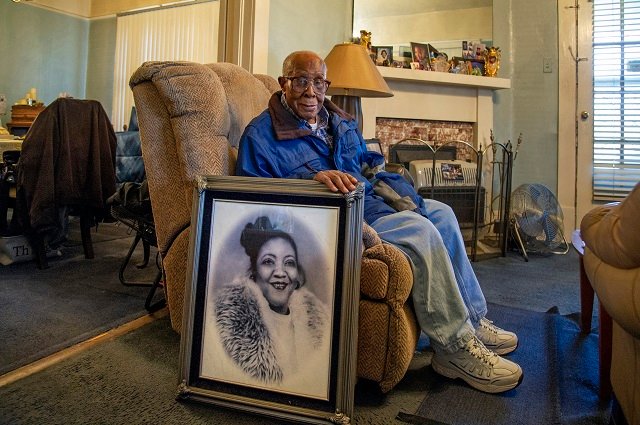 Rev. William Woodson Morris, Sr. sits with a portrait of his late wife of over 50 years, Mrs. Lucille B. Morris in the living room of the house where he was born in 1928 and still lives today in Stone Mountain’s Shermantown community. Photo by Dean Hesse. 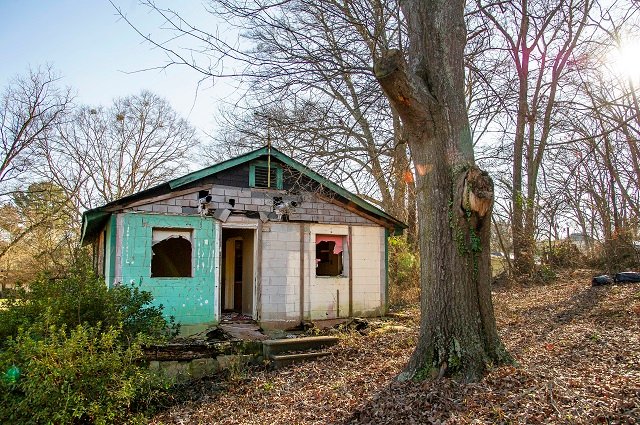 An abandoned building, possibly once a hair salon or other business in Shermantown. Photo by Dean Hesse. 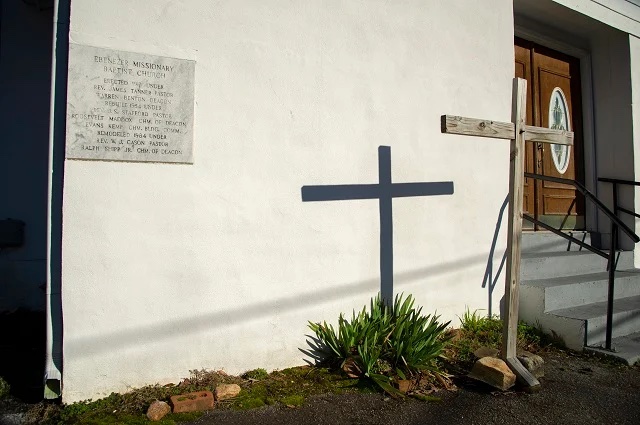 The front of Ebenezer Missionary Baptist Church originally erected in 1917, rebuilt in 1954 and remodeled in 1984. Photo by Dean Hesse.

Here’s a look at some more noteworthy work from Hesse: 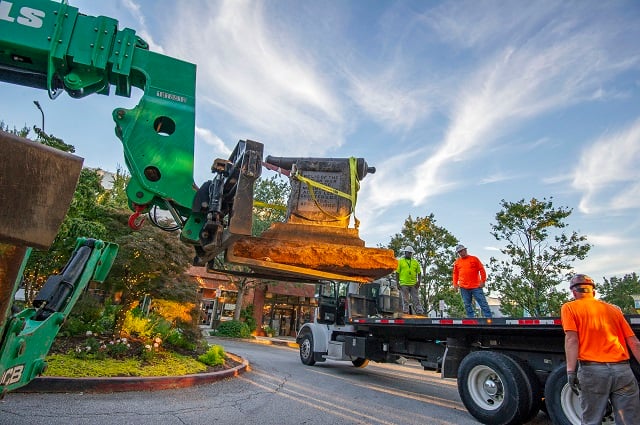 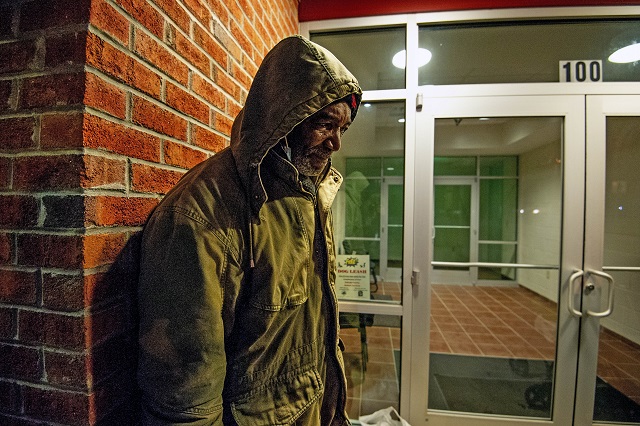 Barry Martin waits outside for the warming center at DeKalb County Fire Station No. 3 in Avondale Estates to open on Thursday, Jan. 6, 2022. Photo by Dean Hesse. 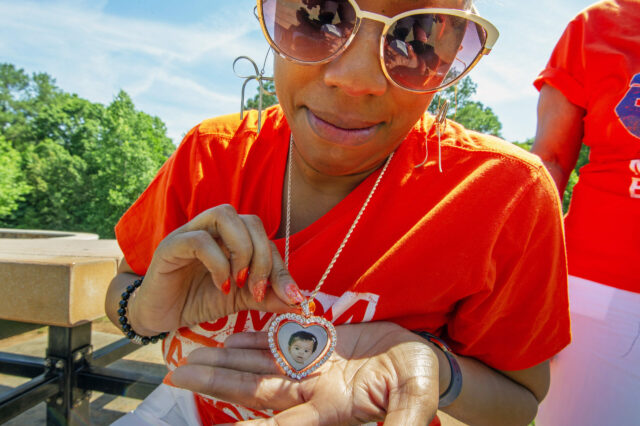 During a Moms Demand Action event at Yellow River Park in Stone Mountain on Sunday, June 5, 2022, Lisa Thomas shows a pendant with a photo taken of her daughter Naya Ruffin as a child. Naya was 22 years-old when she was killed by gunfire in April 2022 in Indianapolis. She leaves behind a one-year-old daughter. Photo by Dean Hesse. 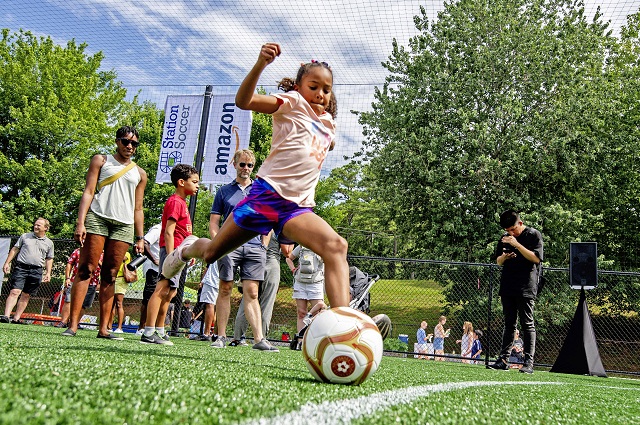 Nine-year-old Zoe Johnson, who said wants to be a professional soccer player, goes for the goal during the grand opening of the new StationSoccer location at Kensington MARTA Station in DeKalb County on Saturday, July 16, 2022. Photo by Dean Hesse. 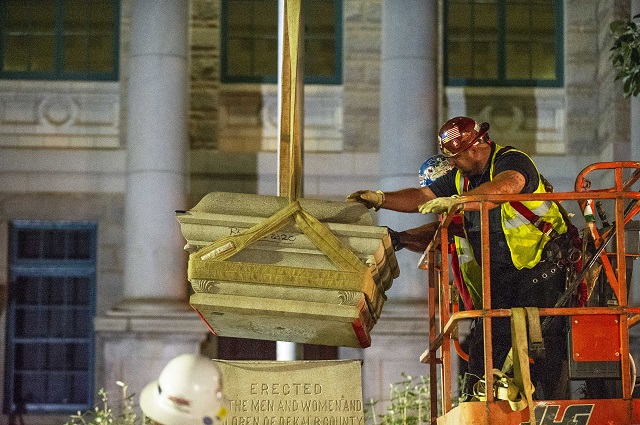 A crane lifts off another section of the Confederate monument on the Decatur Square June 19. Photo by Dean Hesse. 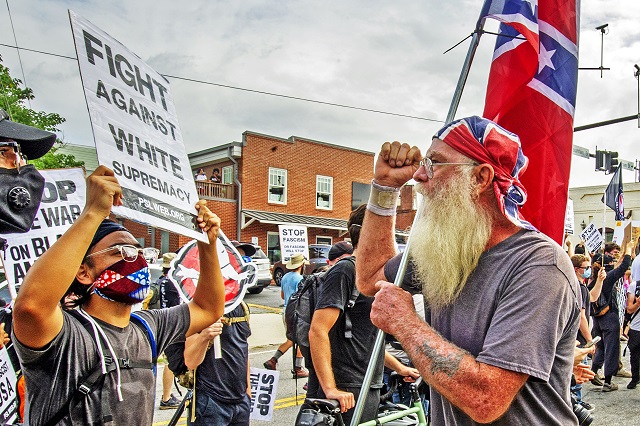 Counter protestors and right-wing militia members face off during a rally in the city of Stone Mountain, August 15, 2020. Photo by Dean Hesse. 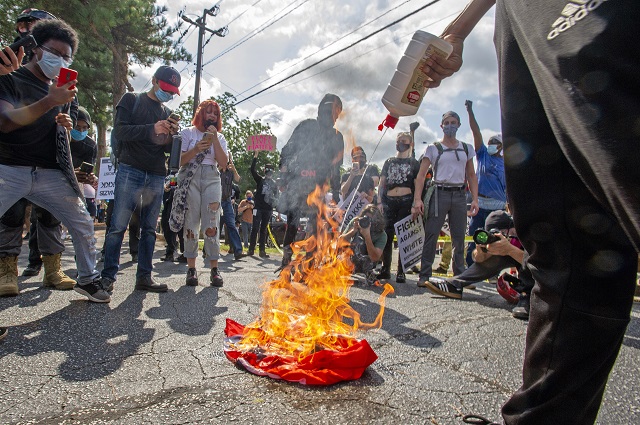 Counter protestors burn a Confederate flag during a rally in the city of Stone Mountain, August 15, 2020. Photo by Dean Hesse. 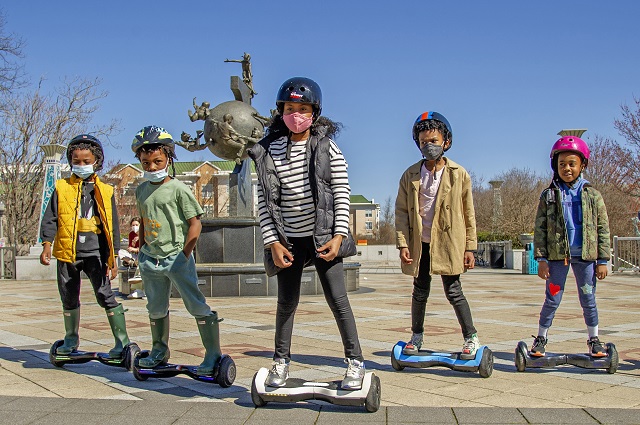 Children posing on their hoverboards came to the Decatur Square with their parents to take advantage of the beautiful weather on March 7, 2021. Photo by Dean Hesse. 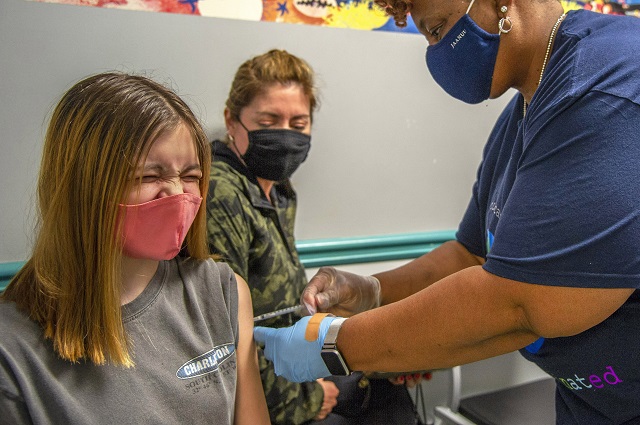 Reagan Johnson, 14, with her mother Yvette Johnson, scrunches her face as she gets the Pfizer-BioNTech COVID-19 vaccine from Registered Medical Assistant Melissa Dalton during DeKalb Pediatric Center’s vaccine clinic on May 12, 2021. Reagan said afterwards, “It was fun.” Photo by Dean Hesse. 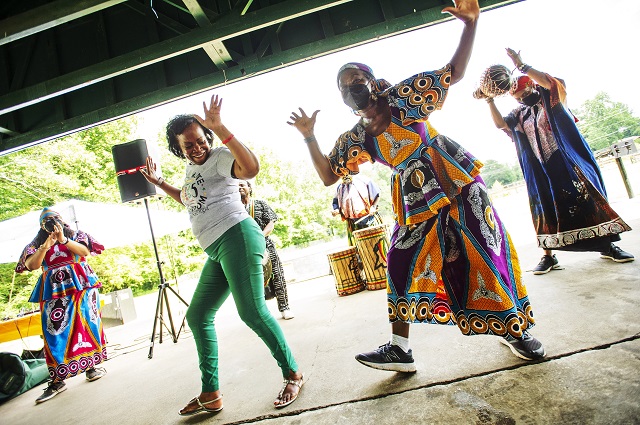 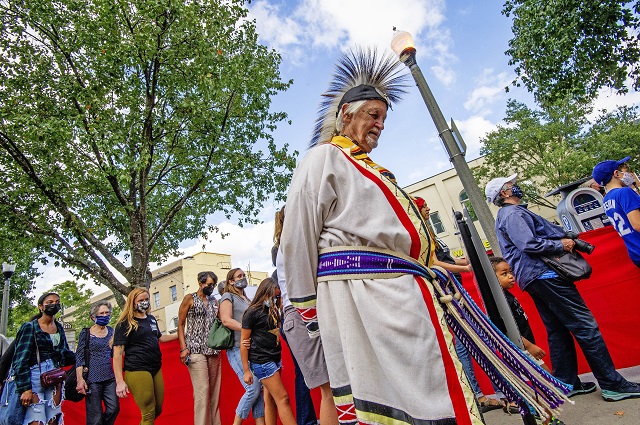 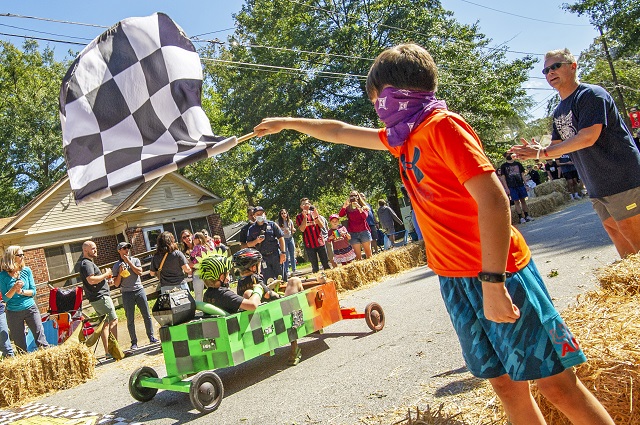 A team of racers cross the finish line during the 10th annual Madison Avenue Soapbox Derby in Decatur on Saturday, Oct. 16. Photo by Dean Hesse. 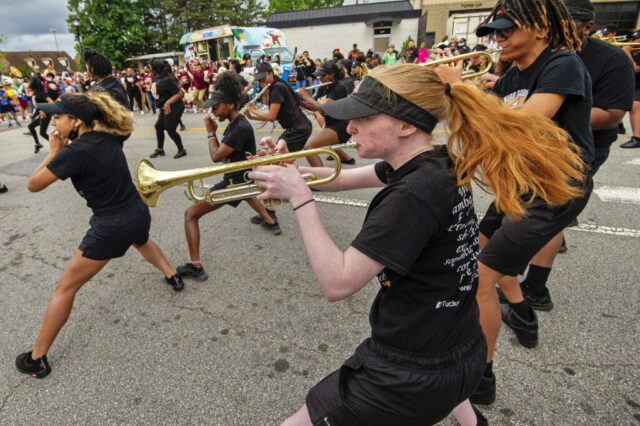 Tucker High School’s “Ambush of Sound” Marching Band take on Seed & Feed Marching Abominable during a “Battle of the Bands” on Tucker Day 2022, Saturday, May 7. Photo by Dean Hesse. 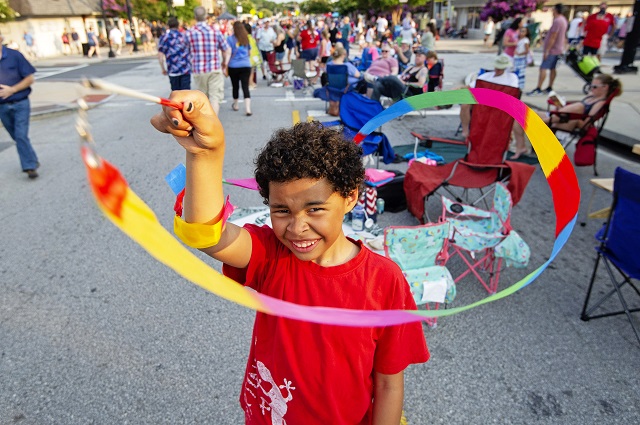 Nine-year-old Liam Ross twirls a ribbon on Main Street during the Tucker Celebration of Independence and Fireworks Spectacular on Saturday, July 3, 2021. Photo by Dean Hesse. 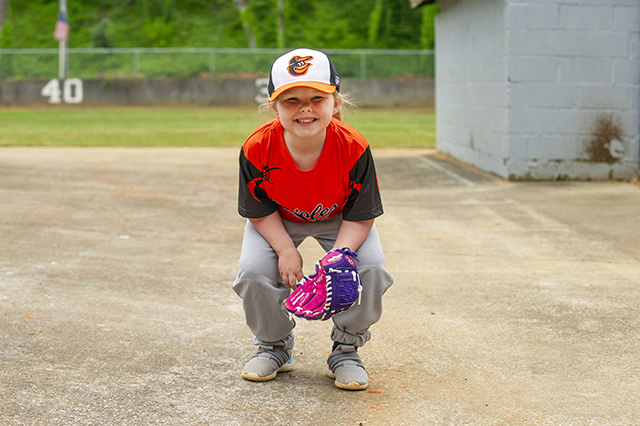 Griffin Wilson, 5, poses for a photo on Opening Day of the Tucker Baseball League at Fitzgerald Field on April 17, 2021. Photo by Dean Hesse.