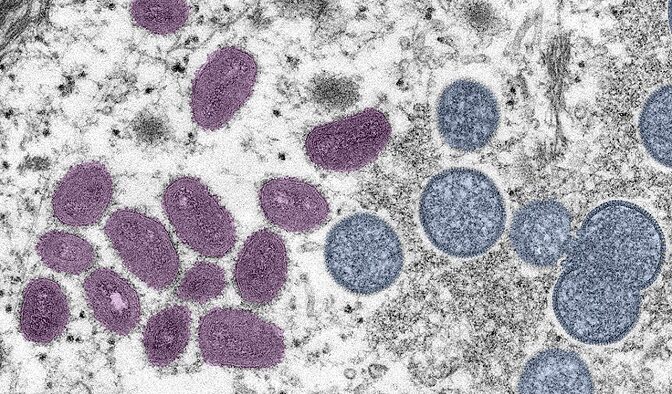 The monkeypox virus under the microscope. Image obtained from the CDC.
Share

Update: Following the publication of this story, the DeKalb Health Board sent the following statement about why it is declining to release the number of monkeypox cases recorded in the county. Here’s the Health Board’s full statement (with emphasis added by Decaturish):

Monkeypox cases have been confirmed in several metro counties, including DeKalb.

The current outbreak of monkeypox, in Georgia and globally, is overwhelmingly affecting men who have sex with men and contacts within their social networks. Monkeypox does not spread like COVID. The CDC believes the risk of monkeypox in the US is low. What is most important with monkeypox right now is ensuring testing and vaccination are available to individuals in the social networks primarily being affected by this outbreak.

It is also critically important that individuals with monkeypox strictly follow isolation guidance to avoid transmission to others.

The DeKalb County Board of Health is not releasing case counts because our Office of Epidemiology and Statistics is actively investigating case. Some of these cases may be confirmed, while others may not meet the case definition, after further investigation. As these numbers will likely fluctuate, it is our goal not to confuse the community and provoke additional questions about the validity of case data.

DeKalb County, GA — Georgia is reporting 289 cases of monkeypox, which according to the Centers for Disease Control makes the state No. 5 in the country for total cases reported.

But if you’re looking for data at the local level, good luck with that.

Decaturish asked the DeKalb Health Board if any cases had been reported in the county. A DeKalb Health Board spokesperson said, “The Georgia Department of Public Health (DPH) has not provided health districts a breakdown of cases by county. As DPH is leading the investigation, this information would have to be released by them.”

So, we asked Georgia DPH for this information.

“You will need to check with DeKalb County on how many cases they have,” the Georgia DPH spokesperson said.

When Decaturish said that the local health board referred our questions to Georgia DPH, the spokesperson for the DeKalb Health Board responded to say the county would not be releasing this data.

“We have received additional guidance from the Georgia Department of Public Health (DPH),” the DeKalb Health Board spokesperson said. “DPH has given each health district discretion as to disclosing county-level monkeypox data. At this time, DeKalb is not releasing county-level data.”

To see the number of monkeypox cases in each state, click here.

According to CDC, monkeypox is a rare disease caused by the monkeypox virus. It’s rarely fatal, the CDC says. Symptoms include:

– A rash that can look like pimples or blisters that appears on the face, inside the mouth, and on other parts of the body, like the hands, feet, chest, genitals, or anus.

“The rash goes through different stages before healing completely,” the CDC says. “The illness typically lasts two-to-four weeks. Sometimes, people get a rash first, followed by other symptoms. Others only experience a rash.”

The CDC provided the following prevention and treatment tips:

– Avoid close, skin-to-skin contact with people who have a rash that looks like monkeypox.Do not touch the rash or scabs of a person with monkeypox.

– Do not kiss, hug, cuddle or have sex with someone with monkeypox.

– Do not share eating utensils or cups with a person with monkeypox.

– Do not handle or touch the bedding, towels, or clothing of a person with monkeypox.

– Wash your hands often with soap and water or use an alcohol-based hand sanitizer.

– In Central and West Africa, avoid contact with animals that can spread monkeypox virus, usually rodents and primates. Also, avoid sick or dead animals, as well as bedding or other materials they have touched.

If you are sick with monkeypox:

– If you have an active rash or other symptoms, stay in a separate room or area away from people or pets you live with, when possible.
Vaccination

– People who may have been exposed to monkeypox, such as:People who are aware that one of their sexual partners in the past 2 weeks has been diagnosed with monkeypox

– Laboratory workers who handle cultures or animals with orthopoxviruses