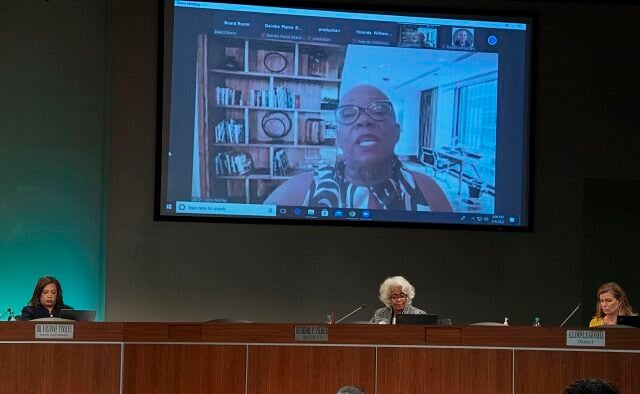 DeKalb County, GA — A recent state audit was the primary focus of discussion at the July 11 DeKalb Board of Education meeting. The audit found some “significant deficiencies,” but no “material deficiencies,” an improvement over previous years.

The Georgia Board of Education designated the DeKalb County School District as “moderate risk,” also an improvement over a previous designation of “high risk.”

The DeKalb County School District’s current CFO, Charles Burbridge, is credited with improving the district’s finances after previous assessments and late financial filings put the district’s credit rating at risk. Burbridge presented a report on the audit to the school board, emphasizing that more work needed to be done in the district, including in departments beyond his direct control.

“When a state auditor looks at a district, they look at more than just accounting. They look at internal controls throughout the entity,” said Burbridge.

“While there is good news in this year’s audit, there is work to be done,” said Burbridge.

Most board members gave Burbridge credit for improving the district’s finances over the past eighteen months.

“I just want to thank you for getting us from late and high risk to on time and moderate risk,” said board member Deirdre Pierce.

“Just in my years on the board, we have come light-years on the audit,” said board member Allyson Gevertz.

Burbridge, who has been CFO for the district since 2020, plans to retire soon. The board approved a $30,000 contract with Hazard Young Attea Associates to recruit a new CFO.

Board member Dr. Joyce Morley asked how the finance department planned to address problems with internal control and ensure continuity after Burbridge leaves the position. “I think that’s been a problem with finance and throughout the district, a lack of continuity,” said Morley.

Morley also complained about previous recruitment contracts, stating that they presented candidates who were not qualified and blamed previous superintendents and recruitment agencies for hiring “friends and family.” She stated that she believed agencies would present people who were already on their list to save effort and who hadn’t specifically applied for the job.

“That’s what happened with Dr. [Rudy] Crew. He said, ‘I didn’t apply, they called me,’” said Morley.

In 2021 DCSD paid Crew $750,000 to settle a lawsuit in which Morley was named as a co-defendant. Crew alleged that he was discriminated against due to his age and race. Court documents assert that Morley had complained to “multiple people” that Crew did not respect Black women because his late wife was white.

In response to a question from Gevertz, Burbridge said that MUNIS would resolve many problems including the significant deficiencies, however, said Burbridge, “A good tool does not replace the need for knowledgeable people to use it.”

Burbridge said that his objective was to leave behind a control structure that would continue to function in his absence.