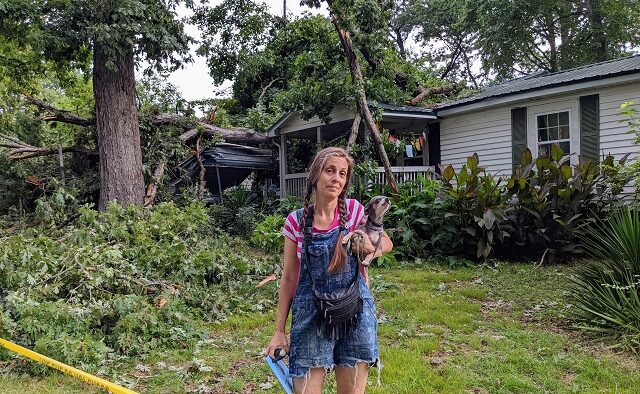 Brook Hewitt stands outside her home on July 12, 2022. Photo by Dan Whisenhunt
Share

Sometimes the universe conspires to put people in the same place at the same time.

As far as religion goes, I don’t believe in much of anything, but I believe that much.

About a month before my son was born, reporter Ellen Eldridge wrote a story about Brook Hewitt for Decaturish. It was a story of resilience, about a single mom who lost her job but pulled herself together to build a successful photography business. Little did I know, but two months later, Brook and I would be neighbors. I lucked out and found a cool neighborhood here in Scottdale. It’s still weird, in a good way. I’d see Brook out walking her dog, and we’d always chit-chat about this and that. About business. About her students. (She loves talking about her students.) About life.

If either one of us needed someone to feed the pets, pull the garbage can up, check the mail or jump off a car with a dead battery, all we had to do is pick up a phone. In early 2020, I was freaking the hell out. When the pandemic started, half my advertisers pulled their ads down – we were running numerous events ads – and my son’s Pre-K education came to an abrupt halt. With play dates out of the picture, I had to be my son’s teacher and best friend, in addition to being his father and a business owner. And my business was seemingly in free fall. Those were some long days.

But as always, Brook was there for us. Even though she had no shortage of clients who needed an outlet for their kids after the pandemic sidelined in-person learning, she made time for my boy. She took him on long photo walks every weekend. She didn’t ask for anything in return, but of course, I paid her. It was a dark time for the world, my family included. But Brook had our back. She gave my son something to look forward to.

Brook has always been a go-getter. She hustles to make ends meet when she comes up short. She’s always got a new plan in her back pocket when her plans fall through. While 2020 was a new experience for everyone, in some ways, Brook had been there and done that. She’s always found a way to survive when things aren’t going her way. As I navigated my own professional crisis in 2020, she was a source of inspiration for me.

As a teacher and a photographer, Brook has touched many lives. I was reminded of this over the weekend after a large tree fell on her house. The tree basically ate her home, as one of her friends put it. Early Sunday morning, I dragged myself out of bed and walked over to survey the damage. She lost everything, including her photography equipment. The tree totaled one of her cars. The house is probably not salvageable either. All things considered, her family is fortunate they didn’t get hurt.

I had multiple people contact me – people who didn’t know each other but knew Brook – asking me if I could put the word out about her Go Fund Me page. I’d already sent her some cash before the fundraising effort got underway, but I wasn’t surprised to see folks rally to help her.

Being the editor but also her friend, I debated whether I should put Brook’s business on the street, so to speak, but she’s decided to forgo pride and accept all the help she can get. (Also, the TV news is doing some stories on this, and I’ll be damned if I’m going to get scooped on a story happening on my own street.) So with that said, if you know Brook, or know people who know her, I encourage you to give her an assist. Brook is a good neighbor and good people. Both are often hard to come by.

Consider it an investment in keeping DeKalb weird, in a good way. To donate, click here.