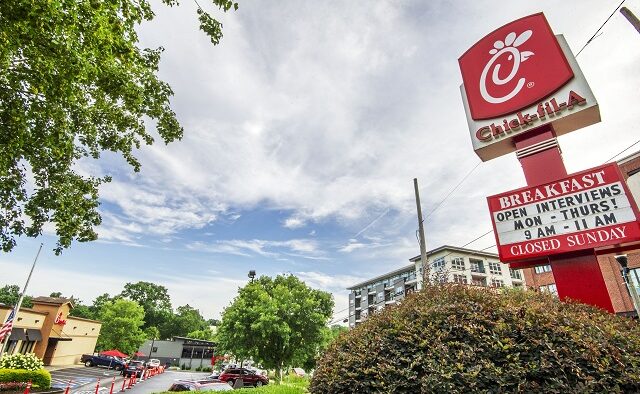 Decatur, GA — A former employee of the downtown Decatur Chick-fil-A filed a federal lawsuit last month alleging she was harassed and discriminated against for being transgender.

Chick-fil-A’s corporate office did not return a message seeking comment. Chick-fil-A hired Erin Taylor in August 2021. (In the lawsuit, she is named using her legal name.) She began training for a director of operations position at the Decatur restaurant, located at 105 East Trinity Place in Decatur. The lawsuit says another employee targeted Taylor with lewd comments. Taylor complained, and it eventually reached the franchise owner, Joe Engert, the lawsuit says. During a meeting with Engert and the restaurant’s kitchen director, Taylor informed them that she is transgender.

“The Franchise Owner responded by saying that it should be an honor that with Plaintiff being a transgender woman that someone liked her enough to hit on her,” the lawsuit says.

The franchise owner pledged to look into the situation. Following that meeting, the employee who had been harassing Taylor began making bigoted and homophobic remarks, the lawsuit says.

The complaint says word spread, and soon other employees joined in the taunting.

“Several employees began to intentionally misgender the Plaintiff and claimed that they had an odor due to her taking hormones to aid in their transition, when it was proven to be a faulty pipeline at the Defendant’s location,” the complaint says. “Defendant did nothing to stop the harassment, and its actions of disclosing that Plaintiff is transgender escalated the harassment.”

The employee who started the harassment continued working the same shift and was never disciplined, the lawsuit alleges.

“In addition to being harassed by co-workers, Plaintiff’s training began to change,” the lawsuit says. “Plaintiff [was] no longer…training for the Director of Operations position and any inquiries as to the reason for this was ignored.”

“One of the reasons stated was that they abruptly walked off their shift,” the lawsuit says. “However, this is not true. Plaintiff had been harassed by a Shift Lead and had been approved to leave the restaurant for that shift. In addition the Defendant claimed that the reason for the termination was also due to tardiness which resulted in one write up. However, Plaintiff has identified at least two other Director of Operations employees who have been tardy for shifts, but have not been terminated. These comparators do not identify as gay, lesbian, bisexual, or transgender. It is clear that Plaintiff treated less favorably due to her sexual orientation, supporting an inference of discrimination.”

The lawsuit is alleging sexual harassment and discrimination.

Her attorney, Jeremy Stephens, said the complaint speaks for itself.

“Anyone who views that complaint can see what Ms. Taylor went through, they can see that something certainly needs to be done about this,” Stephens said.

Chick-fil-A has been boycotted by many since 2012 after Chairman Dan Cathy said he opposes same-sex marriage and that the company’s executives donated money to anti-LGBTQ groups. In the past, Chick-fil-A has said it would stop donating to these groups, but the restaurant chain has not been able to shake its reputation.

The city of Decatur, which has long had a reputation as being a city friendly to the LGBTQ community, named Engert a “Hometown Hero” in 2020.

“Joe is huge supporter of many community projects throughout Decatur and enjoys being behind the scenes,” the nomination form on the city’s website says. “He doesn’t do it for recognition, he just likes to give back!”

Editor’s note: The lawsuit lists the plaintiff’s legal name, but she uses a different name. This story has been updated to reflect her current name.