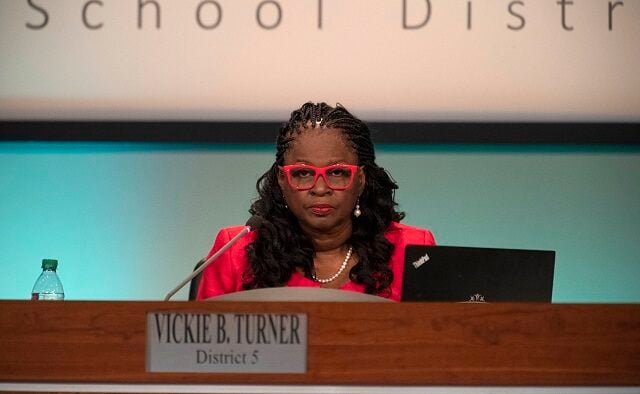 DeKalb County, GA — The DeKalb School Board stunned the community in April when it fired superintendent Cheryl Watson-Harris and replaced her with Interim Superintendent Dr. Vasanne Tinsley

Soon after, Tinsley revealed that some board members had approached her about replacing Watson-Harris a day before she was fired. The firing was approved by four board members: Board Chair Vickie Turner, Vice Chair Diijon DaCosta, and DeKalb County School Board members Dr. Joyce Morley and Anna Hill.

On July 29, Day 2 of the DeKalb School Board’s retreat, Board Chair Vickie Turner indicated she’d like to keep Tinsley as Watson-Harris’s permanent replacement. Turner gave her opinion after school district spokesperson Donald Porter asked her, “Who would make a great superintendent for this district?” at the end of an interview conducted by Decaturish.

“I think we’ve got a great superintendent right now,” Turner said. “…I base that on — it’s not a preference, not a personal thing — I like a worker bee. She’s rolled up her sleeves, boots on the ground. She has institutional knowledge. She understands historical value. You can’t just run game. You can’t just say anything. She’s a thinker. She’s smart as a whip. I think we’ve already got what we need. That’s just me. But I’m only one vote.”

Turner said that would give the district plenty of time to do a search while giving Tinsley “time to do her job.”

School Board Member Marshall Orson said he would like to move faster, saying it shouldn’t take until December to find a search firm.

“I would prefer we have a search firm in place by September, quite frankly,” Orson said. “There’s not a huge universe of search firms.”

Board member Allyson Gevertz said given that the community went through a search process only two years ago, the board may not need to collect as much community input as the board did the last time. DaCosta said he was fine with the timeline Turner proposed.

But Morley objected that the search was moving too fast and berated board members for not telling her about a timeline before the meeting. Morley hasn’t personally attended any recent meetings, and instead has attended them virtually via Zoom. The July 29 retreat was no exception.

“This is a business, the business of educating children. We need to take it seriously,’ Morley said. ” ….I shouldn’t come here and be shocked by what’s being put in front of me at a retreat.”

Morley spoke at length for several minutes, chewing out the board for moving too quickly and urging the board to slow down. Board members and other people gathered in the conference room of the Hyatt hotel on Summit Boulevard looked down at their phones while she made her comments, which was the case for much of the retreat whenever Morley weighed in via Zoom. 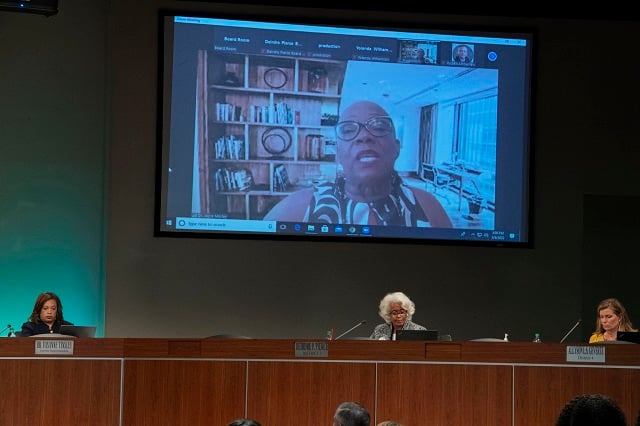 “We’re still going down the same lane… the insanity lane,” Morley said. “In a sense, I don’t need to be a part of this conversation because the decisions have already been made.”

Morley said this isn’t about her.

“It’s not about Joyce Morley, it’s about the children of DeKalb. And I am just very, very disappointed we’re doing things the same way,” she said. “I’m just suggesting we take our time and slow this thing down … Ms. Turner, if there’s a proposal that’s going to be put out there, I would appreciate some level of respect.”

“Dr. Morley, you are saying that we slow down, but can you give us some more substance to that?” Turner asked Morley. “What do you propose?”

“I propose you look at the same mistakes you made in the past,” Morley said. “I put them in emails. I’ve been saying them over and over every year.”

Turner said the board was merely having a discussion about the search and said nothing had been settled.

Board member Anna Hill favored getting on with hiring a search firm.

“My perspective is not rushing means the sooner we hire a search firm, the longer we have to consider community input,” Hill said.

Turner said the board would resume the discussion in August, possibly in a closed-door executive session.

Decaturish asked Turner if she thought the board would be able to attract quality superintendent candidates to the DeKalb County School District, given how many the school board has churned through recently. Watson-Harris was the seventh superintendent in 12 years.