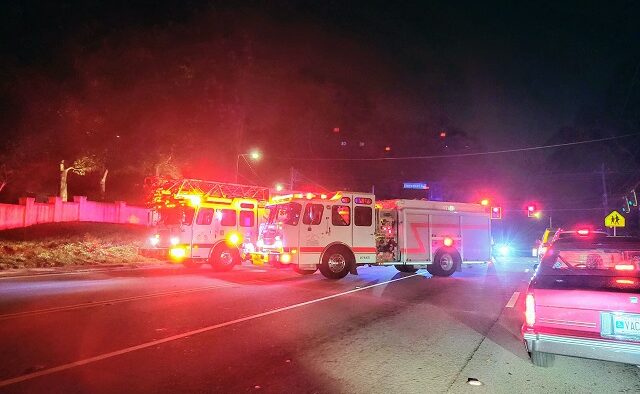 A photo from the scene of the crash that caused a pedestrian fatality on Scott Boulevard. Photo provided to Decaturish
Share

Last Monday, a Decatur resident was hit by a car while walking in a crosswalk across Scott Boulevard at Clairemont Avenue. While the assailant sped away, the victim was rushed to a hospital and later died. This isn’t the first deadly incident on this dangerous roadway, but Decatur residents want it to be the last. It’s time for the Georgia Department of Transportation to do its duty and protect the citizens of Georgia.

Statistics prove that GDOT has failed at this job in recent years; Georgia had an estimated 348 pedestrian traffic fatalities in 2021, an increase of 23.8% from 2020 and 45.6% from 2019. And pedestrians are not the only ones dying on our dangerous roads. Drivers and their passengers are also dying at increasing rates, and the carnage shows no signs of decreasing. 2022 is set to be the most deadly year on US roadways in years. A person is more likely to die in a crash today than any time over the past two decades, and the numbers keep going up.

Each crash has varying factors: distraction, intoxication, recklessness, carelessness. But one factor is common in almost all lethal crashes: high speeds.

If a pedestrian is hit by a car traveling at 40 mph their chance of dying is 85%. When the speed is lowered by just ten miles per hour (to 30 mph) the death rate falls to around 40%. At 20 mph the death rate is close to zero.

Investigators may never know all the factors involved in Monday’s crash on Scott Boulevard because the victim is dead, and the killer sped away, but anyone who has walked or driven on Scott can attest to the dangerous environment along that speedway. While the speed limit on Scott Boulevard is 40 mph, drivers routinely drive much faster. Those who drive within the limit find themselves being tailgated and victims of reckless driving.

Neighbors have repeatedly raised concerns to city officials and asked them to do something, pointing out that the street is a vital walking route for school kids to get to Westchester Elementary, with parts of it designated as a Safe Route to School. Yet city of Decatur officials have little power to make any changes because Scott Boulevard is a State Route, and therefore any speed limit or traffic-calming measures must be approved by the Georgia Department of Transportation.

Yet, the Georgia Department of Transportation is maddeningly and bafflingly reluctant to change speed limits, even though doing so would protect Georgia citizens.

We know first-hand of the challenges of working with GDOT to affect safety measures along dangerous residential roadways. As advocates for Calm Candler, a group of concerned citizens, we have struggled for years to improve safety along South Candler Street, where many crashes (some deadly) have occurred over the past decade due to dangerous speeds. South Candler is also a State Route, so we have gotten to understand how the Georgia Department of Transportation views our city streets.

While we have made some progress to implement safety measures, it’s taken years, multiple petitions, countless meetings, and even protests to move the Georgia Department of Transportation to work with the City to install new crosswalks with lights, move another crosswalk, add a median to prevent illegal passing, and reprogram a pedestrian signal to provide a couple of extra seconds of “lead time.”

Yet still, the Georgia Department of Transportation has failed to solve the fundamental problem: high speeds and dangerous driving.

The speed limit on South Candler Road is 35 mph, but as on Scott Boulevard, most drivers go much faster. One of the first things we did was to ask Decatur Police to enforce the existing speed limit. We learned that they could not. Due to Georgia state law, a radar reading must be at least 10 mph above the posted limit to be admissible as evidence in court, except in certain limited cases. Police told us there’s nothing they can do about the thousands of drivers who speed along Candler at 45 miles per hour. The same problem exists on Scott Boulevard, whose posted speed limit of 40 mph can only be effectively enforced beyond 50 miles per hour – certain death for a pedestrian when struck.

We concluded that our best course of action was to request a reduction in the speed limit. We did so in two petitions that we delivered to the Decatur City Commission, one in 2015 and one in 2018. Each was signed by hundreds of people. The commissioners and city staff were supportive but said they could not do anything without the approval of the Georgia Department of Transportation because Candler, like Scott and so many of Decatur’s most dangerous roadways, is a designated State Route.

So city officials appealed to the department, and so did we, asking the Georgia Department of Transportation to lower the speed limit. They refused. Despite petition after petition, plea after plea, crash after crash, death after death, they have insisted that they must stick to their current dangerous procedures for determining speed limits.

The Georgia Department of Transportation’s officials have made clear that they will only set a speed limit according to a procedure called the 85th Percentile Rule. According to this method, they first measure the rates of speed of drivers along a roadway. Then they examine the data to determine the speed that 85% of drivers do not exceed. That, then, is determined to be the speed limit.

So, for example, on Candler Street, according to the Georgia Department of Transportation, the 85th Percentile Speed is around 40 mph, and so, according to its rubric, 35 mph is considered a safe speed limit. The rule effectively takes drivers as the norm-determiners, under the assumption that most drivers will drive speeds that they find are safe.

But what about other road users? What about the kids walking to school, the runners waiting at crosswalks, the bicyclists trying to find a safe route to work? A speed that feels comfortable to a driver in a car is terrifying to a parent walking with their child on a sidewalk or a student waiting for a safe opening to step into a crosswalk.

The 85th Percentile method has come under increasing scrutiny, with many organizations calling upon departments of transportation to adopt safer methods for setting speed limits. Even the United States Department of Transportation has addressed the misuse of the 85th percentile principle in a 2015 handbook, stating that alternate measures should be used “for roadway segments that experience high pedestrian and bicyclist activities.” All Decatur roads meet this criterion.

We’ve asked the Georgia Department of Transportation to consider alternate rubrics for setting speed limits, pointing out that their 85th Percentile measure is perhaps reasonable for roads through less densely populated areas but certainly not for a city filled with pedestrians, cyclists, and schoolkids. We’ve asked the department to adopt a contextual, risk-based procedure, considering factors such as habitation density, pedestrian activity, the frequency of curb cuts, the number of intersections, the nearness of schools, etc.

They won’t do it. They have said repeatedly that they will only consider lowering the speed limit when their data show that 85% of drivers are driving more slowly. They insist on letting fast drivers set the speeds that all of us must live with. Or die with.

It’s hard not to feel that the people in charge at the Georgia Department of Transportation don’t really care about our children, don’t care about us, and don’t even care much about the drivers themselves because slower speeds protect everyone. If you lower rates of speed, the number of crashes decreases, and those crashes that do occur cause fewer deaths and injuries. This is well known, which is why so many cities are committed to decreasing motor vehicle speeds, knowing that it’s the best way to improve safety outcomes.

The people at Georgia Department of Transportation will tell you that they do care. They’ll say that the 85th Percentile Rule actually increases safety because it indicates the natural speed for a roadway, and drivers instinctively know what is safe. They’ll claim that lowering a posted speed limit doesn’t really make that much of a difference because it’s the physical design of the street that determines speeds.

Certainly, it’s true that the physical design of a roadway is an important factor. And we are grateful for the recent changes that the Georgia Department of Transportation has allowed the city – and even helped the city – to make on South Candler. But more changes are necessary to improve safety, not just on Candler Street, but also on Scott Boulevard, North Decatur Road, College Avenue, and so many other dangerous roadways in and around the City of Decatur. An intersection designed for and around pedestrians might have prevented Monday’s death.

Altering the physical design of our streets should be a long-term goal. But in the meantime, lowering speed limits is a quick fix. Evidence shows that changing a posted speed limit does indeed have a significant effect on driver behavior.

It’s time for the Georgia Department of Transportation to set speed limits based not just on the behavior of the drivers who speed through our neighborhoods, but also on the safety of the people who live in them.

We call upon the Commissioner of the Department, Russell McMurry, and the department engineer in charge of Metro Atlanta and Decatur, Kathy Zahul, to act now. Immediately abrogate the use of the 85th Percentile method for urban areas and adopt procedures that prioritize the safety of all street users, particularly those who get around on foot, in wheelchairs, or on bikes. There’s no time to waste.

You have the power and the duty to prevent more deaths and shattered lives.