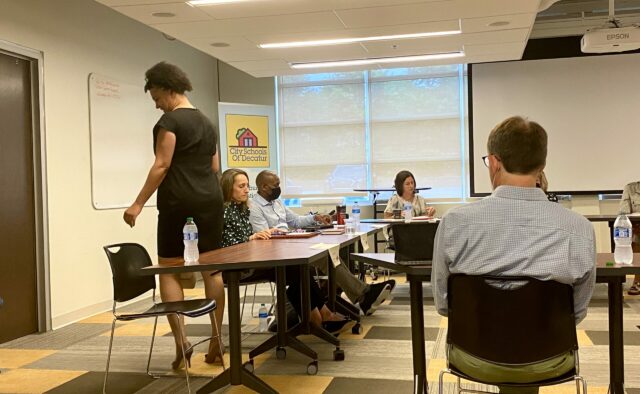 Decatur City Commissioner Lesa Mayer (left) walked out of a joint work session between the city commission and school board after feeling like the boards were glossing over the school district's millage rate. Photo by Zoe Seiler.
Share

Decatur, GA — During a joint work session between the Decatur City Commission and the City Schools of Decatur School Board, a commissioner walked out of the meeting because she felt the two boards weren’t taking advantage of an opportunity to have tough conversations together.

Commissioner Lesa Mayer told Decaturish that she felt the work session was performative, and she didn’t want to be part of that.

During the work session, agenda items included an update on the track and field at Legacy Park, an update on the city’s parks and recreation master plan, updates on affordable housing, a discussion on reapportionment, an overview of the school district’s strategic planning process and an update on CSD’s 2022-2023 enrollment.

Mayer said during the meeting that the boards need to have a conversation as a unified body about the lack of facilities that are available to students to compete with other school districts, among other tough conversations.

“I can go to any park and enjoy it because I don’t have a need of a student-athlete, but I think that the responsibility really lies with the City Schools of Decatur to ensure that our student-athletes have the facilities that they need to be able to compete with the neighboring school districts’ facilities, resources and spaces,” Mayer said. “The most complaints that I ever receive about facilities are generally in the parks that are located in the historically Black district of Decatur, so I get complaints about McKoy, Ebster and Oakhurst Park.”

Mayer also has concerns about increasing school taxes and their effect on housing affordability in the city of Decatur.

The city is advancing and expanding the amount of affordable housing that’s in the city, City Manager Andrea Arnold said. The city’s affordable housing projects include the South Housing Village at Legacy Park, Park 108 and the cottage court project.

“It is so disappointing to me that we are glossing over that,” Mayer said during the work session. “I’ve never been in a meeting with the city commission and the school board members ever, and I don’t think the conversation we are having today best serves our community. I think that these are updates that we have all received in different forms, in different meetings, and I really hate that we did not take advantage of this opportunity to have tough conversations about real issues that matter to our community. As respectfully as I can to all of you [board members], I’m going to actually step out. I’m going to demonstrate my right to peacefully protest.”

She added, she couldn’t be part of a discussion that glossed over issues the boards could address together. She also declined to attend the Aug. 1 Decatur City Commission meeting, saying she didn’t want to vote to approve the school district’s millage rate. Commissioners are legally obligated to approve it, commissioners said during their regular meeting.

Mayor Patti Garrett asked if Mayer told anyone she wanted to have something different on the agenda, “because I was not aware of that.” Mayer offered no additional comments before she left the meeting.

School Board member Hans Utz said that affordable housing is more than the buildings, and part of aging in place is people being to afford the space that they already have.

“We just went through an exercise with the senior homestead exemption where a part of the communication associated with that was focused around responsible tax policy and ensuring that we’re not making the community too expensive for the seniors that are already here,” Utz said.

He added that CSD is substantially increasing the tax burden for residents for this year.

The school district’s millage rate is 21 mills. While the rate remained the same from 2021 to 2022, the increase in property values from DeKalb County is still causing homeowners to pay more in property taxes this year.

During the city commission’s regular meeting on Monday, the board approved an ordinance to levy the school taxes with a 4-0 vote.

Mayer sat on the steps of city hall during the commission’s Aug. 1 meeting.

“I didn’t go to the city commission meeting because commissioners are obligated to adopt school taxes … the vote on the city commission agenda is simply a formality, I had the same concern last year and was told it was also something I made an oath to do when I was sworn in as commissioner, and this is a requirement. So, I expressed my concerns but attended the meeting last year and voted yes, and as I understood it was a requirement …,” Mayer told Decaturish.

This year, Mayer decided to show her objection to being required to approve the school system’s millage by not showing up to the meeting.

She does not fault the other commissioners for voting to levy the school millage rate.

“I think that the difference here is I am not comfortable with the norm and I would like to push against the norm with the hopes that eventually we can affect change. That’s an uncomfortable space to be in. I’m OK with being uncomfortable. …,” Mayer said.

Arnold said, during the regular meeting, the school board recommended keeping the millage rate at 21 mills and the city, as the levying authority, is required to levy the amount requested by the school board.

The city commission cannot change or alter the school district’s millage rate. The city is bound by its charter to levy what the school board asks for, Mayor Pro Tem Tony Powers said.

Mayer said there needs to be a different dynamic between the city commission and the school board.

The city and CSD and the city have operated in silos, Mayer said, as though one board does not affect the other. She’d like to see the boards work together to solve shared issues like the school district’s millage rate impacting affordability, concerns around not having enough athletic facilities for students, and gaps in performance for students who seem not to be getting the same resources.

“Really it is silly for us to think the quality of a school system does not impact every other resident of a city, it is silly for us to think that the way a city operates does not affect a school system,” Mayer said. “We make decisions that affect everyone. City Schools of Decatur make decisions that affect everyone as well. And we just don’t operate in a way that supports that we understand that impact, and we have a tough time having uncomfortable conversations.”

School Board Chair Jana Johnson-Davis agreed there needs to be more in-depth conversations about these topics. She perceived that Mayer’s statement and walking out of the meeting was more about the lack of substance during the conversation and not as much on the district’s budget.

“I don’t think that our budget is out of control and I think that it is reflective of the times we are in right now, in terms of everything is more expensive, we’ve given our staff step and COLA increases, we have hired an equity director to help us continue to try and address equity in the district and disproportionality and the achievement gap,” Johnson-Davis said.

During the work session, she suggested the boards possibly have quarterly meetings instead of meeting once a year or have a retreat to work through their concerns.

In three years, CSD’s budget has grown from $72.4 million to about $82 million in Fiscal Year 2021. At the Aug. 9 school board meeting, the board will consider a budget amendment to account for additional funding for staff positions. If approved, that would put the district’s budget at about $88 million for fiscal year 2023. Much of that growth has come from hiring teachers and educational staff, budget documents show. In Fiscal Year 2019, the school district budgeted $47 million for instruction. In Fiscal Year 2021, that cost grew to $52 million for instruction.

The Decatur School Board discussed the district’s enrollment report during a meeting in November 2021. In the district’s October 2021 enrollment count, the total enrollment was 5,477 students, which is 143 students less than 2020. Before 2020, the school system experienced growth every year, but has had decreased enrollment for the past two years, according to the report. For more information about CSD’s enrollment trends, click here.

Johnson-Davis said she doesn’t think the district is overstaffed on the instructional side of its budget.

“I don’t think we have too many teachers. Part of the thing that makes city schools of Decatur is our small class sizes,” Johnson-Davis said. “We’re not going to be cutting any teachers because it’s not necessary.”

Utz later told Decaturish that he’d like to see the school board take a tighter and closer look at the budget. He noted that what truly sets the tax rate is the size of the district’s budget.

Editor and publisher Dan Whisenhunt contributed reporting to this story.