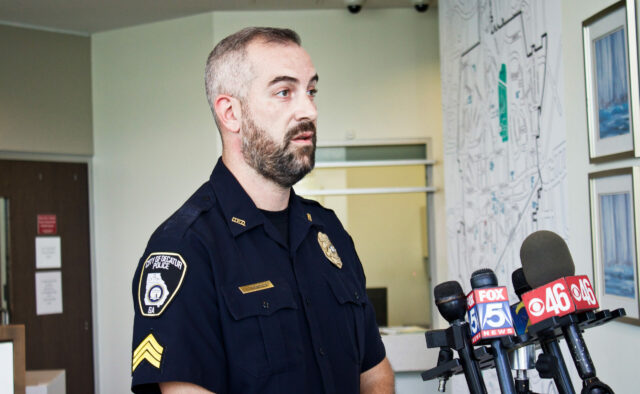 Decatur Police Sgt. John Bender gives an update on Aug. 16, 2022, on an incident where a pedestrian was struck by a car at the intersection of Clairemont Avenue and Scott Boulevard. Photo by Zoe Seiler.
Share

Decatur, GA — Decatur Police have identified the pedestrian who was hit by a car on Monday, Aug. 15.

Sgt. John Bender identified the victim as Ajay Patil, 42, of Decatur, he said during a press conference on Tuesday, Aug. 16. Patil has died as a result of the incident.

Police are also asking for the public’s help identifying the driver who hit Patil and then left the scene.

On Monday, Decatur Police responded to the intersection of Clairemont Avenue and Scott Boulevard around 11:35 p.m. about an incident involving a pedestrian, Bender previously said.

Patil was walking southbound on Clairemont Avenue in the crosswalk and was struck by a vehicle that was traveling eastbound from Atlanta toward unincorporated DeKalb County.

“The male that was struck suffered serious injuries. He was transported to a local area hospital, where he later passed away from his injuries,” Bender said during the press conference. “Currently, investigators are reviewing quite a bit of video cameras in the area and talking to different witnesses.”

A witness said they saw a white or light colored vehicle in the area. Investigators are following up on that lead, Bender said. He added there should be front end damage to the vehicle, but does not know how extensive the damage would be.

“Obviously any incidents like this where the loss of life happens so tragically and suddenly, it hits us very hard at the Decatur Police Department, and it hits close to home,” Bender said. “We’re doing everything that we can to solve this. Somebody out there knows something, saw something or knows the person involved in this, and if they do, we ask that you please contact us.”

“If you can provide any details about the victim’s identity, witnessed the accident, or know of a vehicle that may have been involved, please contact the Decatur Police Department at 404-373-6551 or Crime Stoppers Atlanta at 404-577-8477 and remain anonymous,” Bender previously said.